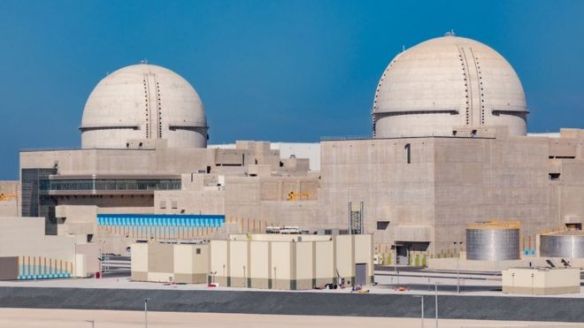 On the occasion of Eid ul Azha, Aug 1, United Arab Emirates becomes the first Arab country to successfully launch a nuclear power plant, Barakah, using nuclear energy as a source for sustainable energy requirements. It is a series of international accomplishments by UAE, a jewel in its crown just a fortnight after the launch of Mission Mars “Hope” that clearly shows its zeal to emerge as the next global power particularly in the Arab and Middle East region.

It was announced by Prime Minister and Ruler of Dubai, His Highness, Sheikh Mohammed bin Rashid Al Maktoum in a tweet, “We announce the UAE’s success in operating the first peaceful nuclear energy reactor in the Arab world, at Barakah Nuclear Energy Stations in Abu Dhabi… The work teams succeeded in loading nuclear fuel packages, carrying out comprehensive tests, and successfully completing the operation.”

Korea Electric Power Corporation (KEPCO) and Emirates Nuclear Energy Corporation (ENEC) jointly developed the Barakah plant to reduce its dependence on Oil for Energy generation. Unit 1 serves as the first step towards a four reactor nuclear plant, finally began operating with the construction of Unit 2 and 3 in its final phase. Once completed, the Four Units will produce 5.5 GW of electricity. UAE claims the goal is to achieve a quarter of its electricity need in reliable, safe, and emission-free methods spending billions to the development of renewable energy by 2050.

Emirates Nuclear Energy Corporation issued a press release — “The start-up of Unit 1 marks the first time that the reactor safely produces heat, which is used to create steam, turning a turbine to generate electricity.” Chief Executive, Mohamed Al Hammadi praises the historic achievement being a result of over a decade of vision, strategic planning, and program management. He says, “Despite the recent global challenges, our team has demonstrated outstanding resilience and commitment to the safe delivery of Unit 1. We are now another step closer to achieving our goal of supplying up to a quarter of our Nation’s electricity needs and powering its future growth with safe, reliable, and emissions-free electricity.”

President, Khalifa bin Zayed Al Nahyan, congratulated on the opening of Barakah Nuclear Energy Plant, “This milestone, which comes a few days after the launch of the Hope probe Mars mission, confirms that our state guided by Emirati cadres is steadily progressing ahead with well-weighed plans towards building a robust knowledge base in all fields.” He further says that UAE has made a ‘quantum leap’ in its pursuit of sustainable energy development, assuring the operations will thrive in accordance with the highest global security standards.

The initiatives like Mission Mars or ‘Hope’ that was successfully launched in July makes UAE, the only Arab country to embark on a space mission carving a niche in Science and Technology. The emirate is not confined to one sector which was clearly visible from the formation of Arab Space Cooperation Group with 11 countries in March 2019 – Saudi Arabia, Oman, Kuwait, Egypt, Bahrain, Morocco, Algeria, Lebanon, Jordan, and Sudan to ‘empower the Arab world in the global space industry.’ UAE aims to diversify its world image with geopolitical advancements and accomplishments in every major field like tourism, investment, business, education, climate safety, etc.

International Atomic Energy Agency (IAEA) has already reviewed the project giving it a green signal along with the United States that has signed the Nuclear Energy Cooperation Agreement in 2009 with Emirates. UAE can receive technical assistance and nuclear supplies from the States but it has restrained the supply of Uranium that could possibly lead to nuclear weapon advancements. IAEA acknowledges the efforts “achieved its first criticality” – that is, generation of a controlled fission chain reaction.

Director General of World Nuclear Association, Agneta Rising praises Barakah, “This is a great achievement for all those working at Barakah. The reactors there will generate clean electricity, highly skilled jobs, and economic growth for many decades. Barakah will soon be joined by reactors under construction in Belarus, Bangladesh, and Turkey. We need to see this repeated again and again in more newcomer countries to have truly effective decarbonisation and deliver a cleaner and economically stronger tomorrow.”

The Barakah plant located in Al Dhafra is closer to Qatar than Abu Dhabi. Qatar, which is a regional rival of Saudi Arabia and UAE has been skeptical about recent developments issuing a complaint last year says, Barakah is a “flagrant threat to regional peace and environment.” However, such factionalism doesn’t affect much to its pursuit of dominance in the region. At a time when the Muslim world is divided into camps, Iran and Saudi Arabia at opposite ends, Yemen crisis, Turkey’s rise of fundamentalism and unrest in Syria; UAE is definitely striving towards becoming a leader, the third nuclear competent state in the Arab world after Israel and Iran.

The recent achievement makes UAE a regional heavyweight, a key attraction to future business developments and investments. The benefits are multifold as there will be a huge profit to real estate and construction, human resources, and accentuating global exposure to the Gulf. UAE is emerging as a game-changer in the Arab world through its congenial relationship with Saudi in the region and strategic alliance with the US and Japan. The project is part of a larger plan connecting Bahrain, Egypt, Jordan, Saudia Arabia with UAE.

Barakah is seen as the Gulf’s pursuit of Nuclear weapons as nuclear plants are capable of developing a weapon. Nuclear Power may offer alternate muscular independence as Saudi’s clandestine programs to get equipped with it, is a reaction to the attack on its Oil refineries by Iran and its allies in Yemen that did not bring any practical help from the US. UAE’s proximity to Saudi may serve as a strategic plan to combat internal rivalry in the near future if required. However, UAE has repeatedly assured that it is strictly for energy requirements and to reduce its dependency on Oil and Natural gases. The Abu Dhabi model aims towards climate-friendly energy developments, decarbonisation, and electrification of energy sources along with its commitment towards the Non-Proliferation treaty to secure international cooperation and regional peace.