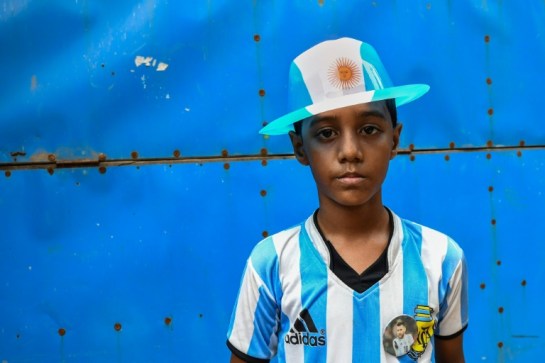 A Bangladeshi kid in Argentina jersey

2018 Football World Cup frenzy in Bangladesh has left everyone astounded. Entire nation seems to have gone crazy over this year’s championship tournament. Supporters have divided themselves among their favourites and doing the most unthinkable to reveal their choices.

For example, a guy in a village, a supporter of Germany, sold a piece of his land and made a 5-km long German flag to reveal his Cup alliance. In another case, an entire village which is a supporter of Argentina has painted the local school in blue and white – Argentina’s jersey.

Flag makers are making roaring business mainly of Argentina’s and Brazil’s flags– the two most favoured teams of the Bangladeshis such that their flags now fill the skyline of this country of 160mn people. Furthermore, Gulf Times reports that “Supporters of the two teams hold flag processions to show their loyalties…motorcycle rallies are staged by hundreds of rival supporters waving football banners.” 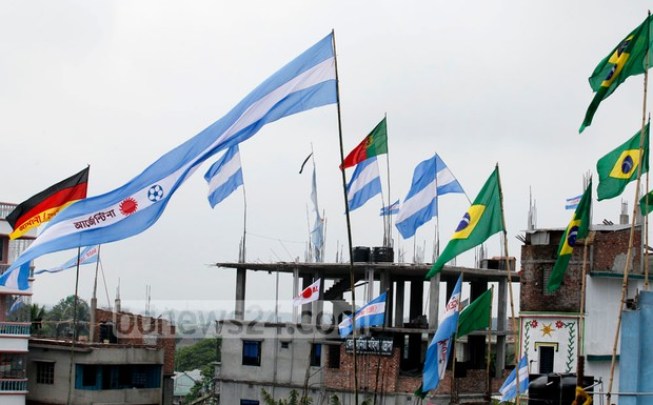 But what is also most interesting is that while the soccer frenzy in Bangladesh – not a cup contender itself – has reached a crescendo, a poll in Brazil, a serious contender for the championship, reveals that only 53% of Brazilians are interested in the Game.

Some regards Bangladesh’s soccer hoopla funny. Some as pure entertainment and yet others see this as madness and stupidity and explain the whole thing as ‘Begani shaadi me Abdullah diwana’(Abdullah going crazy at someone else’s wedding) or ‘Jar biye tar noey, Nepoey mar e doi’ (an outsider feasting away more excitedly than the groom) syndrome – a sort of intellectual viciousness of the Bangladeshi society as a whole.

Like Bangladesh its Bangali cousin across the border, people in West Bengal are not exactly lagging behind – there from the ministers to rickshaw pullers everyone is excited and have picked their favourites and are busy planning times to watch the game. But in comparison to Bangladesh’s football fever, theirs is a sneeze!

The frenzy also has had a sad side to it, “…a 12-year-old boy died after being electrocuted while putting a Brazil flag on a roadside pole.”

So why is this collective craziness over an object in which Bangladesh itself is not a contender, not by years? Some argue that the hype over the Ball has little to do with the game, rather, this is a rare opportunity for people to indulge in an affordable entertainment for an entire month. Some also believe that the hype around the ball reveals a familiar characteristic of most Bangladeshis – fondness for frivolities!

However, rival passions for the Cup may also be portraying another interesting aspect which is reminiscent of political behavior of most Bangladeshis – divisiveness and menacing friction in the exercise of choices. The way the Bangladeshis align themselves politically mutually exclusively between the two political parties, namely Awami League (AL) and Bangladesh Nationalist Party (BNP) they seem to be doing exactly the same in expressing their allegiance towards the two favourites of the Game, Argentina and Brazil. Characterized by similar passion, rusticity and mutual intolerance Bangladeshis are so dangerously divided in expression of their allegiance that AFP reports that “The World Cup is arousing high passions in Bangladesh, where machete-wielding fans of Brazil and Argentina have clashed in the streets.” Now this is interesting. Why is it that in Bangladesh all contestations from politics to sports end up in mutual intolerance and violence? Perhaps a social-anthropologist is in a better position to answer this but could it be because Bangladeshis are only superficially genteel but fundamentally vicious?

Similarly, the way Bangladeshis intensely but divisively worship their two political heroes, such as Hasina and Khaleda Zia, they have also emotionally attached themselves to the two stars players of the game – Messi and Neymar – with familiar unhealthy rivalry.

The Cup passion in Bangladesh may also be unravelling another interesting dimension and this is also political. Characterized by two interconnecting phenomena, Bangladesh’s political culture has undergone drastic changes in recent years especially since 2008. Firstly, Bangladesh’s democratic space has been steadily shrinking and freedom of expression and freedom to choose and elect leaders/parties by its people have become all but non-existent. Secondly and by now this is an open secret and an aspect that has also been confirmed in his autobiography by Mr. Pronob Mukharjee, former president of India that his country has been playing a key role in manipulating and influencing Bangladesh’s election outcomes and in doing so it has made its due contribution furthering of denting of Bangladesh’s democratic space and in the process stifled its people’s capacity to choose its leaders in their own terms so much so that the latter have become a non-entity in any election such that at the advent of Bangladesh’s next general election due end this year, the two main political parties, Awami League and BNP,  are openly lobbying Modi and not their own people, the voters – a norm in an election-  for support to ‘win’. Thus could it be that Bangladesh’s Cup excitement is neither a frenzy nor a stupidity but a political statement by the rank and file where they are seizing a rare opportunity to express themselves freely in choosing, devoid of intimidation and rigging from both within and outside?