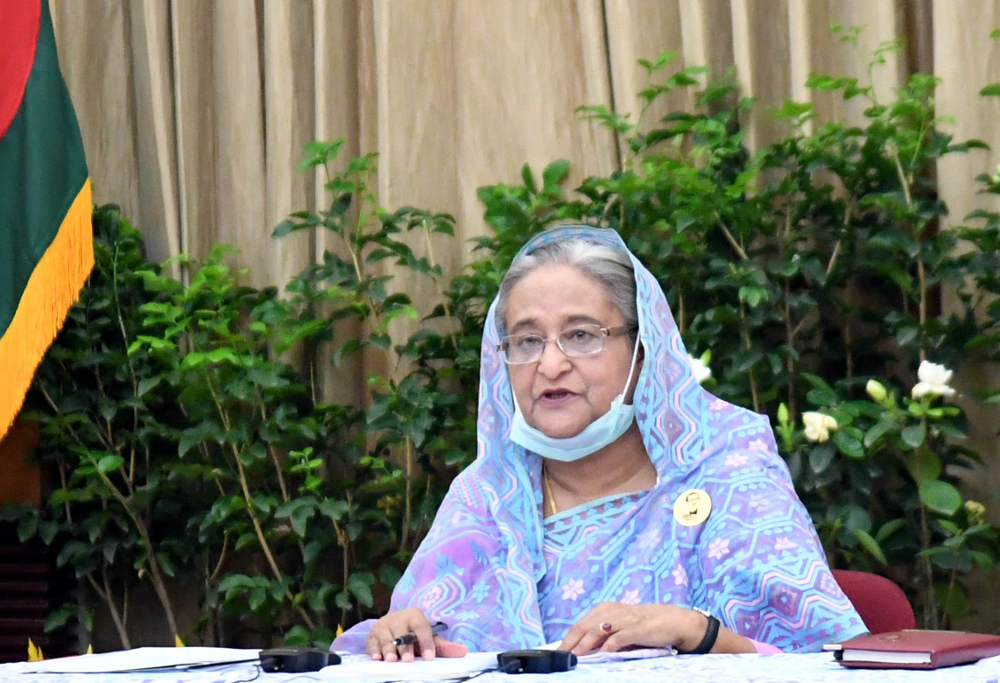 The whopping sum of new measures brings her government’s overall COVID-19 economic stimulus package to $8.5 billion. This includes $590 million in incentives for the garment industry and other export-oriented sectors that the prime minister announced late last month.

“[T]oday I am announcing four fresh financial stimulus packages of Tk 67,750 crore ($7.9 billion),” Hasina said. She noted that the total value of the combined packages equaled about 2.5 percent of Bangladesh’s gross domestic product.

“I hope our economy will rebound, and we could reach near the desired economic growth, if the stimulus packages – the previous and the fresh ones – are quickly implemented,” Hasina said during an online news conference from her official residence that was broadcast live on television.

Among hard-hit industries is the ready-made garment sector, the biggest driver of the country’s export economy that has absorbed billions of dollars in cancelled order from overseas buyers amid the pandemic, trade groups said.

More than 1 million Bangladeshi garment workers have also been laid off or temporarily suspended from their jobs because of factories closing as a result, according to a survey done in late March by the Penn Center for Global Workers’ Rights at Penn State University in the United States.

Hasina unveiled the expanded stimulus program the same day that the health ministry reported the biggest daily increase in COVID-19 cases to date in the country of 165 million people. Authorities confirmed 18 new cases and one new death, bringing the nationwide number of cases to 88 and the death toll to nine.

The stimulus includes a program to assist businesses of all sizes with bank loans, where the government would pay off half of the interest, Hasina said.

Among the measures, the government will provide affected with $3.5 billion as capital through low-interest loans from banks, the state-run BSS news service said. Another $2.3 billion in capital would go toward small- to medium-sized enterprises, including cottage industries, through similar loans.

The stimulus package also includes expanding social safety-net programs to help people living below the poverty line meet their basic necessities, the prime minister said. The government would also distribute free food – particularly to the poor and elderly – and help them buy rice at a subsidized price, she said.

However, it was not immediately clear how much money the government planned to spend on the social outreach component.

“All people would come under this incentive package; none will be left out. Starting from the farmers, all people, all walks of life would get the benefits of this package,” said Finance Minister A.H.M. Mustafa Kamal, who sat at a distance from Hasina during the news conference.

Hasina, Kamal and two other officials who joined them, each had face masks.

BNP: ‘A loan package for businessmen’

Hasina announced the expanded financial measures a day after the main opposition Bangladesh Nationalist Party called for a $10.2 billion stimulus to help the country recover from the pandemic’s economic side-effects.

“There’s nothing for the people of the informal sector, the starving, working ones and the farmers,” he told reporters.

“The fact is that the whole amount is nothing but loans. There’s no grant from the government for the poor and struggling people. It’s a loan package for businessmen. It won’t solve the current crisis,” Alamgir said.

Ahsan H. Mansur, the executive director of the Policy Research Institute of Bangladesh, a private think-tank, deemed the newly unveiled stimulus package as “satisfactory at this stage.”

“The basic aim of this package is to keep the domestic economic activities on track,” he told BenarNews. “I think the package will help absorb the impending economic shocks.”

Mustafizur Rahman, an expert with the Center for Policy Dialogue, gave the package a mixed review.

“The economic package of over $8.5 billion is big, I think. The package seems good, though a huge number of people are apparently left out,” he told BenarNews, referring to at least 10 million Bangladeshis living hand-to-mouth during the COVID-19 crisis.

“If they do not get the benefits under this package, it would aggravate the poverty situation and result in huge economic trouble ahead,” he said.

The country’s social welfare programs are mainly concentrated in rural areas, but such programs don’t exist in the cities, Rahman noted.

“For the urban poor, the government should enhance the program to sell rice, flour and consumer items at subsidized rates,” he said.

“But everything will depend on how long the coronavirus pandemic will continue. Unless the economic activities are restored, we are unlikely to get the benefits of the financial incentive packages.”