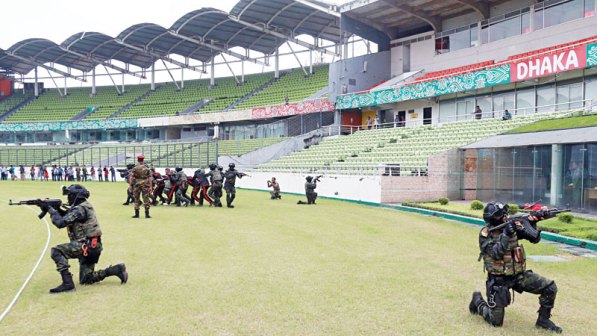 Commandos from the Bangladesh Army, along with other security forces, performed a drill on the August 17 at the Sher-e-Bangla National Cricket Stadium in Dhaka’s Mirpur area amid the Australian cricket team’s tour of Bangladesh.

Ahead of the Test Match Series (ongoing) between Australia and Bangladesh, this drill was conducted not just to assure the Cricket Australia (cricket board) and the International Cricket Council (ICC) on the security of the visiting team in the country, but also to portray the international community that Bangladesh is prepared to tackle any potential threats from the militants, ensuring protection to the foreign citizens in the country.

Although Australia sent their cricket team this month, they previously had, back in 2015, cancelled a tour in Bangladesh fearing security threats. Indeed, since 2013, there have been attacks on many locals and foreigners within Bangladesh. Militant organizations, both local and international, have been continuously claiming responsibilities for these attacks. The government and the law-enforcement agencies attributed these attacks to home-grown militants, and denied any international organization’s link to the attacks.

Many individuals – bloggers, writers, publishers, and academicians – have been killed for allegedly insulting Islam. Also, religious minorities, including Hindus, Christians, Buddhists, and Shites (shias) were killed during the period. The Australia cricket team perhaps cancelled their tour after taking into consideration the abovementioned security situation that had been prevailing in Bangladesh during the period.

Additionally, the English cricket team also thought about cancelling their tour of Bangladesh in 2016 following the Dhaka’s Holey Artisan attack, which was claimed to have been masterminded by ISIS sympathizers in the country. The attack on the night of the July 1, 2016 at Holey Artisan, a Spanish cafe in capital Dhaka’s most secured Diplomatic quarter (Gulshan), reflected the outburst of a new security related reality that had been slowly on rise in Bangladesh from 2013 onwards, as mentioned earlier.

On that night, the scale of attack that Bangladesh experienced was unprecedented and it raised the concern over the country’s security situation to a new height. Immediately after the Holey Artisan attack, which was followed by another attack in the same month in Sholakia close to Bangladesh’s largest Eid congregation, the foreign embassies and businesses became cautious in their operations in Bangladesh and warned their citizens to reduce their movements within the country.

The US Department of State warned its citizens to consider carefully whether to travel to Bangladesh. This was a time when, as mentioned earlier, confusion arose over the English cricket team’s scheduled tour of Bangladesh (2016) amid worsening security environment in the country.

However, Bangladesh authorities have been quick to take control of the security situation and managed to shatter all further attempts made by the militants so far.

Hosting the subsequent (scheduled) international events, summits and conferences – including the Dhaka International Folk Festival in November 2016, the 136th Inter-Parliamentary Union conference in April 2017 and the 4th Asia LPG Summit in February 2017 – portrays the growing confidence on the part of the international community over the improved security environment in Bangladesh subsequent to the Holey Artisan attack.

India’s accord on investments in Bangladesh (during Bangladeshi Prime Minister’s India visit) clearly reflects the neighboring country’s implicit acceptance of a ‘stable, secure and business friendly environment’ in Bangladesh.

Moreover, the tour of the English cricket team in Bangladesh in October 2016 – ending all the confusion that was brewing regarding the tour – stands as further testimony to the country’s recovery of a secured and stable security environment. Bangladesh military conducted a military drill during that tour too and the English team was given the ‘head of state’ style security during their Bangladesh tour.

Since, like the English team, Australia also did not show reluctance this time in coming to Bangladesh, it is apparent that their fear of security threats have largely been reduced due to, perhaps, the Bangladeshi security forces’ post-Holey Artisan activities in their attempt to reduce the potential militant threats within the country.

Bahauddin Foizee is an international affairs analyst & columnist, and specializes on greater Asia-Pacific & Indian Oceanic regional geopolitics. With his articles published in several countries around the world, he, as a columnist, has a regular presence in the leading Dhaka-based newspapers. Besides his area of specialization, he sporadically writes his opinion on European & greater Middle Eastern geopolitics and deteriorating environment and refugee scenario.