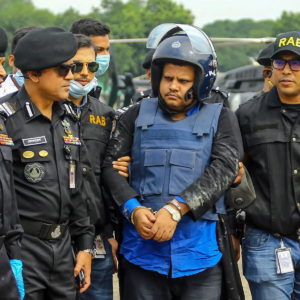 Amidst controversies surrounding the Directorate’s reported inefficiencies, corruption and mishandling of Bangladesh’s fight against Covid-19, Prof Abul Kalam Azad, Director General of Health Services (DGHS) of Government of Bangladesh have finally resigned. One of the key reasons for his resignation, as highlighted by the media, was his alleged complicity in the much-criticized fake COVID-19 test.

Earlier, in a raid against the fake COVID-19 test, Rapid Action Battalion (RAB) arrested one Foysal Al Islam, the Managing Director of Shahabuddin Medical College Hospital. Prior to that and following an intensive manhunt by law enforcement agencies Mr. Shahed Karim, Chairman of one Regent Hospital was also arrested on charges of issuing of fake Covid-19 certificates for a fee.

Yet, in another case, one Ariful Chowdhury and his wife Dr Sabrina Chowdhury, the CEO and Chairman respectively of JKG Healthcare were also taken into custody for a similar reason.

Blatant issuing of fake COVID 19 negative certificates and embezzling money by people like Shahed, Faisal, Ariful and Sabrina, while maintaining strong links with the people of authority have shocked the nation and prompted widespread speculations about the ethical standards of the healthcare sector in Bangladesh.

Good that these criminals have finally been nabbed by the law-enforcement agencies and brought them to justice.

That like everyone else, I am, both shocked and perplexed! I am shocked because anyone could ever engage in such dastardly acts and perplexed thinking how low people stoop these days to make money by putting people in danger. All these have been possible because of serious lapses in the country’s healthcare governance. .

The entire healthcare system of the country has long been in shambles and allegations of corruption have been both rife and rampant. It is thus of little surprise that it got mired in the business of faking of COVID 19 test results, that are nothing but third-degree crimes.

In the past, there were allegations against many established private hospitals including Labaid and United about their shadowy business practices. Many clinics in the country have also been engaged in several illegal or unacceptable business practices. Among these, issuing false medical certificates (for injuries, deaths, vaccinations, sick leaves etc) are known to be long-standing practices, actively pursued by many dishonest physicians and clinics.

Public hospitals are not immune to such malpractices either. The issuance of false Corona certificates, therefore, looks like a mere extension of the existing widespread malaise that infected the healthcare industry in the country for quite some time now. It is just that people would still engage in such heinous malpractices even during these dire days of deadly COVID-19 pandemic which claiming scores of lives every day, is utterly shocking!

However, the good news is that COVID-19 has unraveled everything that is wrong with the health sector of Bangladesh, more openly, if not starkly revealing that things are much uglier than one ever thought it to be.

Medical procurement and expenditure in public health systems have always been a huge source of corruption. In this regard, the recent scandals surrounding the supplies of PPEs, masks, test kits, ventilators, oxygen cylinders, and other medical necessities are but few of several such corrupt practices which included among other things in huge mark-ups in costs of procurement of food and accommodation in public hospitals. Recent news about alleged bungle of Tk 20 crore for procuring accommodation, food, and transportation of Dhaka Medical College Hospital health workers treating Covid-19 patients has been so atrocious that it attracted the attention of the Prime Minister who has since ordered a thorough investigation into the matter.

Another new trend, especially with regard to COVID 19, is that many clinics and hospitals, both public and private, have been demonstrating insensitive and in the digression of medical ethics showing reluctance to admit or treat coronavirus patients and things came to such a level that the High Court had to intervene and directed the government – the Secretary, Ministry of Health – to investigate these allegations and ensure that all hospitals – both private and public – are made available to all coronavirus patients.

Bangladesh’s medical system’s dip into dishonesty did not happen in one day nor is this the work of handful. A deeply entrenched nexus of profiteering vested interest made up of government and private businesses is responsible for the quagmire of corruption the system is stuck. The nexus consists of private clinics and government agencies including hospitals; dishonest medical practitioners, pharmaceutical companies, pathology labs, and pharmacy owners, etc. etc. It works like a mafia. Furthermore and sadly, even the relevant professional associations have also become complicit in and accessories to these organized crimes.

Let us hope that the government acts decisively, punishes the perpetrators of the frauds and more importantly, overhauls entire healthcare system, provides quality leadership and break this unholy nexus that has crippled entire health system for if it does not, with the COVID-19 situation worsening, people’s confidence sinking and the economy collapsing, future is anything but pretty!

Dr Sharif As-Saber is a former bureaucrat. He is the President of GAIN International and currently working as a senior academic at RMIT University, Australia.