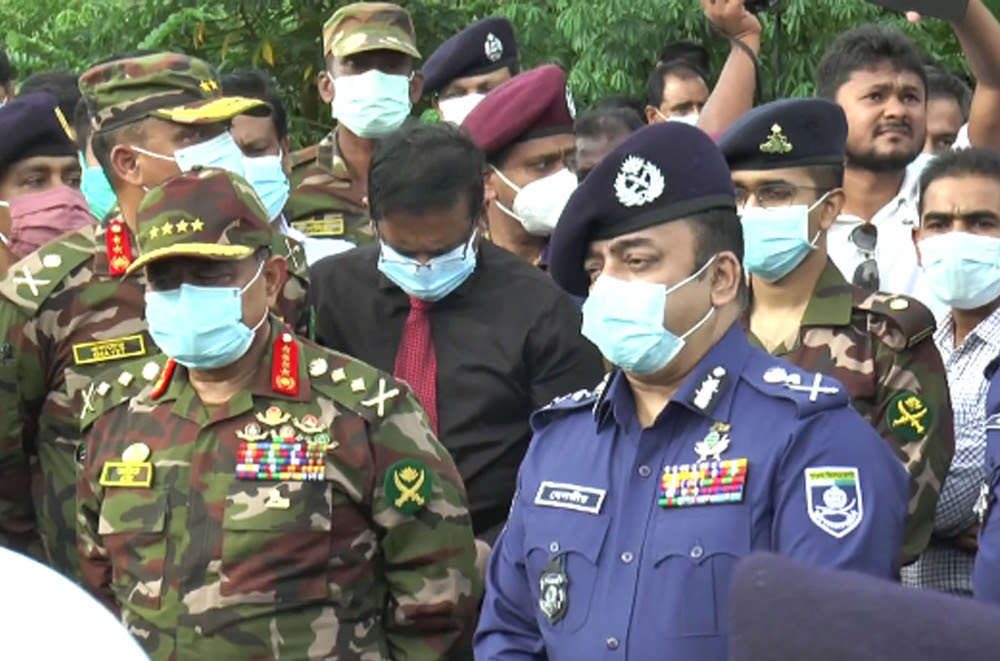 At an unprecedented joint news conference Wednesday, the chiefs of Bangladesh’s army and police sought to allay concerns about a rift between their organizations after policemen last week shot dead a retired army officer who was a former member of the prime minister’s security detail.

Army Chief Gen. Aziz Ahmed and Inspector General of Police (IGP) Benazir Ahmed told reporters that both sides would work to determine if charges should be brought in the July 31 killing of Maj. Sinha Md. Rashed Khan at a police checkpoint in southeastern Cox’s Bazar district – a case that has grabbed headlines in Bangladesh.

“The trust between the army and the police forces built over the years will remain undamaged,” Aziz Ahmed told reporters gathered at an Army bungalow in Cox’s Bazar.

The army and police chiefs spoke together after Prime Minister Sheikh Hasina telephoned Khan’s mother a day earlier and assured her that justice would be served.

“The Bangladesh Army is shocked at the death of retired Maj. Khan and police are also shocked,” the army chief said, describing the killing as an isolated incident. “Those identified as the perpetrators must pay the price.”

Aziz Ahmed said the army and police had followed Hasina’s instructions and established a joint investigation committee. It began its work on Tuesday and was given seven days to present its findings.

Officials from the police and military often work together on task forces, and the Rapid Action Battalion (RAB), an elite security force, is made up of police and army personnel. But Wednesday’s press conference marked the first time that the chiefs of the army and national police had addressed reporters together.

The ex-leader of a Bangladeshi human rights organization noted that the event was unusual.

“Holding a joint press conference involving the army and police chiefs is a rare incident in Bangladesh. They attended because there was confusion and unrest among the army, police and citizens,” Nur Khan, a former executive director of the rights body Ain-O-Shalish Kendra, told BenarNews. “This press conference is an apparent end to that.”

“So far as I can remember, there is no previous example of a joint press conference by the army and police chiefs,” he added.

Last Saturday, the Inter-Services Public Relations Directorate (ISPR), a news agency of the armed forces, issued a statement on the killing.

It said Khan, who was wearing combat fatigues, went to Cox’s Bazar to film scenes for a YouTube video. Around 9 p.m., police stopped his car at a checkpoint and he identified himself.

ISPR said a police sub-inspector identified as Mohammad Liaqat Ali stopped Khan’s car a second time and pointed a pistol at him.

“As soon as Maj. Sinha (Khan) got out from the car with his hands up, SI Liaqat shot three rounds,” the statement said, adding that the police officer had not asked Khan to identify himself.

“Shooting instead of arresting a person with his hands up is unlawful,” the statement said.

Masud Hossain, the superintendent of police in Cox’s Bazar, told reporters on Aug. 1 that police shot Khan because he had pointed his own gun at the officers.

“The police shot at him in self-defense,” he said, adding that officers were on high alert because of threats of militant attacks. He also said police recovered drugs and alcohol from Khan’s car.

Refugee camps in an around Cox’s Bazar are home to about 1 million Rohingya who fled from Rakhine state, located just across the border in neighboring Myanmar. Bangladeshi government officials have justified security measures in the border region, claiming they were implemented to guard against militant attacks.

In addition to holding the press conference, the two chiefs traveled on Wednesday to the police checkpoint where Khan was killed.

“We also see the incident as an isolated one,” said Benazir Ahmed, the nation’s police chief. “Our aim is to ensure that the probe committee works without any undue influence.”

He said he was concerned about comments circulating on social media and elsewhere that the police and the army were not working together on this case.

“Simply put, the army chief and the police chief shrugged off the institutional liability involved in the shooting to death of Maj. Khan and attributed it to SI Liaqat, Teknaf police station officer-in-charge Pradeep Kumar Das and other police personnel,” he said. “But I think police as an institution cannot shrug off the liability.”

Home Minister Asaduzzaman Khan Kamal told BenarNews that Das had been removed from his duties at Teknaf.

Her lawyer Md. Mostofa told BenarNews that Liaqat Ali, Das and seven other police personnel were accused in the case.

“We appealed to the court to accept our petition to authorize RAB to investigate, and the court has granted our petition,” Ferdous told BenarNews.

CLARIFICATION: This report was updated to add a comment and information about the unprecedented news conference.