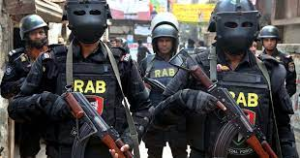 “RAB deserved to be sanctioned years ago because it has been a de facto death squad, operating with impunity for years in Bangladesh.”– Phil Robertson, Human Right Watch (HRW)

The Biden Administration has slapped sanctions against a few ranking members of the Bangladesh Rapid Action Battalion (RAB) on December 10, 2021, for their involvement in serious human rights violations in the country. The action coincided with International Human Rights Day. The US also barred the entry of the former army chief General Aziz Ahmed, who, along with Prime Minister Sheikh Hasina, was implicated in high-level corruption in an Al-Jazeera report in early 2021.

The US-based Coalition for Human Rights and Democracy in Bangladesh (CHRD Bangladesh) has been pursuing the US authorities for action against the perpetrators of violations in human rights, democracy, and corruptive practices in Bangladesh. Following a virtual seminar among members on December 18, 2021, the CHRD Bangladesh thanked the Biden Administration for the sanctions, which many thought to be too little too late compared to the degree and timespan of violations. It further requested Washington to widen the punitive net to include the big fishes in the command chain.

A day earlier, on December 19, 2021, the CHRD Bangladesh also issued a statement welcoming the US actions. (Please see, Human Rights Groups Greatly Appreciate The US Sanctions On RAB | ChrdBangladesh). The statement quoted Phil Robertson of the Human Rights Watch (HRW), who said on the US sanction, “RAB deserved to be sanctioned years ago because it has been a de facto death squad, operating with impunity for years in Bangladesh.”

The HRW also gave a sample of RAB crimes committed between 2009 and September 2021, as reported by Odhikar, a Bangladeshi rights organization. According to Odhikar, RAB extrajudicially killed at least 1,255 people and was a major perpetrator of the enforced disappearance of more than 600 people, most of whom were either found dead or still missing.

Similar restrictive actions were also imposed on officials of China, North Korea, and Myanmar, all of which are perennially at odds with the US, mostly on moral grounds. Bracketing Bangladesh with the group generated some speculation among analysts. Professor Taj Hashmi (formerly of the APCSS, Honolulu), thinks it is China. To me, China is a distant consideration. Dhaka’s decades-old deep economic and military ties with Beijing are not unknown to Washington. Bangladesh deserved the punitive action long ago, as expressed by Phil Robertson of the Asian Chapter of the HRW.

The US joined the India-led clique that helped oust Bangladesh’s constitutional government in January 2007, and two years later, it installed Sheikh Hasina as the Prime Minister. The Awami League leader, who is otherwise thought as “illegal” because of her fraudulent subsequent election victories that are acknowledged by the whole world including the US. She remains extremely unpopular in the country. With a view to preventing the people from speaking against her, her family, or her government, she enacted a number of draconian laws. Hundreds, including journalists, have been suffering under the law, some even succumbing to the RAB-Police torture. It is believed that the detested woman not only survives but runs absolute fascism with the direct patronage of New Delhi. And, her Chanokya Dadas, invoking the China card, perhaps convinced Uncle Sam to ignore–if not be content–with their hegemonic control of Bangladesh.

President Joe Biden came with a foreign policy promise to fix, among others, human rights, authoritarianism, election security, and corruption. Hasina’s Bangladesh miserably failed in all these fundamental parameters. The State Department’s Annual Country Reports recorded her failings. Local and international rights, democracy, and financial watchdogs kept warning about the gross human rights violations and the ongoing fascist practices in Bangladesh. In May 2020, a congressional committee pushed for the sanction against the RAB. Amnesty International in its 2020 report says: “The Government of Bangladesh is responsible for multiple human right violations, including unlawful killing and disappearances, arbitrary arrest and detention, and torture.” As such, the US action was not a bolt from the blue.

While this is the right step in keeping with the agenda of President Biden in his foreign policy objectives, the CHRD Bangladesh and most other human rights and democracy organizations feel it is too little. The persons identified are definitely in the loop of the vicious circle that routinely perpetrate abuses, but they form the tip of the iceberg. They did not act alone; nor do they now. They are part of the command channel that starts from the top, the Prime Minister. In electronic media parlance, “Mother of Mafia” has become a popular term to describe the Bangladesh Prime Minister.

In February 2021, the Qatar-based Al Jazeera made an investigative report on the criminal and corruption activities of Sheikh Hasina and her army chief General Aziz Ahmed. Titled “All the Prime Minister’s Men”, the first installment of the report can be seen in these links:

Most right groups think that for the US actions to be fully effective and deterrent, people in the chain of command also need to be taken to task. If the command channel is left untouched, its viciousness is expected not only to continue but also to grow in vengeance. The nation and the people will continue to suffer from increased intensity. This limited, small-scale action may even lead to further suffering to the people, rendering the US action counterproductive. As such, it is imperative that the scope of the sanctions be widened to root out the source and the entire paraphernalia in the chain of crime.

The writer is a human rights activist and authored a few books. He regularly writes on the contemporary issues concerning Bangladesh