Bangladesh – Stifling opposition at all costs 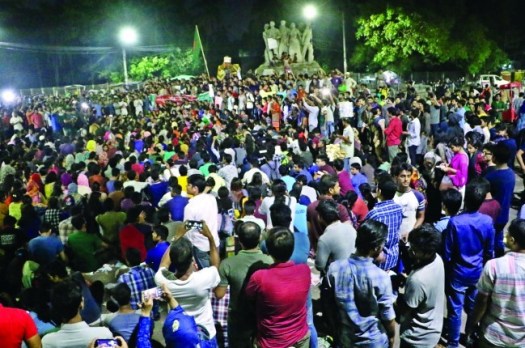 Human rights groups in Bangladesh have been issuing reports after reports about the state-sponsored abductions and crossfire killings to muzzle dissent. Currently, university students nationwide have come out in droves to protest the government’s quota system into the civil servant jobs wherein 54% of these lucrative jobs are reserved for certain quotas. Majority of the quota was for the children and grandchildren of the freedom fighters from 1971 liberation war followed by women and minorities. A small percentage was merit-based which has led to widespread corruption in the entrance to these critical positions.

There are serious allegations against the present government about easier entry into these jobs by the party loyalists who pretend to be children or grandchildren of the freedom fighters. The university students who worked hard for these jobs are kept aside in an unfair system that allows personal loyalty to the party of the government. The students demanded a smaller quota allocated for the genuine aspirants and not at this lopsided scale.

The system has created a civil service that often gets partisan and sides well with the ruling Awami League. This entrance examination opens the door to senior positions in the judiciary, police, armed services, government-owned enterprises like banks and industries including a wide array of critical government jobs. Bangladesh is still a government-centric economy, and these jobs play a huge role in the steering of the country.

The Dhaka University area turned into a battlefield early Monday as students and jobseekers locked into clashes with law enforcers and ruling Awami League-backed BCL leaders and activists during their demonstration to realize their demands for reform of the existing quota system in civil service.

At one stage, a group of people broke the main gate of Dhaka University Vice-Chancellor Mohammad Akhteruzzaman’s residence and vandalized furniture and other belongings, and also torched three cars inside the compound. The agitating students stated these were not their actions. They asked the authorities to run a fair investigation by checking the CCTV footage in and around the residence. 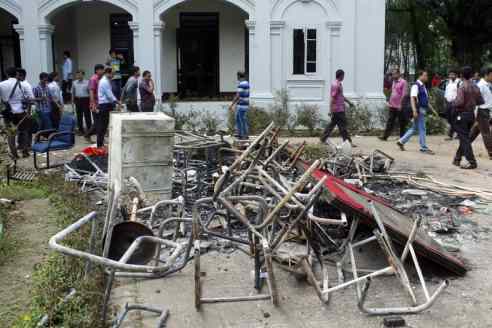 Credit: UNB. The VC claimed that the attackers are not DU students but outsiders. “The attack was not carried out by the quota protesters. Masked attackers were trained and they came to kill me,”

“While the students were demonstrating at Shahbag area, a thousand people entered the Dhaka University campus through Nilkhet crossing, carrying machetes and axes,” an eyewitness stated. It is widely suspected that the government led Student League was part of the hardcore violence and the attack on the VC’s house; all to discredit the genuine movement that is raging and propagating nationwide throughout most government and private universities.

The opposition BNP on Tuesday alleged that ‘government agents’ attacked the residence of Dhaka University Vice Chancellor (VC) to divert the general students’ quota-reform movement to a different direction. 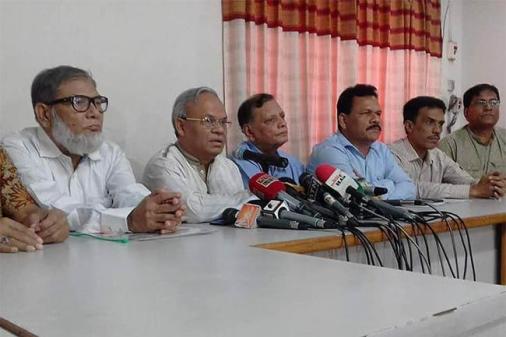 “General students said they didn’t attack the VC’s residence. The Dhaka University campus has long been under the grip of Chhatra League cadres. No one, except them, can dare indulge in attack and vandalism there,” said BNP senior joint secretary general Ruhul Kabir Rizvi.

Speaking at a press conference at BNP’s Nayapaltan central office, he further said, “The attack is planned and mysterious one. All believe the government agents launched the attack on the VC’s residence to divert the general students’ movement to a different direction.” The Home Minister in the meantime is steering the investigation in a direction that suits his party’s goal. All evidence is being adjusted to frame a case against the opposition parties.

The BNP leader said though the students and job seekers have long been in a movement for reform of the existing quota system in civil service, the government has been ignoring it.

A five-member probe committee was formed by the Dhaka University authorities yesterday to investigate the attack on the residence of the DU vice-chancellor as various quarters made claims and counter-claims over the incident. Visiting the spot yesterday, Awami League General Secretary Obaidul Quader termed the attack pre-planned and warned that no one involved in the attack would be spared. Home Minister Asaduzzaman Khan told reporters that certain political parties were suspected to be behind the vandalism at the DU VC’s residence. 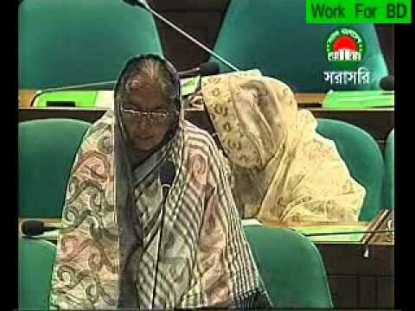 Students demonstrating for reformation to the quota system in public services at Jahangirnagar University (JU) yesterday gave a three-day ultimatum for Agriculture Minister Matia Chowdhury to retract an inflammatory remark she had made in parliament on Monday.

Matia had bashed the demonstrators demanding quota system reform, saying: “… the Liberation War is still ongoing. We will take care of these children of Razakars. We have nothing against students, but opportunists, Jamaat-Shibir, and their agents will be dealt with strictly.”

The student leaders said: “Calling the demonstrators ‘children of Razakars’ was insulting to the spirit of the Liberation War, as our movement upholds its values. If she does not apologize within three days, she will no longer be allowed on JU premises.”

Independent MP Rustam Ali Farazi on Monday had brought up the quota reform protest on a point of order in the parliament, following which several ministers and MPs for the government spoke on the matter.

Matia Chowdhury, also a presidium member of the ruling Awami League, in an unscheduled discussion at parliament on Monday, said “Will the children and successors of those who risked their lives to fight for independence not get an opportunity? Will the children of Razakars get the chance?

Will the quota for the freedom fighters be shrunk for them?”

A faction of the quota reform movement of Dhaka University demanded an apology from the minister for her remarks.

“We are the children of Bangabandhu, not Rajakars and we have no faith in the government that gives assurances and then labels us Rajakars,” Syed Zobaer Uddin, a representative of the protesters, also a master’s student of Dhaka University, said in front of the Raju Sculpture.

The government masks its thuggery by spinning an alternative narrative in most cases like this. That Bangladesh is a democratic country, a bastion of empowerment. One of the great tragedies of Bangladesh’s descent into autocracy is the insipid response of the international community. The deteriorating human rights situation in Bangladesh, It is clear that chaos flourishes where there is a culture of intolerance and impunity, or where space for democratic challenge and debate is lacking.