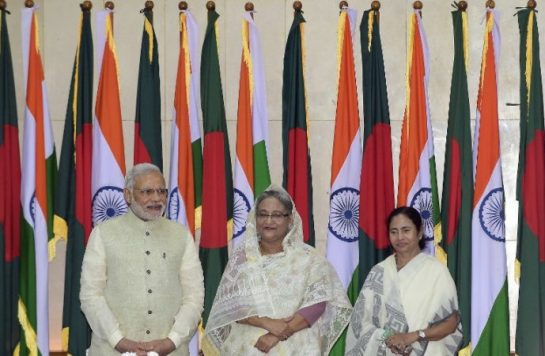 It has become usual pattern for any political interaction between Bangladesh and India at the highest political level to be preceded, and followed, by an endless stream of analysis and curiosity on both sides of the border, but more so in Bangladesh. The just concluded official visit of Bangladesh Prime Minister Sheikh Hasina to India from 7 to 10 April has been no exception, nor was it expected to be.

That the bilateral ties between the two South Asian neighbours have been on an upward curve is beyond denial. This is manifest in the fact that between 2010 and now there has been four exchanges of visits at the level of heads of government. Each has been laced with cordiality, warmth and fond utterances for each other. Lengthy joint statements cataloguing what has been achieved and a clear declaration of intent on the way forward have followed each visit. It is not surprising, therefore, that this relationship, rooted as it is in history and conditioned by geography, finds its rightful place at the top of the foreign policy agenda in Bangladesh and a priority one in India.

This time the visit kicked off with a bang when Indian Prime Minister Narendra Modi, in a clear break from standard protocol practices, chose to personally receive his Bangladesh counterpart at the airport. The gesture helped create the right chemistry between the two leaders and set the tone for what would follow over the next four days, and even beyond. The optics that followed were good and incidents of culinary meddling added to the flavour and gave a helpful personal touch.

The two major issues that drew most attention in the build-up to the visit were a possible defence related deal and whether there would be any forward movement on the thorny question of sharing of the waters of common rivers with special focus on Teesta. While the first was signed, sealed and delivered, the second was again marked off as work in progress, albeit progress at a glacial pace. The significant difference this time was a public pronouncement by Prime Minister Modi that a solution to this matter would be found during the tenures of the respective governments in Dhaka and Delhi. This commitment was, however, somewhat watered down in the Joint Statement issued following the official talks.

The Teesta issue featured more prominently in the public discourse, keeping in mind that an interim deal was on the verge of being penned during then Prime Minister Dr. Manmohan Singh’s visit to Dhaka in 2011 before West Bengal Chief Minister Ms. Mamata Banerjee scuttled it by refusing to go along. Dr. Singh was embarrassed enough to publicly apologize to the people of Bangladesh for this unforeseen and unfortunate turn of events.

Hoping for something more positive this time, Indian President Pranab Mukherjee, a genuine friend of Bangladesh, and Prime Minister Modi invited Chief Minister Banerjee to Delhi to time with the presence of the Bangladesh Prime Minister. The outcome was not, however, much different: Ms. Banerjee played hardball once again and refused to shift from her earlier obstinacy. Not just that, after a lengthy meeting with Prime Minister Sheikh Hasina at Rashtrapathi Bhavan, where the Bangladeshi leader was lodged, Ms. Banerjee sprung a surprise by offering an alternative solution, suggesting that water from four other rivers in West Bengal be diverted to Bangladesh on the grounds that there was not enough water in Teesta to share. The redeeming feature here is that officials in India, and sections of the media, were quick to dismiss this proposal because of its sheer absurdity. Subsequently, Bangladesh officials also rejected it, stating that Dhaka would count on the pledge made at the highest level from India.

While the West Bengal Chief Minister’s concerns for her constituents is understood, the sustained forward movement of Bangladesh-India relations in all fields should not be held hostage to those concerns. Delhi sincerely understands that, and Dhaka believes it. During his official visit to Dhaka in 2015, Prime Minister Modi commented that “rivers should nurture the India-Bangladesh relationship and not become the source of discord”. He went a step further this time by publicly committing his government to a deal sooner rather than later. Initial steps on this are already underway in India. This is heartening and needs nurturing. However, not even a reference to the Joint River Commission, JRC, which was launched as early as 1972 specifically for this purpose, was a surprise as was the absence of a firmer pledge to cut down to zero the killing of Bangladeshis at the border.

A significant event during this visit was the belated formal recognition from Bangladesh of the supreme sacrifices made by members of the Indian Armed Forces during its Liberation War in 1971. At the event, held at the Manekshaw Centre in Delhi, Prime Minister Sheikh Hasina, in the presence of her Indian counterpart, honoured seven of the Indian heroes who had laid down their lives for Bangladesh’s independence. The occasion was as much poignantly sombre as it was emotionally charged. Even here, Teesta found mention. The symbolism of the reference to Teesta as one of Bangladesh’s lifelines by Master of Ceremony retired Colonel Sajjad Zahir, a decorated Bangladeshi freedom fighter, was not lost on the audience, both those on the stage and those off it.

On balance, the outcome of this visit weighed more on the side of optimism than otherwise. More than 20 deals of varying shapes and covering a wide range of issues were signed following the official talks. India also offered to sell an additional 6o megawatt of electricity to Bangladesh and connectivity was boosted with new rail and road connections. A credit line of USD 4.5 billion from India was signed to cover costs related to multifarious projects, boosting Indian investments in Bangladesh, and cooperation on peaceful nuclear technology and in outer space. Furthering the ongoing cooperation on combatting trans-boundary terrorism and violent extremism was also agreed. The much talked about defence deal materialised with the signing of two major documents, one a framework Memorandum of Understanding (MoU) and the other a USD 500 million line of credit for the Bangladesh military. In form and content, the framework MoU is not much different from the ones Bangladesh has with others. In any case, defence cooperation between the two militaries has been on a constant rise in recent times. The deal provided a framework for institutionalising these links.

The author is a decorated freedom fighter and a former Foreign Secretary of Bangladesh.