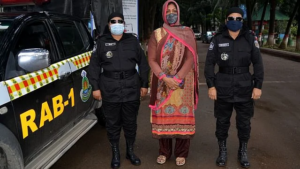 The violation of human rights by the fascist regime of Sheikh Hasina in Bangladesh reached a new and ugly height. As the regime cannot reach the political dissidents living abroad, it goes for their innocent relatives in the country. Harassment, arrest, torture and jail terms for the victims are in the routine works of its fearsome Rapid Action Battalion (RAB) and police. Fake charges under the draconian Digital Security Act (DSA) are instantly stamped. A few had already succumbed to the police brutalities. The vast majority is forced to remain silent for fear of their lives.

The latest victims are Nusrat Shahreen Raka, a housewife, and her three underage children. They were picked up on October 6, 2021 from their Dhaka residence. She is presently under interrogation, otherwise known as “torture” in Bangladesh parlance. Their crime? Ms. Shahreen Raka is the sister of dissident journalist Dr. Kanak Sarwar who runs a very popular TV channel in New York in which prominent Bangladesh origin personalities often give their views exposing the various wrongdoings, corruptions and illegal activities of the fascist regime back home.

Most Bangladeshis term Sheikh Hasina as the “illegal Prime Minister” because she has been holding the position, with Indian orchestration, by enforcing fraudulent elections since 2008. (On September 25, 2021, the Prime Minister virtually admitted it in a muted online rejoinder in New York). In exchange, India reaps almost free geo-political and economic benefits out of Bangladesh.

The Coalition for Human Rights and Democracy in Bangladesh (CHRD Bangladesh), a non-profit NGO based in the US, immediately posted a protest statement in its website as under:  http://chrdbangladesh.org/2021/10/06/chrd-bangladeshs-statement-against-the-persecution-of-a-family-member-of-dissident-journalist-dr-kanak-sarwar/

The Statement gives additional details about the arrest of Ms. Shahreen and her brother Dr. Sarwar.

Even small boys are not spared of police brutality

The Reporters Sans Frontier (RSF) named Sheikh Hasina as one of the 37 world leaders who buried press freedom in their countries. More than 2500 journalists were arrested and 15 of them died in custody. The Digital Security Act 2018 saw the arrest of some 200 persons so far for criticizing the regime and its leaders, a few of them succumbing to torture. Even a small parody line on Hasina or her father Mujib was good enough to fetch months or years of torturous jail terms. The Odhikar, a Bangladesh Rights Watch Agency, and other international rights organizations reported that between 2009 and 2020, Sheikh Hasina’s fascism committed 2,537 extrajudicial killings. They included about 2350 by direct shots and 180 by torture. About 800 people died in jails, suspected to be from torture. More than 600 persons disappeared and are still missing. The political violence that surpassed all previous records, took the lives of 2,221 people and severely injured 127,257. Public lynching and gang-rapes were common, in which most perpetrators belonged to the ruling coterie.

During an Awami League press briefing In New York on September 22, 2021, a journalist of NCN, a US TV network, was brutalized by the regime’s local and imported thugs because he questioned the utility of Sheikh Hasina’s extravaganza in the two-week long, 141-member trip to the United Nations. More can be read from the following report:

That the Hasina regime is bent on destroying the opposition politics in the country can be visualized from the report of Mirza Fakhrul Islam Alamgir, Secretary General of the Bangladesh Nationalist Party (BNP) at its Council Meeting in 2016.  Mirza Alamgir presented a harrowing report of repression meted out by the regime on the mainstream opposition party. The report said, “In the last few years, 502 leaders and workers of the party (BNP) were killed by government repression, and by the firing of the police and the terrorist death squads of the ruling party. During this time, 223 leaders and workers have been abducted, 4000 have been seriously wounded, about 75,000 were thrown to prison, about 24,000 court cases were filed, in which 430,00 were accused. In these false court cases, 50 people have been given life imprisonment.”

The statement covered only a few years until 2016. Thirteen years down the lane–from January 2009 to the present time–the picture is far grimmer and dismal. In real terms, there is no opposition politics in the country today. The “illegal” regime continues to score its fascist goals–rights violations, killings, abductions, arrests, torture and all other anti-democratic practices and self-serving propaganda– in an empty field, unchallenged.

The CHRD Bangladesh made an urgent appeal to the administration of President Joe Biden, who repeatedly assured human rights, democracy, election security and anti-authoritarianism, among others, to be the cornerstones of his foreign policy objectives, for an urgent intervention against repeated gross human rights and democracy violations in Bangladesh.

Writer is a democracy and human rights activist. Authored a few books.