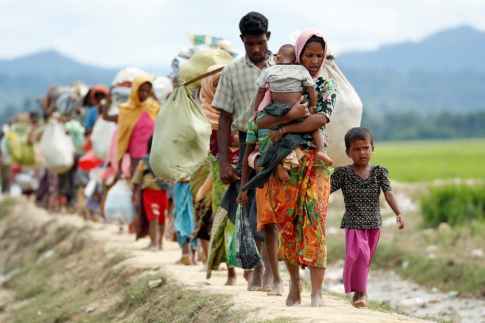 Bangladesh and Myanmar have struck a deal for the involuntary repatriation of over 2,000 Rohingya refugees. But the agreement is rushed and threatens stability on both sides of the border. Myanmar and Bangladesh should halt the plan and instead work to create conditions conducive to a safe and dignified return.

What’s new? Bangladesh’s government is preparing to return several thousand Rohingya refugees to Myanmar. Under pressure from China, the two countries have agreed to start implementing a repatriation agreement on 15 November 2018.

What should be done? The UN, U.S., European Union (EU), Australia, Canada and other governments should press Bangladesh and Myanmar to postpone repatriation until conditions on the ground in Myanmar allow Rohingya refugees to return safely and voluntarily.

Bangladesh is poised to begin returning several thousand Rohingya refugees to Myanmar. This repatriation is unlikely to be voluntary and should not proceed. It would not only violate Bangladesh’s international legal obligations and jeopardise the safety of the refugees, but risks triggering violence and greater instability on both sides of the border. Bangladesh and Myanmar should immediately halt the plan. The UN, including the secretary-general’s special envoy and the UN refugee agency, should continue to firmly oppose it, both in public and in private, and establish a process whereby Rohingya refugees are consulted about their future. The U.S., European Union (EU), Australia, Canada and others also should press Bangladesh and Myanmar to halt the returns and instead work to create conditions conducive to voluntary repatriation; those countries’ participation at the 11-15 November ASEAN summits in Singapore is an opportunity to do so.

The refugees have been living in vast camps near the Bangladesh-Myanmar border ever since. A UN fact-finding mission concluded that the military’s actions constitute crimes against humanity, war crimes and possible genocide.

Myanmar and Bangladesh agreed to a procedural framework for repatriation in November 2017, which was supposed to start on 23 January. But no Rohingya refugee has returned through official channels. In fact, more Rohingya have left Myanmar since then: some 16,000 have departed Rakhine state for Bangladesh so far in 2018.

Refugees are unwilling to return without guarantees that their security and rights will be protected, accountability ensured and compensation provided for the destruction of their villages, homes and property.

On 30 October, however, Bangladesh and Myanmar agreed on a repatriation deal at a joint working group meeting in Dhaka. Under the agreement, 485 Rohingya families (a total of 2,260 people) are to be returned to Myanmar starting on 15 November; Myanmar has said that it will process 150 returnees per day.  These people were not consulted in advance and how they were selected is unclear; they are terrified at the prospect of being returned to Myanmar.  The Bangladesh authorities have said that they will not force people to go back, but no return under present circumstances can be voluntary. Crisis Group interviews indicate that some of the refugees on the list for return have gone into hiding out of fear of being repatriated; at least one has attempted suicide.

Some of the refugees on the list for return have gone into hiding out of fear of being repatriated; at least one has attempted suicide.

While the two countries have held many previous discussions and made announcements on repatriation plans over the past year that have not been implemented, this time Bangladesh appears determined to push through a limited returns process. Its political calculations have shifted for two key reasons.

First, it has come under considerable diplomatic pressure from China to start returns. China has important economic and geostrategic interests in Myanmar, including a multi-billion dollar China-Myanmar Economic Corridor, the details of which are currently being finalised; it is also a major investor in Bangladesh, giving it significant leverage. China has been supporting Myanmar in the UN Human Rights Council and General Assembly and protecting it from stronger Security Council action. It has advocated support for Myanmar and Bangladesh to deal with the situation bilaterally instead of being addressed in multilateral forums, but this argument rings hollow if the bilateral process is not working.

Beijing has thus facilitated a series of meetings between Myanmar and Bangladesh and has made clear that it wants to see movement. Chinese Foreign Minister Wang Yi hosted a side meeting among Myanmar, Bangladesh and UN Secretary-General António Guterres and his Special Envoy during the General Assembly in September, where the Bangladesh foreign minister committed to start repatriations “soon”.

Secondly, Bangladesh is worried about what it sees as an emerging global consensus that most refugees are unlikely to return home for the foreseeable future and a shift in Western donor focus to their local integration. Many senior Bangladeshi officials privately acknowledge that the majority of refugees may never go home.

But they are not ready to state this publicly or to allow donors to take for granted Bangladesh’s continued hosting of the Rohingya – especially given the low levels of funding for the humanitarian operation and the burden this places on Bangladesh. It also believes that international actors have not pressed Myanmar enough to address the security, rights and accountability issues to enable any large-scale return.By undertaking some forced returns, Bangladesh officials appear to be banking on the fact that they will alarm donors and prompt them to focus more on the situation and realise the status quo is unsustainable.

These factors have combined to tip Bangladesh’s policy in favour of a small-scale return. Political dynamics ahead of general elections in Bangladesh on 23 December may also play a part. Myanmar also sees a limited repatriation as serving its interests. Naypyitaw hopes that a small number of returns would demonstrate to a sceptical world that it is ready to welcome Rohingya back, shifting the focus away from the reasons why they originally left – and thereby weakening, it believes, the basis for claims of ethnic cleansing and genocide.

III. The Risks of Forced Returns

While Bangladesh and Myanmar may consider that the return of some refugees serves their respective interests, it would harm the Rohingya themselves, who would be returning to a situation from which people continue to flee. Bangladesh is not a signatory to the 1951 Refugee Convention or its 1967 Protocol, and while it has given the Rohingya safe haven, it does not formally recognise them as refugees. Nevertheless, Bangladesh has an obligation under customary international law to ensure that any return of refugees to Myanmar is voluntary and safe.

Bangladesh and Myanmar did not consult in advance with the UN or its refugee agency on the repatriation. The UN has stressed the move is premature and that it does not yet consider conditions on the ground in Rakhine state conducive to returns.

The UN special rapporteur on the situation of Human Rights in Myanmar issued a statement on 6 November calling on Bangladesh to shelve the “rushed plans” for repatriation.

In addition to the human rights concerns, a forced repatriation carries serious risks for security and stability on both sides of the border. The refugee community in Bangladesh is strongly opposed to the move and will do whatever it can to resist it. This will increase tensions in the camps and could lead to confrontations between refugees and Bangladeshi security forces and greatly complicate humanitarian operations. A botched repatriation attempt could potentially set back peace and development efforts by years.

The ARSA militant group continues to have a prominent presence in the camps and could launch cross-border raids on Myanmar’s security forces, as it did in January 2018, in an effort to stop repatriation. Other militant factions have also been organising in the camps, though their capacity for violent action is unclear. Any attack or other security incident in Rakhine state would heighten tensions there and could worsen conditions for the several hundred thousand Rohingya who remain. Myanmar has also said that some of the people proposed by Bangladesh for repatriation were ARSA members.

It is not known if they are among those selected for return but this raises the worrying possibility that some of those sent back could be arrested.

In addition to the human rights concerns, a forced repatriation carries serious risks for security and stability on both sides of the border.

A rushed repatriation is also likely to increase tensions in Rakhine state. Already, ethnic Rakhine opposed to returns have held demonstrations to stop them. Rakhine nationalists are also calling for strict security vetting of returnees and resettling them to certain secure areas instead of their home villages. In particular, nationalists are staunchly opposed to any returns to southern Maungdaw, which they want to maintain as a “Muslim-free zone”.

Crisis Group has seen a partial list of the returnees, a number of whom came from villages in this area, and under the terms of the repatriation agreement should be allowed to return there. A secretive repatriation process without the consultations and preparations needed in Rakhine state could easily inflame hostilities and provoke violence against returnees or the remaining Rohingya population.

If refugees fear that they will be forced back to Myanmar, they may become more desperate to leave the camps and to attempt dangerous sea journeys across the Bay of Bengal to Thailand, Malaysia, Indonesia or other countries. This could have wider regional implications, as it did during the maritime migration crisis of 2015.

The following actions should urgently be taken:

As dialogue partners with the Association of Southeast Asian Nations (ASEAN), the U.S., EU, Australia, Canada and others should use the upcoming ASEAN summit meetings from 11 to 15 November in Singapore to press Myanmar to halt its current plans and instead work to create conditions for voluntary repatriation. ASEAN countries have a direct stake, since forced returns will likely lead to a surge in Rohingya seeking to flee by boat to Thailand, Malaysia and Indonesia.

Appendix A: Map of Rakhine State