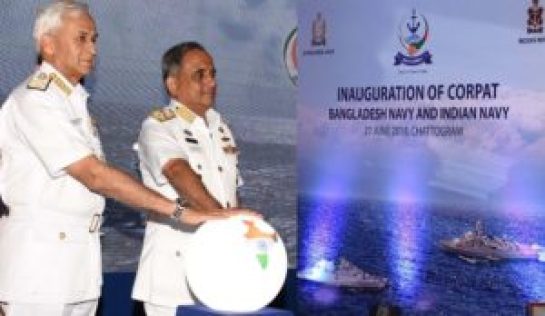 The chiefs of the Indian and Bangladeshi navies on Wednesday inaugurated a program for joint patrols and exercises in the Bay of Bengal to curb maritime crimes and militancy threats at sea, officials said Wednesday.

Warships and aircraft from the two neighboring South Asian nations will begin a maiden six-day patrol in Chittagong on Thursday and sail toward Visakhapatnam, the largest city of the Indian state of Andhra Pradesh, officials said.

“The commencement of CORPAT is a major step towards the enhanced operational interaction between both navies,” the Indian Navy said in a statement.

During a state visit to India in April 2017, Bangladeshi Prime Minister Sheikh Hasina signed a memorandum of understanding (MOU) on bilateral defense cooperation with Indian Prime Minister Narendra Modi. Both leaders also reiterated a commitment to combating terrorism in the region.

“The two prime ministers emphasized the need to further strengthen and consolidate defense cooperation through greater military-to-military training and exchanges,” a joint statement issued by them said on April 8, 2017.

The joint naval maneuvers will take place annually based on the MOU signed by Hasina and Modi, officials said.

“The two navies may also carry out the anti-crime exercises from time to time whenever they feel the necessity,” Kabir said.

He said the two navies would also exchange information and identify vessels engaged in illegal activities in the region.

Jane’s 360, an authoritative website that covers defense-related news, reported earlier this week that India and Bangladesh had “established a new coordinated patrol regime in the Bay of Bengal.”

“The move may be part of New Delhi’s effort to better project its naval footprint across the Indian Ocean region,” Jane’s said.

It was not immediately clear how China, which sold two refurbished submarines to Bangladesh in November 2016, would react to the new Indo-Bangladeshi naval program.

During a news conference in December last year in New Delhi, Lanba expressed alarm over China’s growing influence in the Indo-Pacific region and questioned reports that Beijing has deployed submarines for anti-piracy operations in the Indian Ocean.

“They [China] may say it is for anti-piracy but it’s an odd task to be on anti-piracy patrol,” he said, adding that Chinese naval ships had been coming to the Indian Ocean since 2013.