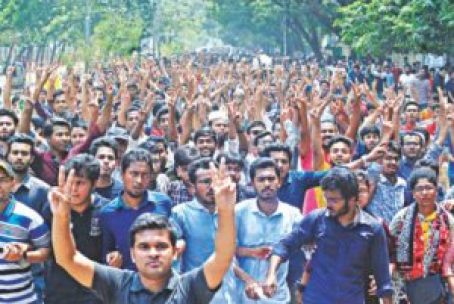 Dhaka: The quota-induced agitation refuses to die down. Despite police action and Chhatra League (student wing of the ruling Awami League) goons cracking down on the anti-quota protagonists, the turmoil is spreading, causing a lingering headache for the government of Sheikh Hasina.
The government, appearing somewhat befuddled and lacking any coherent policy, seems unable to deal with the issue, making it clear the matter is not going to be settled any time soon. But the question is: how did we get here in the first place?

The seemingly innocuous agitation started in April by some Dhaka university students, demanding reforms in the existing “highly lopsided quota system,” disfavoring a large number of deserving, meritorious candidates, quickly spread to other educational institutions in Dhaka and elsewhere.
Caught totally off guard and somewhat terrified by the intensity of the spreading protests across the country, especially after some unidentified elements ransacked the residence of Dhaka University vice-chancellor in the dead of night, Prime Minister Sheikh Hasina rescinded the quota policy in a speech in the Parliament, in apparent desperation to quickly diffuse the explosive situation.

Her declaration appeared to soften the agitating students, prompting them to call off their protests briefly when they were assured that a government committee would soon be formed, which would take necessary steps to implement the PM’s directives shortly.

Two weeks passed, but no visible action was taken by the government, raising serious questions about the sincerity of the prime minister’s move.

To be sure, no government committee has been formed in the nearly four months since she committed. And what has further muddied the situation is Hasina’s latest comment, saying she couldn’t go against the verdict of the higher court, which she claimed the court noted that 30 percent of the government jobs be reserved for the freedom fighters, their children, and grandchildren.

This raises a pertinent question as to why the prime minister hastily made the declaration without proper homework and discussing the matter with her cabinet colleagues as is expected in a parliamentary form of government. To be sure, the High Court made that observation, and it was not its verdict. (By law, the government is not obligated to implement a court’s observation.)
Not surprisingly, the prime minister’s doublespeak further deepened suspicion about her commitment, making the agitating students convinced that they had no choice but to keep on protesting.

Having failed to come up with an acceptable solution to the crisis, the ruling Awami League has resorted to the familiar, yet despicable tactic of tarring the protesters with the same brush of BNP-Jamat conspirators, out to destabilize the country.

It’s inconceivable that a government, which is seemingly in no danger of being ousted by a coup or losing the next election to BNP, its chief rival, should see everybody as a threat and enemy.

Clearly, this is a reflection of paranoia that seems to have engulfed the ruling party, and this is not uncommon for any party that gets elected through the sham election, as it did in 2014.

Is there a way out of the current imbroglio? Sure, there is, provided the government sheds its siege mentality and deal with the quota issue with compassion, rationale, and objectivity.

First, one should keep in mind that it’s the moral obligation of any government anywhere in the world to protect and help the underprivileged and minority members of the society so that they do not feel left out and must enjoy similar rights and privileges accorded to others. So, it must be made crystal clear that the quota system will remain in place for the foreseeable future to create a harmonious society, but at the same time, necessary measures would be taken to correct any anomaly in the system.

This is where the government should start with. To put it in perspective, the 30 percent freedom fighters’ quota is unrealistic and untenable. As we all know, many of the freedom fighters—farmers, day laborers, ordinary folks—struggled hard to eke out a living long after Bangladesh came into being. In those circumstances, it was hard for them to give their children and grandchildren the proper education, which could have made them eligible for government jobs. So, one can safely say that the 30% quota can never be filled with the freedom fighters or their descendants.

The best approach to honor and rehabilitate them would be to give them monetary help and provide long-term income-generation opportunities. To be fair, the present government is doing a commendable job towards that goal.

Another pressing issue that should keep policymakers stay awake at night is the question of a large number of educated youth who come to the job market every year. For instance, some two lac (200,000) fresh graduates compete for 3000 slots in the BCS exam.

The question which should boggle every policy maker’s mind is how to provide gainful employment for the staggering 197,000 graduates, who do not make it to the government service.

No government anywhere in the world can accommodate every fresh graduate in the public sector. Keeping that in mind, the ruling Awami League should strive to create a vibrant private sector and make it attractive for the job seekers, as is the case in the United States and across the developed countries.