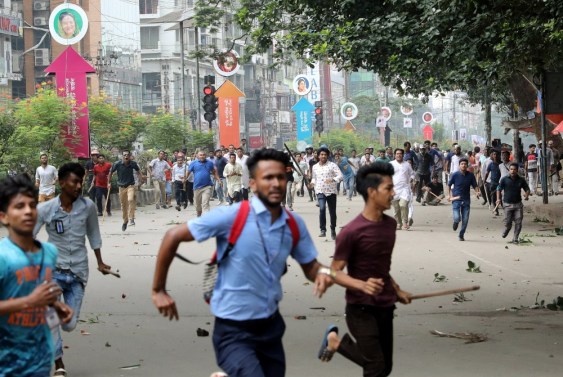 Haggling beneath the surface yields nothing fruitful

Beyond the pale of the ordinary folks, haggling of an inordinate vintage has been on to bring the country’s ‘extra-parliament’ main opposition party, the BNP, into an accommodative electoral fold, according to reliable sources. This months-long beneath the surface haggling yielded no substantive result, making the top brass of the ruling party perturbed by the outcome; due mainly to what one of the sources said “the BNP being adamant and unyielding on two major counts.”

The very first demand of the BNP was that the party leader Khaleda Zia must be released from prison and make it unfettered and unconditional for her to contest the polling. The second tier of the BNP demand was to reverse to some sort of caretaker mode during the electoral interregnum, and hold the election with the constitutionally apolitical military’s umpire-ship, in order to make it fair and inclusive.

Options of the incumbent

The Holiday had learnt that, during the haggling, the option A broached by the ruling party has been to hold the election with a faction of the BNP—minus Khaleda Zia and her son Tarek Rahman, and those who chose to stick to the BNP mainstream—joining the poll.  That option has seen no light of reality, and, seems unlikely to meet its goal before an election schedule is pronounced by the EC sooner, pursuant to the electoral rules and guidelines.

The option B has been to strike a deal with the BNP as it is, Khaleda and Tarek joining the polls or not, as the law may or may not allow their participation while their convictions by the court are in execution.  The inducement to have the BNP partake into such a setup was contingent upon two dividends.

The first dividend was to offer the BNP and its allies 120 seats in total, so that the party (BNP) could return to the next parliament; preserve its registration as a political party by not boycotting two consecutive elections; and, offer the much needed legitimacy to the incumbent regime by enabling it to claim to have had an inclusive, participatory election.

The above-cited option(s) A and B has been tried in secret by the regime and its interlocutors for good old six months; more forcefully since Khaleda Zia’s imprisonment early this year, said a source seeking anonymity. With the approach of the penultimate months of the election year, and the post-Eid crucibles to wrap a deal sooner, or hold another election without the BNP during the constitutionally-stipulated deadline, the necessity to strike a deal that has visible public acceptance and credibility has dawned upon the incumbent regime like a Sword of Damocles.

For public digest, Sword of Damocles is an opt allusion to the imminent and ever-present peril faced by those in power; like that of Damocles who was an servile courtier in the court of Dionysius II of Syracuse, a 4th-century BC tyrant of Sicily.

Amidst this reality, those who think the BNP and its electoral allies can compel the government to craft and offer a caretaker/national government model—like that of the one Pakistan had devised—are wrong on two counts. First: existing Bangladesh constitution has no such model inscribed, and, amending the constitution needs very sincere, patriotic intent of the regime, which is very much amiss.  Secondly: an interim, transitional auto-mode during the interregnum that comes naturally after every five years’ interval has been tried with mixed success and much controversy since the early 1990s.

The best option for now is to arrive at a consensus first; to hold the election under the commandeering of the EC that has constitutional mandate to call for support from any quarter to execute its mission; with the help of the military, which too it’s (EC) empowered to summon under existing laws and guidelines.

As the BNP and its allies do not believe that the EC can fulfill its constitutional obligations with trust and tenacity, the BNP now, and the AL in the past, had hammered for something neutral to do that job.  That very paradigm had given birth to unseen instability first, and, emotional, explosive outburst in the streets later.

The governments by nature tend to be blinded by the texture and taste of power. In the end, the balance of power will decide whether the upcoming election will be held under the so called national/caretaker government, or under the incumbent one as the amended constitution prescribes, or, no election at all during the stipulated deadline for reasons that are yet to emerge due to the fear that the government had instilled in the minds of the people by indiscriminately kidnapping, killing, bashing and bulldozing its dissenters since coming to power in 2009.

During this time, the administration and the law enforcers have been recalibrated intoa partisan mode; the military remains apparently apolitical, as expected; the civic society has been induced with a fear psychosis following ‘high dose of persecutions’ meted out to many of their renown members. These ‘pockets of power’ having been neutralized, the government thinks it can sail through another electoral jaunt without much hassle. But, can it?

History shows, lack of democracy, human rights and justice stood at the root of anarchy sweeping nation-states throughout the ages. Latest examples are Iraq, Libya, Syria, Somalia, and many others. Earlier examples are turbulent revolutions that had swept France, the USA, and many other nations; including a religious revolution sweeping Iran in 1979.Only genuine leaders can stop or stir such turbulences.

One of the main differences between a genuine leader and a demagogue is that the former looks at the broader picture, grasps its content and the contours, and makes a decision to preserve or puncture the status quo as per the desire of the masses. A demagogue, on the other hand, only thinks of his or her personal and coterie interest and makes a decision to be heavy handed to preserve an otherwise untenable status quo.

The days ahead will decide whether our nation has produced true leaders; or, dreadful, despised demagogues. Any deterioration of the country’s existing social, political, economic and cultural fortifications due to an electoral ‘dog-fight’ between the ruling and opposition parties will expose their true nature to the mass, and, the indomitable thrust of the mass will decide what the tomorrow’s Bangladesh will look like. Eid Mobarak.