Are China and Russia teaming up on the US in the Indian Ocean?

are teaming up for a power play in the Indian Ocean have drawn mixed reactions from regional analysts, with some suggesting that Moscow and Beijing are keen to flex their muscles beyond their own shores in a bid to counter US moves in the region while others have pointed out that most forms of cooperation between the two countries are merely symbolic in nature.

Last month, Oriana Skylar Mastro, a centre fellow at the Freeman Spogli Institute for International Studies at Stanford University, wrote that Russia-China cooperation in the Indian Ocean would present a much greater threat to a continued US role and influence in the region than either would individually.

Mastro pointed to two recent naval exercises held between Russia and China – the first in conjunction with South Africa in November 2019 off Cape Town and the second the following month with Iran in the Gulf of Oman – as evidence of the two countries’ sharpened focus on the Indian Ocean region.

China-India stand-off: amid push for fresh talks, a winter of uncertainty

In addition, Russia in November approved a draft agreement to establish a naval base in Port Sudan, on Sudan’s Red Sea coast, which offers a direct outlet to the Indian Ocean. The Russian news agency TASS reported that the facility would be used to carry out ship repairs, replenish supplies and as a resting spot for Russian navy personnel – in addition to being defensive in nature and aimed at maintaining peace and stability in the region.

As for China, it opened its first overseas naval base in Djibouti in 2017, and its navy is said to have increased operations in the Indian Ocean region over the past three decades.
Writing in The Interpreter, published by The Lowy Institute, an independent think tank in Australia, Mastro said that even though the
coronavirus pandemic

might have slowed further military engagements between Russia and China, the exercises signalled Moscow’s and Beijing’s desire to cooperate in the region. 02:28    Russia kicks off Kavkaz 2020 military exercises with China, Iran, Belarus and others

Russia kicks off Kavkaz 2020 military exercises with China, Iran, Belarus and others

“More importantly, they reveal that regional powers such as South Africa and
Iran

, as well as other countries, welcome the increased role of China and Russia,” said Mastro, who is also a foreign and defence policy fellow at the American Enterprise Institute in Washington.

In 2019, Vinay Kaura, an international affairs and security professor at the Centre for Peace and Conflict Studies in India, said that the evolving scope of political and security cooperation between China and Russia presented a challenge for India, given New Delhi’s “uncomfortable relationship with China”.

Kaura wrote in the Indian Journal of Asian Affairs that Beijing was conducting a sophisticated campaign to expand its influence in South Asia and the Indian Ocean region at India’s expense.

At least one analyst pointed to Russia’s proposed construction of a Red Sea base in Port Sudan as an important landmark in its resurgence as a great power, harking back to the Soviet era when Moscow possessed naval bases in South Yemen, Somalia and Ethiopia that provided it with footholds on the Arabian Peninsula and the Horn of Africa.

Samuel Ramani, a doctoral candidate in international relations at St Antony’s College at the University of Oxford, wrote in a commentary published by the Royal United Services Institute, a defence and security think tank, that with just one major naval base in the region currently – in Syria – the Red Sea base “furthers Moscow’s vision of securing recognition as a blue-water navy and revives historical memories of the Soviet Union’s superpower status”.

Is the US behind India’s ‘anti-China games’? Russia thinks so

Dmitry Stefanovich, a research fellow with the Centre for International Security at the Russian Academy of Sciences’ Institute of World Economy and International Relations, said it was quite natural for the Russian navy to want to have a global reach, including in the Indian Ocean, adding that US actions against Russia and China were the main reasons for the “unprecedented levels of cooperation” between Moscow and Beijing.

But even though China’s bulked-up presence in the Indian Ocean has increasingly challenged India’s strategic role in the region, Stefanovich said Russia had tried to avoid siding with either of the two countries.

Russia “remains a provider of all sorts of technology, including military, as well as a mediator that might help to defuse conflicts between Beijing and Delhi,” said Stefanovich, adding that Russia and China will look for new ways to further cooperate in the Indian Ocean.

“The main strategic consideration will be related to making life more complicated for the US and ensuring freedom of maritime operations for Russia and China,” Stefanovich added. 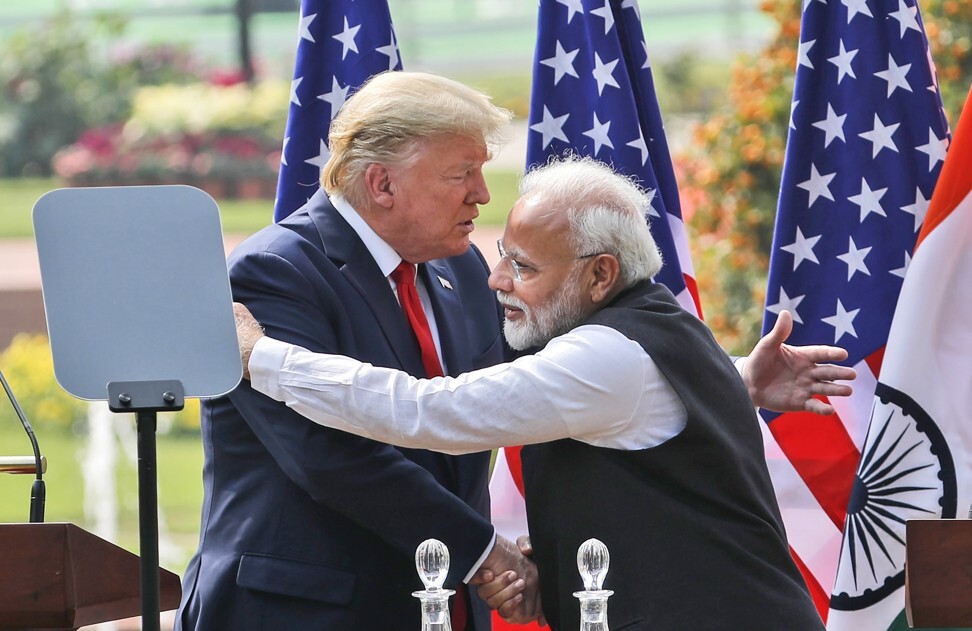 In recent years, China has strengthened its presence in the Indian Ocean by expanding maritime ties with countries such as Sri Lanka and the Maldives and also increasing its submarine fleet and aircraft carriers.

But Zhiqun Zhu, the international relations department chair at the Bucknell University in the US and an expert in Chinese foreign policy and East Asian affairs who wrote the book A Critical Decade: China’s Foreign Policy 2008-2018, said China’s teaming up with Russia for the joint exercises were for the most part aimed at responding to Washington’s more frequent and assertive manoeuvres in the Indo-Pacific region, and were more “symbolic than substantive”.

In November, the US, alongside India, Japan and Australia as part of their revived quadrilateral alliance, conducted joint naval exercises in the Indian Ocean involving not just routine air-sea drills but also the supercarrier USS Nimitz.

Zhu told This Week in Asia that China and Russia may be political and diplomatic partners but “are hardly strategic allies”. For example, he said, Russia has not explicitly supported China’s position in the
South China Sea

and the Taiwan Strait, adding that it would be difficult to expect Moscow to come to Beijing’s aid if China were engaged in a military conflict with the US.

“Russia, realising its limited global influence and economic power, is also not putting all its eggs in one basket. Its warm military ties to India are obviously not well received by Beijing,” Zhu said, referring to Russia’s sale of arms to India and to long-standing defence cooperation between the two sides.

Russia’s sale of strategic weapons to India at a time when India-China border tensions were high was particularly disappointing to Beijing, he said.

“One should not exaggerate the closeness of the China-Russia relationship today,” he added.

Even though India is concerned about Russia’s and China’s increasing interest and naval manoeuvres in the Indian Ocean, Swaran Singh, professor and chair at the Centre for International Politics, Organisation and Disarmament at Jawaharlal Nehru University in New Delhi, said India had chosen to respond by drawing closer to the US and other allies.

Under this “balancing act in engaging all major powers”, Singh said India continued to engage Russia and China through regional platforms such as the Shanghai Cooperation Organization and the BRICS bloc, which refers to the five major emerging national economies of Brazil, Russia, India, China and South Africa.

And while India remains cautious of China’s expanding presence in the Indian Ocean, Singh said India “sees nothing to be paranoid” about in the China-Russia naval exercises with littoral nations like South Africa and Iran, especially given India’s “powerful navy and locational advantage”.

Russia has ambitious plans to become a world-leading travel destination

Russia has ambitious plans to become a world-leading travel destination

Also expressing scepticism of any form of China-Russia security cooperation in the Indian Ocean, Derek Grossman, a senior defence analyst at the Rand Corporation, a Washington think tank, agreed that the naval exercises between the two countries were mainly symbolic in nature and achieved little in terms of exchanges in tactics, techniques and procedures (TTPs) or in enhancing interoperability.

And unlike China, Russia was short on and likely to conserve its resources for “issues of greater importance to Russia”, Grossman noted.

“I don’t think Russia would want to alarm its long-time friend, India, by ramping up its military presence in the region, especially in concert with an obvious adversary in China,” he said, referring to the strained relations between China and India, most notably over their military stand-off at their shared Himalayan border.

Maria Siow is a long-time China-based correspondent and analyst with keen interest in East Asia. Maria has a masters degree in international relations.