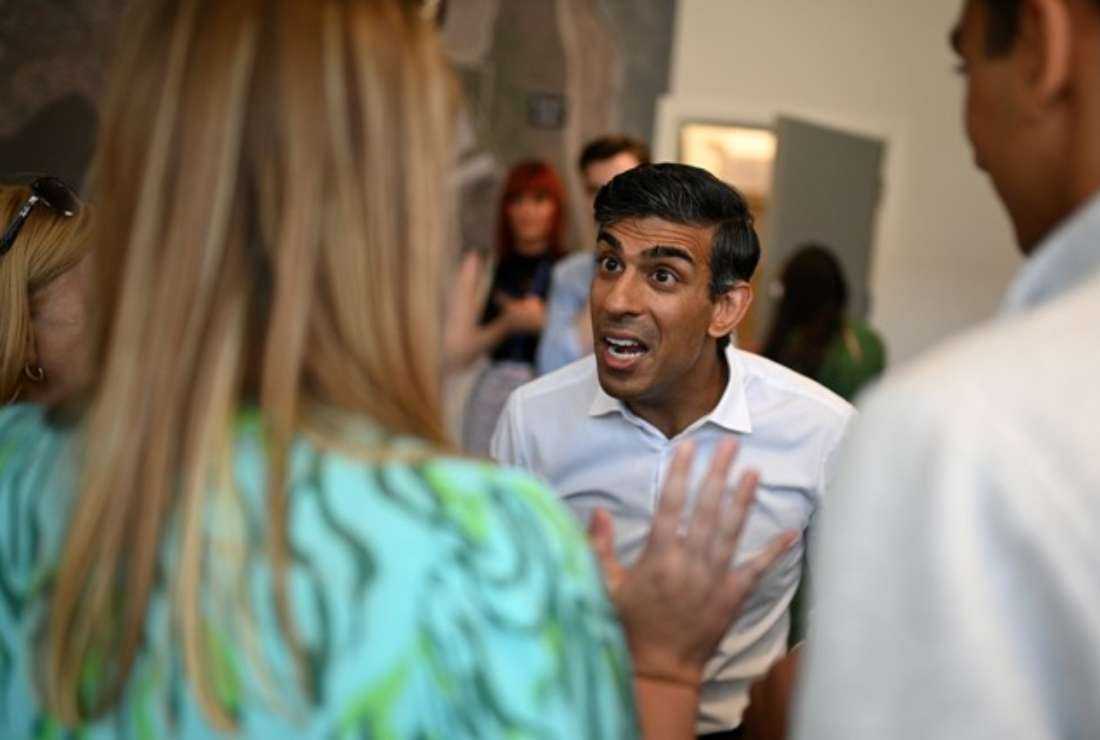 Conservative MP and Britain’s former chancellor of the exchequer, Rishi Sunak, (center) talks to activists and supporters as part of his bid to become the next leader of the Conservative party during a visit to Teesside Freeport in Redcar, northeast England, on July 16. (Photo: AFP)

Since the Ukraine crisis started on Feb. 24, three governments have been unceremoniously shown the door. If two of them — Imran Khan in Pakistan and Mahindra Rajkapse in Sri Lanka — happened to be in Asia, there appears little doubt that it was people from Asia who triggered the upcoming exit of Boris Johnson as British prime minister this month.

Britain as a nation now has quite a few descendants of Asian immigrants in prominent positions. After Johnson is sent packing, Asians are going to loom large in shaping British domestic and foreign policies in the years to come.

In the latest development, Indian-origin British MP Rishi Sunak won the backing of 118 MPs and is in pole position to replace Boris Johnson as British prime minister.

With Asians gaining more influence in British politics, the perception of what ultimately constitutes ‘The West’ may also come under scrutiny. This Asian touch with its business and political interests has already differentiated Britain from the rest of Europe.

It was the two most prominent South Asian politicians — Sajid Javid and Rishi Sunak — who triggered a series of rapid moves that eventually resulted in the resignation of a self-serving, delusional Johnson.

Javid, secretary of state for health, whose parents migrated to the UK from Pakistan in the 1960s, was the first cabinet minister to quit on July 5. Later, Sunak, Chancellor of the Exchequer, and son-in-law of India’s Infosys founder Narayana Murthy followed suit.

The final nail in Johnson’s prime ministerial coffin was struck by Nadhim Zahawi, who came to Britain in the 1970s when his Kurdish parents fled Saddam Hussein’s Iraq.

Sunak started his political career seven years ago. Though having limited political experience when he became finance minister in 2019, he was soon touted as the first in line to step into Johnson’s shoes.

He and his wife, Akshata Murty, came under fire this year for their massive wealth and Murty was rebuked for retaining non-domicile status which helped her avoid paying £20 million (US$24 million) in UK taxes.

No wonder Sunak said in his resignation letter that he might never again occupy a ministerial post.

As a flag-bearer of the Conservative Party, Sunak has been a Member of Parliament (MP) for Richmond (Yorkshire) since 2015.

Sunak was born in Southampton after his Indian parents emigrated from East Africa and was educated at Winchester College. As a professional, Sunak earlier worked for Goldman Sachs.

After Johnson became prime minister, he handpicked Sunak as Chief Secretary and he stepped into Javid’s shoes as chancellor of the exchequer after his resignation in February 2020. Sunak has extensive connections with India and its commercial elite.

Unlike Sunak, Javid, however, did not hide his political ambitions when he delivered a powerful resignation speech in parliament, which also set the tone for his political career.

Javid has been a Conservative MP for Bromsgrove (Worcestershire) since 2010.

In the 2019 Conservative Party leadership race, Javid finished fourth. Later, Johnson appointed him chancellor, which he quit in February 2020.

In June 2021, Javid was reappointed as health secretary.  He earned kudos for his deft handling of the British government’s response to the COVID-19 pandemic. Though born to a Muslim family, Javid himself is a non-practicing Muslim.

Born to a Kurdish family in Baghdad, Zahawi is the co-founder of the internet-based market firm YouGov. On July 5, 2022, he became chancellor after the resignation of Sunak.

Two other politicians of Asian origin also quit the cabinet to pave the way for Johnson’s exit.

One was Priti Patel, who owes her current plum post as home secretary to Johnson. The acerbic Patel has been in the eye of a storm recently for her failure to cut illegal immigration.

Patel has been an MP for Witham (Essex) since 2010.  She is a hardcore right-wing politician. In January 2017, Patel bagged the Indian Pravasi Bharatiya Samman, the highest honor given by the Indian government to non-resident Indians or people of Indian origin.

The other was little-known Suella Braverman, the attorney-general whose mother was born into a Tamil Hindu family.

Both Labour and Conservative governments welcomed immigrants from 1948 as workers were needed for the post-war reconstruction of the UK. From the 1970s to the 1990s, the governments pushed forward economic globalization, which ensured great prosperity and economic competitiveness for Britain.

The influence of Sunak and Javid shows the enormous influence Asians now have in Britain, though an Asian prime minister might be one step too far for many Britons.

With the war in eastern Europe, involving Russia and Ukrainian forces lingering on, it is Asia and Asians who are acting as catalysts of change worldwide.

*The views expressed in this article are those of the author and do not necessarily reflect the official editorial position of UCA News.