Among so many killings of journalists, why does the fate of Jamal Khashoggi stand out?

There are autocrats. Look around.

According to Freedom House, a quarter of the world’s states are “not free.” More than a third of the world’s population live in those states. “Undemocratic regime kills journalist” is a headline that, most of the time, vies with “Dog Bites Man” for the bottom right column of page 5.

However, the fate of the Saudi journalist Jamal Khashoggi — who has not been seen since entering the Saudi consulate in Istanbul on Oct. 2 — has become front page news. Why?

Cynical commentators have been reminded of Stalin’s observation that “the death of one man is a tragedy, the death of millions is a statistic.” After all, the Saudi regime has been killing a great many people in Yemen, where its armed forces have been fighting Houthi rebels since 2015. Only on a very slow news day does that war make the front pages.

Get Today in Opinion in your inbox:
Globe Opinion’s must-reads, delivered to you every Sunday-Friday.

Yet this misses the real point. Democratic states also go to war from time to time and generally kill plenty of people when they do. Making war is not a peculiarity of autocrats. But democratic politicians cannot order the assassination of journalists (even if they may sometimes fantasize about doing so). 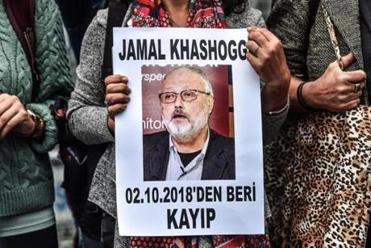 Saudi dissident Jamal Khashoggi may be the latest victim in a world where autocratic governments see journalists as fair game.

The real question here is why Khashoggi’s fate is attracting so much more attention than that of say, Ibrahim al-Munjar, a correspondent for the Syrian news website Sy24, who was shot and killed in the city of Saida on the morning of May 17.

According to the Committee to Protect Journalists, Khashoggi is only one of 44 journalists killed this year so far, of whom 27 were murdered. Ten of the victims were journalists working in Afghanistan, under a government that depends on US military support. I’ll bet you can’t name a single one of them.

The explanation for the storm around Khashoggi is simple. First, he worked for The Washington Post. Second, the strong suspicion that he has been murdered at the orders of the Saudi government is highly embarrassing to the administration of Donald Trump — if not to the president himself, who is of course incapable of being embarrassed — because resuscitating the relationship between Washington and Riyadh has been central to its strategy in the Middle East.

It should go without saying that I deplore the murder of Khashoggi, if that was indeed the fate that befell him. But I deplore all murders, not just the murders of journalists who work for the Post. I am also strongly opposed to wrongful imprisonment. The government currently pointing the accusing finger at Saudi Arabia is none other than Turkey’s. Right now, 68 journalists are serving jail sentences in Turkey, with a further 169 held awaiting trial.

In Washington, the chorus of the permanently indignant is now demanding that Treasury Secretary Steven Mnuchin join the boycott of the upcoming investment conference nicknamed Davos in the Desert. But some Republicans are also up in arms. On Thursday, the Republican chairman of the Senate Foreign Relations Committee, Bob Corker, said the United States should impose sanctions on Saudi Arabia if Khashoggi has indeed been murdered.

Wait a second. The Turks say they have audio and video evidence to prove their allegation. Let’s see it first, shall we? Because I no more trust the Turkish dictator, President Recep Tayyip Erdogan, than I do Saudi Crown Prince Mohammad bin Salman. And Erdogan has no shortage of motives for skullduggery of his own. He has every reason to mistrust his Russian spouse-of-convenience, Vladimir Putin, when it comes to Syria. His currency just fell off a cliff and his banks are in trouble, so he could use some help from the International Monetary Fund. Funny how the Khashoggi story breaks the same week as the Turks release the American pastor Andrew Brunson.

As I said, there are autocrats — lots of them, and especially in and around the Middle East. When it comes to press freedom, it’s a really close ugliness contest. Is the United States supposed to have diplomatic relations only with liberal democracies? If so, that means just Israel. Hands up all those in favor of that approach?

The problem is not a new one; it is as old as American foreign policy. You can’t be a great power, much less a superpower, and not have dealings — and sometimes alliances, too — with nasty, undemocratic regimes. And the mere fact that you form alliances with them won’t make them change their ways.

You would think by now this simple truth would be obvious. But no. There will always be a market for hacks wanting to write “J’accuse” articles about any president or secretary of state who has “blood on his hands” because he shook the hands of dictators.

In foreign policy, sad to relate, the measure of success is not the cleanliness of the hands you shake; it’s how far the strategy you pursue achieves its intended goals. I still rate the Trump administration’s strategy higher than that of Obama, because confronting Iran with a broad coalition — from Israel to Saudi — makes more sense than betting on good behavior by Tehran, which was the essence of the Joint Comprehensive Plan of Action.

Will this strategy make the Arab autocrats nicer people? Did the Iran deal make the ayatollahs any sweeter?

Niall Ferguson is a senior fellow at the Hoover Institution at Stanford University.