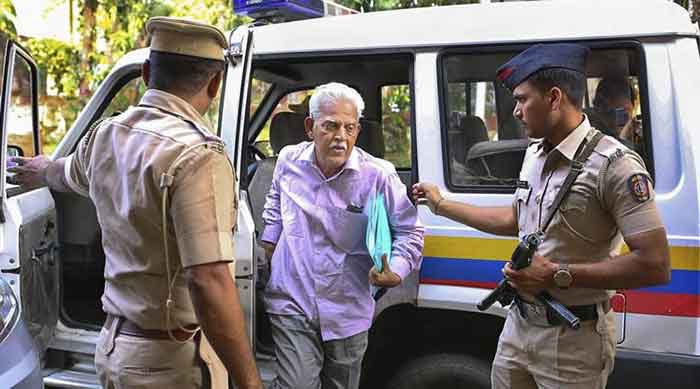 We have watched with growing horror the treatment meted out to the 81 years old Revolutionary Poet, Varavara Rao by the Indian state. Varavara Rao has been incarcerated in Taloja jail in Mumbai for almost two years. According to the latest media reports and press conferences held by his family, Varavara Rao was exhibiting signs of serious illness, with the inability to walk and deliriousness since early July. It is shocking to learn that it took multiple pleas by his family members and an international campaign for the Taloja jail authorities to even take him to JJ hospital for treatment where he was diagnosed with COVID-19. Family members who finally managed to see him found him lying on urine-soaked sheets on a hospital bed, alone with no one to take care of him. Even his family members were not permitted to help him.

What happened to Varavara Rao, or VV as he is popularly known, was foretold in multiple petitions that were filed before the court pleading that he is granted bail due to the dire situation in the jail, his age and his underlying comorbidities. Yet time and again these pleas have been rejected.

India has already released thousands of undertrials on bail to prevent prisons from becoming COVID-19 hotspots. The Bhima Koregaon undertrials, of whom VV is one, have been accused of political crimes. The cases against them are widely believed to be false. Given that the judicial process in India is grindingly slow, one cannot but conclude that the only reason for their incarceration in these conditions is to ensure that the process itself is their punishment. This callousness of the judiciary and the investigative agencies (the NIA) amount to state-sanctioned custodial torture.

This is the second time in the last few months that VV has been hospitalized, pointing to the increasing precariousness of his health. On May 28th of this year, VV was taken to JJ Hospital, in an unconscious state according to his family members. However, he was returned to jail before he made a full recovery. In only about a month his condition started deteriorating sharply. After pressure from his family and an international campaign by intellectuals and human rights activists, he was again taken to hospital on July 13th when he tested positive for Covid-19.

As is well known by now, COVID-19 carries very serious risks for people above 80. We fear for VV’s life and we call upon the jail authorities, the judiciary, and the police to release him so that his family can provide adequate medical care. The next few days are critical. We call upon the justice and freedom-loving people the world over to stay vigilant and continue to pressure the Indian government to act with humanity.

Alliance for a Secular and Democratic South Asia (USA)