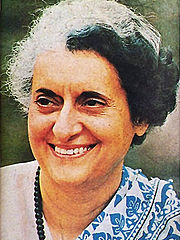 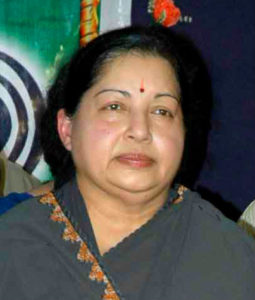 If something stands out in the one year since Jayalalithaa’s passing, it would be her famed leadership qualities and her ability to reach out to the party and the people above the second line, and also the state administration, to the exclusion of all the rest. Only Indira Gandhi had achieved it all in her time, and no other leader, possibly excepting Prime Modi Modi, could hold a candle to that, says N Sathiya Moorthy.

Jayalalithaa Jayaram has been dead for one full year. As events and developments of the past year have shown, the memories of Amma have become as faded and jaded as she was controversial when around and in control.

It is sad but true that Jaya led a party not designed to have a commanding second-line since inception with the result the All India Anna Dravida Munnetra Kazhagam has been left both clueless and rudderless to levels that the succession battle now is etched in the institutional inadequacies that she had nurtured in her time.

Before Jayalalithaa, political mentor and party founder M G Ramachandran, even while encouraging her to a leadership role, was always afraid of her as much as he might have adored her grit, determination and charisma at a very personal level.

Whatever lessons that Jayalalithaa had learnt from MGR when alive and after death, she came to enforce in the party, more so after her historic and uncomplicated election as chief minister in the 1991 elections held under the shadow of the Rajiv Gandhi assassination.

With a difference, however, when compared to MGR. Both exuded charisma, but Jaya’s greater grit found full and easy flow in the circumstances attending on her election as chief minister.

She misread DMK’s full rout in 1991 and committed unmitigated mistakes, compounded by unmasked arrogance and an equal amount of ignorance masquerading as political intelligence of the highest order.

In the party affairs, however, she successfully and successively sidelined all second-line leaders from the MGR era and more, with the result that her over-dependence on the over-ambitious family members of her equally determined and even more cunning live-in aide, V K Sasikala Natarajan, became complete even by the time the party and Jaya lost elections 1996 so very completely.

The rest, as they say, is recent history.

Today, the AIADMK is a house still divided, despite the initiatives of the ruling BJP at the Centre to divide the second line first, and re-unite them later, and the Election Commission too sending the competing Sasikala leadership and group to the dog house, at least for now.

The weaker the camp under jailed Sasikala and identified outside with her nephew and ‘deputy’ T T V Dinakaran becomes, greater are the chances of the inherent strains in the ruling EPS-OPS faction, going by the official name and symbol of the AIADMK, coming out in the open.

The dice, however, is loaded in favour of Chief Minister Edappadi K Palaniswami, who has proved to be more astute in handling the BJP-ruled Centre on the one hand and neutralising the OPS group within, leaving the likes of EC to deal with the Sasi-Dinakaran camp, again for now at the very least.

Palaniswami, or EPS as he is known, does not exude the MGR-Jaya kind of charisma, but from closer observation of the latter and possibly Sasikala, too, he has acquired their combined trait for bossism within the party and possibly within the government even while wearing a picture of eternal innocence all over the face and body for the rest of the world to see — and hopefully believe.

It is not without reason, either.

The way Jaya had reduced Tamil Nadu’s most popular political party of all times to the levels of her ‘kitchen cabinet’ comprising almost exclusively of the Sasikala family until one stage, things could not have been anything better.

If, however, the AIADMK still remains a political entity worthy of discussion, it owes to two other factors — both external.

Two, in the BJP, the AIADMK as a party may have found a saviour in the end, though in between there can be no denying the ruling party at the Centre was stirring the confused AIADMK.

But for the BJP’s perceived and perceptible interest and intervention, whichever way one looked at it, the AIADMK cadres can thank Prime Minister Modi and BJP boss Amit Shah, for the post-Jaya party still retaining some shape to remember her on her first death anniversary.

Like the proverbial ‘acts of god’, these two separate developments have kept the AIADMK going, till today.

Yet, there is no ignoring the BJP’s continual and continuing schemes for the AIADMK.

Nor can one deny the relatively better popularity of DMK’s M K Stalin when it came to a leader who could make a difference to the state’s fate and future, if there is anyone around.

But, then, the temptation for Stalin to err is as much as obsession to win and opportunity to succeed.

For now, the Madras high court has ruled that pending the findings of the Justice Arumugasami commission of inquiry into Jaya’s death, the official date of her death remains unaltered, and the state government could observe her death anniversary on December 5.

Both identifiable though not abrasive factions within the official AIADMK, and also the rival Sasi-Dinakaran group, could be expected to observe Jaya’s first anniversary with relative pomp than that the occasion might otherwise demand.

But, then, every time Sasikala’s name or that of Dinakaran or any of their kin appears in the news in relation to the affairs of the AIADMK, or relating to all the pending court cases and possible tax raids in the future, the thought of their owing and owing it all only because Jayalalithaa wanted it that way — rather than not being able to prevent it all from happening — could not escape such fading memories about her own self and her legacy.

And every time the EPS-OPS led party and their affairs come into focus, including reports about past tax raids and future possibilities, be it fiscal or political, similar thoughts about Jaya’s contribution to the same, and their continual sidelining by her even before elections 2016, only months before her long hospitalisation and ultimate death too, cannot but come back to one’s mind.

If above all this, something stands out, it would be Jaya’s famed leadership qualities and her abilities to reach out to the party and the people above the second line, and also the state administration whenever in power, to the exclusion of all the rest, jointly and severally.

Only Indira Gandhi had achieved it all in her time, and no other leader, possibly excepting PM Modi, could hold a candle to that.

Today, when someone recalls Indira Gandhi’s legacy, no one mentions the Bangladesh war victory or Pokhran I, but only about the Emergency and Sanjay Gandhi’s parallel administration, both of which have put all Congressmen on the defensive all the time, since.

From today on, likewise, whenever and wherever Jaya’s legacy becomes a discussion point, it could become debatable, too. Rather than her grit and determination, her electoral charisma and proven administrative prowess, only her dictatorial tendencies and her insatiable need to lean only on the kind of worthies that she has left behind, would come back to mind — for now and possibly ever.