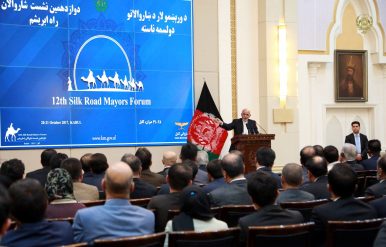 By M. Ashraf Haidari
Reviving and building connectivity across the Eurasian landmass based on the commercial networks of the ancient Silk Road underpins one of the key economic goals of the Asian continent. Asian nations will stand to gain the most from increased trade, commerce and investment along the Silk Road when it is reconnected through transport infrastructure. Moreover, increased connectivity would dramatically enhance multifaceted human interaction, bringing Asian nations together to address such global challenges as terrorism and climate change that firmly stand in the way of sustainable development.

Afghanistan is situated at the heart of Asia and its cities of Kabul, Balkh, Herat, Kandahar, and Bamyan constituted some of the key Silk Road passages, through which trade, culture, religions, syncretic philosophies, and technologies freely flowed to reach every corner of Eurasia. Given its former status as the center of Silk Road, Kabul hosted the 12th Silk Road Mayors Forum on October 20-21, 2017. The event was organized by the Kabul Municipality and the World Citizens Organization.

President Mohammad Ashraf Ghani opened the Forum at the Presidential Palace-Arg, bringing together mayors, diplomats, scholars, and business leaders from the Silk Road countries. They discussed the interwoven histories and civilizations of the Silk Road era and focused on the current and future opportunities for interstate and intercity cooperation and partnership to advance their shared interests in the 21st, globalizing century.

Enjoying this article? Click here to subscribe for full access. Just $5 a month.However, as municipal delegations arrived in Kabul, heartless terrorists with safe sanctuaries in Pakistan attacked two mosques with scores of civilian casualties in Kabul and Ghor on October 20. They did so in the name of Islam but actually demonstrated how far they had strayed from the core tenets of Islam — a religion of peace, tolerance, coexistence, and win-win exchange through commerce, culture, science, and humane diplomacy. Indeed, Islamic scientific and medical advancement had a significant impact on Silk Road travelers. Chinese Buddhist traders adopted Islamic medical knowledge in urinalysis and healing wounds. And Muslims brought South Asia their insights on astronomy, including a skepticism of the geocentric universe.

In speaking to the Silk Road mayors, President Ghani praised their courage to visit Afghanistan and participate in the Forum. He noted that their defiance of the terrorist threats signified a message of firm belief in and support for the unwavering determination of the Afghan government and people to regain their country’s former status as the “center of the Asian crossroads.” In doing so, the president encouraged Afghanistan’s provincial mayors to network with their Silk Road counterparts both to exchange municipal experience and expertise on issues of urban planning and development and to further enhance people-to-people contacts between the cities of Afghanistan and those of the participating countries.

Following the presidential reception, the Silk Road mayors joined leading thinkers and experts to discuss, among other things, the importance of creating business partnerships in Silk Road countries and Kabul’s role in connecting the countries. On the second day, they discussed such issues as citizen diplomacy, the importance of creating Silk Road sister-city relations, the evolution of housing architecture in Silk Road countries, land management reform, as well as urban traffic and waste management.

Moreover, the Silk Road mayors got a full taste of the Silk Road traditions associated with Afghanistan. They were treated to a Gala Dinner, following which they visited a cultural exhibition, in the magnificently historic Babur Gardens, of Afghan cuisine, kites, games, and entertainment from The Miraculous Love Kids and a Sufi Mystic Dance by the Balkh Samaa Group. A fashion show displaying over 20 different clothing styles of Afghanistan’s diverse regions on the Silk Road followed the Kabul Municipality orchestra playing music for the traditional Attan Dance.

The performance of artists, including Afghan youth and children, impressed the mayors, who praised the resilience of Afghans in the face of daily security and poverty hardships imposed on their country.

The Forum productively ended with many contacts established between Kabul and the invited cities from inside and outside. The mayors of Bamyan and Lashkargah signed MOUs with the mayor of Maldives to establish sister-city relations aimed at initiating tourism, cultural, and commercial ties between their cities. Other participants expressed support for Kabul Municipality’s young leadership, as they continue implementing structural reforms that would help modernize Kabul towards sustainable urban development.

All told, as President Ghani recently reminded an audience in Delhi, India, “We have been at the heart of networks: a roundabout, a place of meetings, civilizations, religions, cultures and, of course, armies and traders and pilgrims.” Centuries on, Afghanistan enjoys the same status as the principal connector of the North and South and the East and West. Indeed, Iqbal, the poet laureate of Pakistan, best captured this when he noted:

Asia is a body of water and earth, of which the Afghan nation is the heart
From its discord, the discord of Asia; and from its accord, the accord of Asia.

A Visiting Fellow at Observer Research Foundation (ORF) and the Afghan Institute for Strategic Studies (AISS), M. Ashraf Haidari is the Director-General of Policy & Strategy of the Ministry of Foreign Affairs of Afghanistan, and formerly served as the country’s Deputy Chief of Mission to India. Prior to this, he was Afghanistan’s Deputy Assistant National Security Advisor, as well as Afghan Chargé d’Affaires to the United States. He tweets @MAshrafHaidari.

The article appeared in the Diplomat magazine on November 02, 2017