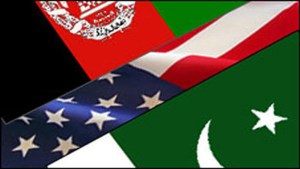 Adnan Qaiser is a Research Associate at Conference of Defence Associations Institute, Canada with a distinguished career in the armed forces and international diplomacy. He investigates factors hampering peace and stability in Afghanistan corresponding to the ongoing US policy review on Afghanistan.

While the history of Afghanistan is written in blood; it is also inked in flawed outlook and failed policies. Apart from Afghans’ internal paradoxes (discussed in my last analysis: “Afghanistan: A Graveyard of Empires or an Afghan Cemetery?”), a landlocked Afghanistan’s near-hostile relations with Pakistan – upon which the country is politically, economically and socially dependent – and United States muddled approach remain obstacles to peace. The umpteenth time US policy review affirms the failure of strategies in the past fifteen years: changing goals from counterterrorism to nation-building and from counterinsurgency to training and support.

Despite former president, Hamid Karzai, describing the two countries as “conjoined twins,” Pak-Afghan historic mistrust and animosity remain unending. Claiming Pakistan’s Pashtun areas (Pashtunistan), Afghanistan has been the only country to have refused to accept Pakistan in 1947 – denying the Durand Line border until today. Historian William Dalrymple calls them “enemies since birth” for a reason.

Pak-Afghan relations are presently in a nosedive. Despite having lodged their families and establishing their businesses in Pakistani cities – not-to-mention receiving training and funds from Pakistan’s Inter-Services Intelligence (ISI) during the Afghan jihad against Soviet Union – Afghan leaders (then Mujahideen commanders) keep accusing the ISI for Afghanistan’s unrest by sheltering the Pashtun Taliban. National interests of states are blind-and-brutal; Pakistan’s military remains wary of Afghanistan slipping into the hands of its archrival India (through non-Pashtun ethnicities) or slide into another civil-war (similar to that of 1992), causing a refugee crisis, yet again (with some three million already on Pakistan’s soil).

US Constraints or Perplexity?

As US policy remained confounded inside Afghanistan, it stayed constrained when it came to Pakistan. Notwithstanding a number of drone strikes in Pakistan’s lawless tribal areas, the country’s 74% anti-Americanism and its nuclear-armed status impeded any direct US involvement. Thus, when former US special representative to Afghanistan and Pakistan, Richard Holbrooke, had opined, “We may be fighting the wrong enemy in the wrong country;” Pakistan’s designation as a “major non-NATO ally” belied his assertion. Likewise, US national security advisor, General McMaster’s recent counsel to Pakistan, “[to] pursue their interest in Afghanistan … through diplomacy not through the use of proxies that engage in violence,” has been negated by US CENTCOM commander, General Joseph Votel, who, in his testimony to the Senate Armed Services Committee admitted: “[As] a very positive sign and a move in right direction [the Pakistanis] have done things against the principal concerns we have; the Haqqani network and Taliban.”

By angering Pakistan’s military through his public snubs, Mr. Ghani has, however, shut any prospects of achieving Afghanistan’s stability. When Ghani thundered at the ‘Kabul Process’ about Pakistan waging an “undeclared war of aggression” against Afghanistan, pat came the response of Pakistan’s army chief, counselling to address problems at home instead of blaming Pakistan for Afghan woes. Mr. Ghani has probably forgotten that having lost the first round of presidential election to Mr. Abdullah in 2014, Ghani’s surprise leap to the “Arg” (presidential palace) by a huge margin in the run-off was not possible without Pakistan’s help – exercising Afghan refugee vote and its Pashtun influence. However, bolstered by NATO’s support until 2020 (a technocrat) Ghani not only rebuffed Pakistan’s US$500 million aid offer (at the Heart of Asia Conference in India) but also did not attend the Economic Cooperation Organization summit in Pakistan. While Ghani’s predecessor visited Islamabad 21 times, the incumbent keeps spurning Pakistan’s invitations to improve ties.

A series of terrorist attacks in February 2017 – reportedly originating from Afghanistan – led Pakistan to close the border for over a month; gave shoot-on-sight orders for any illegal entry and also carried-out artillery-shelling of terrorist camps inside Afghanistan. In a tit-for-tat action both governments not only exchanged a list of terrorists, demanding their handover; but in a rare departure from diplomatic norms, the military chiefs from either sides also summoned the respective ambassadors to lodge protests (and embarrass the other). The extent of hostility can be gauged from the recent exchange of fire at the Chaman border crossing – which Pakistan called “foolish” – leaving at least 15 people killed and dozens others injured over border-area claims.

The confessional video of Tehrik-e-Taliban Pakistan’s (TTP) spokesperson, Ehsanullah Ehsan – acknowledging Afghan and Indian intelligence agencies’ support in carrying-out terrorist activities in Pakistan – gives credence to Pakistan’s accusations on Afghanistan for providing refuge to the TTP as well as allowing the Indian intelligence to cause subversion in Pakistan – a fact acknowledged by Chuck Hagel, former US defence secretary. Afghan officials were earlier caught “cultivat[ing] a shadowy alliance” with the TTP, when another terrorist, Latif Mehsud, was apprehended by the US forces in Afghanistan in October 2013.

US: Treading the Beaten Track to Failure

Meanwhile, seeing the war in a “stalemate” – an admission of not winning, if not failure – US General John Nicholson’s demand for “a few thousand” additional troops will remain another futile exercise similar to the surge of 2009. Seeing a “total mess” in Afghanistan, Pakistan’s military has already warned the US generals about their “losing control” to a “Syrian-style intervention” by Russia. Making Washington understandably upset, the Moscow conference (14 April 2017) – as well as previous consultations between Beijing and Islamabad – demonstrate a regional consensus on Russia’s broader role in Afghanistan.

While it is unwise to outlive one’s utility or outstay one’s welcome, White House’s deliberations on a new strategy for Afghanistan – including a longer-term stay and ‘punish-Pakistan’ approach – apparently comes from several warnings from the US officials. In their testimonies to the Senate Intelligence Committee, not only national intelligence director, Dan Coats, observed: “Afghanistan will almost certainly deteriorate through 2018;” Pentagon’s director of the Defence Intelligence Agency, Lt. Gen. Vincent Stewart also cautioned that unless “something very different” is done “we’ll lose all gains invested over last several years.” Amid apprehensions about Afghanistan becoming another proxy-battleground between the US and Russia (after Syria), Americans should be mindful of their remarks for when they used to chide the Soviets for not accepting their defeat in the Afghan jihad during 1980s, it was by taunting: The Soviets want to fight to the last Afghan.

The introduction of a bill in the US Congress to revoke Pakistan’s status as a ‘major non-NATO ally’ and slashing of military reimbursements for Pakistan’s role in the war-on-terror, point toward US change of heart. In my May 2016’s analysis: ‘Afghanistan’s Future: Murkier and Melancholic,’ I had noted that by making Pakistan the fall-guy, “US may be trying to send a signal to Pakistan that its utility – after the NATO-Afghan War – is over. However, America should be mindful of a few things: One, US policy of abandoning the region (and Pakistan) after the Soviet-Afghan War had disastrous results. Two, US courtship with India through various nuclear and defence deals carry far-reaching implications for strategic stability in South Asia. And three, coercive tactics never worked on Pakistan; the economic sanctions imposed through Symington, Glenn and Pressler Amendments failed in stopping Pakistan’s nuclear program.”

Contradicting the (preposterous) accusations of Afghan Ambassador to the US, Hamdullah Mohib, at a recent seminar as “misleading” and inaccurate, Robin Raphel, who had served as US Assistant Secretary of State for South and Central Asia, has noted that a lack of clarity in Washington’s policies was preventing Pakistan from breaking its links with the Haqqani network.

In my November 2015’s paper, titled ‘Pakistan’s Formula for Afghan Salvation,’ I had tried to ‘perceive and present’ Pakistan’s predicaments in supporting the Afghan Taliban. I had noted, for instance: “Those who blame Pakistan for providing sanctuary to the Taliban need to be mindful of a few things. First, no matter how loathsome its practices, the Taliban remain part of the Afghan ethos and reality. Belonging to Afghanistan’s 60 percent Pashtun populace, they control sizeable rural areas and draw grassroots support from Afghanistan’s largely conservative and religious society – primarily for delivering justice against successive corrupt and inefficient Afghan governments. Secondly, both countries have historically strong ethnic, cultural, religious, and geographical linkages. Third, rightly or wrongly, nationalist groups always receive outside support during ethnic conflicts (India, for instance, supported the Mukhti Bahinis in East Pakistan, now Bangladesh, as well as Liberation Tigers of Tamil Eelam in Sri Lanka; likewise, the international community supported the Malayo-Polynesans in East Timor, Bosniaks in Bosnia Herzegovina, and Christian community in South Sudan). Finally, national interests of states are always blind and brutal.”

Taking “responsibility” for the past policies, former US Secretary of State Hillary Clinton had courageously admitted, “Let’s remember here … the people we are fighting today we funded them twenty years ago … and we did it because we were locked in a struggle with the Soviet Union.”

“Pakistan’s dilemma, however, is fourfold. One, it has little leverage over an obstinate Taliban; Pakistan’s foreign affairs advisor, Sartaj Aziz, admitted, Pakistan has some influence over Taliban but no control. The second issue is how to persuade the Haqqanis for reconciliation while simultaneously using force against them under US pressure. Speaking at the US Institute of Peace (in October 2015), Prime Minister Nawaz Sharif reiterated Pakistan’s willingness to assist peace talks. But he also noted that they could not bring the Afghan Taliban to the negotiating table “and be asked to take action against them at the same time.” Three, Pakistan is unwilling to antagonize the Taliban given the group’s strong chances of returning to power (in some form or another). And four, Pakistan needs the Haqqanis to keep its bête noire, the Tehrik-e-Taliban Pakistan, tamed.”

Finally, a word of caution: Treated unfairly, Pakistan has the wherewithal to inflict pain, where it hurts, in what is sometimes called as ‘Pakistan’s fifth province.’

To avoid failure in Afghanistan, a delegation of US Institute for Peace has recently proposed to the Trump administration: 1) Focus on destroying all Islamic State and al-Qaeda elements; 2) Adopt a political strategy to address the drivers of conflict; 3) Aim for an Afghan-led and Afghan-owned peace process without targeting Taliban’s military defeat; 4) Rebuild a regional consensus for a stable Afghanistan, and; 5) Address Pakistan’s legitimate strategic concerns about threats emanating from Afghan territory.

Considering the abject failure of the Ghani-Abdullah government in stabilizing the country, the international community must intervene to play its constructive role by making Afghans: 1) Call an early presidential election (and end Afghanistan’s farcical hybrid-governance); 2) Carryout broad-based political reconciliation; 3) Call Loya Jirga to institute necessary constitutional and administrative reforms; 4) Stop soliciting regional powers to limit their meddling, and 5) Outline a realistic timeframe for the (honourable) withdrawal of foreign forces from Afghanistan.

A tall order! In his book Afghanistan: Graveyard of Empires–A New History of the Borderland, David Isby concludes: “[I]t is widely said that the main cause of problems is solutions, and each solution identified for Afghanistan has the potential to create further problems.”

The original version of this article has been published by Conference of Defence Associations Institute, Canada.

Adnan Qaiser can be reached at: a.qaiser1@yahoo.com