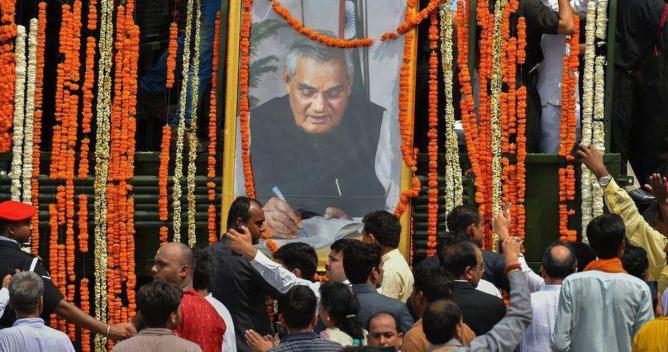 Former PM Atal Behari Vajpayee left to his heavenly abode in utter dismay and anguish of all; not only Indians but all of his well-wishers in all over the world. Why is this so? Was he to remain here in this mortal world forever? It is here the meaning or substance of being Atal Behari Vajpayee unfolds the phenomenon of his unparalleled and unmatched personality and also his unique contribution towards uplift and welfare of the downtrodden and hapless humanity in the whole world which well characterizes his persona as well as psyche in the true sense of progress, prosperity and well-being irrespective of national boundaries.

And his relentless endeavour throughout his life was marked by this powerful spirit of selfless service of all in a most devoted manner and with the sincerest commitment to alleviate the trauma and agony of millions of suffering human populace in a peaceful, rational and progressive way. Though he had been the prime minister of India his vision did not confine him to his country alone; rather his poetic heart always came out for the rescue of the entire humanity from ignorance, backwardness, and poverty in the whole world. It was this approach with which he began his career of social service or service to the nation in his prime youth and became a full-time cadre of Rashtriya Swayamsevak Sangh (RSS) and publically decided to remain a bachelor throughout his life. He joined the Quit India Movement in 1942 launched by Mahatma Gandhi and was imprisoned by the British Government for his political activities.

But that did not discourage his firm resolve and deep penchant to render his whole life for the welfare of others, instead of enjoying all material or worldly pleasures like any young man of his age. That is why he always considered India – the country as a nation – the highest society of virtuous life, perhaps like the great Greek philosopher Aristotle, above and uppermost to any individual, howsoever rich or mighty he or she may be.

The nation is always supreme and also an end in itself but neither in a narrow sense of the term nor the fascist fashion to arouse jingoism or extreme and pernicious nationalism, being popular during inter-war years and afterward too. Despite being a hardcore nationalist his vision always extended beyond national boundaries to reach every individual upon the earth in the true spirit of an ever-cherished ancient Indian ideal of vasudhaive kutumbakam- the entire world is a family on the mother earth. And that, obviously, transforms him from an undisputed national leader to a statesmanlike Mahatma Gandhi, Abraham Lincon or George Washington – one who cares for the welfare of the entire humanity.

Though there are several aspects or numerous dimensions of his personality to narrate and to be described but all these humane traits associated with his personality converge to single him out as a perfect gentleman and humble & sober person, a moderate politician yet always with a sense of humour, a versatile leader and obviously a noble spirit. Today he occupies as a revered patriarch of most of his political party cadres and also of the entire countrymen who mourn at this tragic moment of his demise, cutting across party-lines, caste, creed, religion or region or such otherworldly divisions.

Evidently the gap that has emerged after his departure from the world cannot be fulfilled but his noble deeds and immemorable contributions to the untiring service of the nation as well as the entire humanity will always lighten the path to safe and secure journey like a light house in a huge ocean of ignorance and utter helplessness. That also gives to all of us a noble message to imitate and incorporate in ourselves and to put into practice in our daily and routine course of lives. This is possible as nothing is beyond human endeavour.