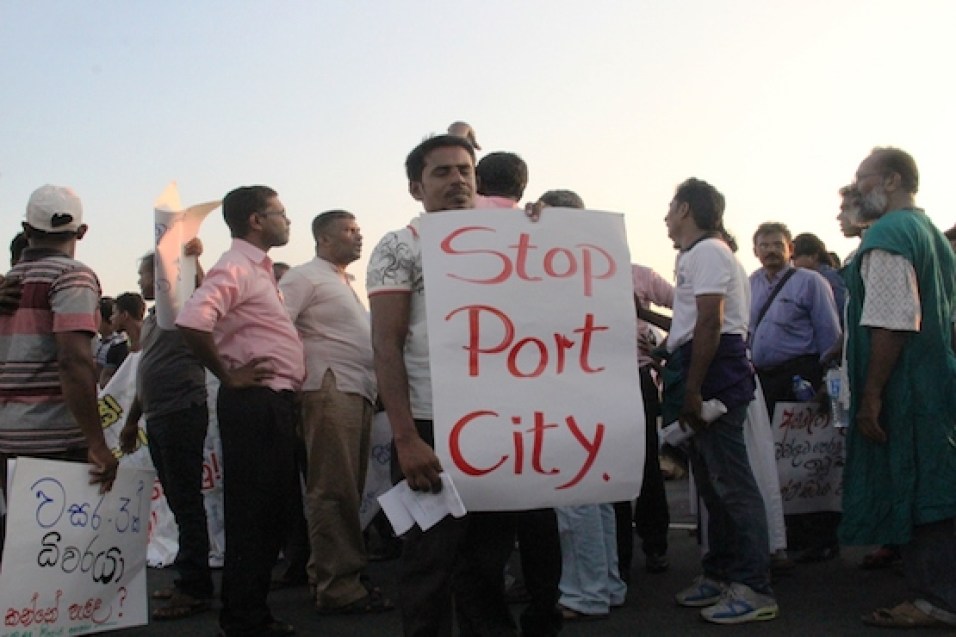 Sri Lankan academics have criticized a lack of environmental protection in the island nation’s massive Chinese-funded Port City project. They gathered on Jan. 27 at the Cardinal Cooray Center in Negombo. (ucanews.com photo)

Sri Lankan academics have warned that insufficient attention is being paid to environmental impacts of the country’s massive Port City development, including links to global warming.

And they fear that rising sea levels will exacerbate local flooding and coastal erosion directly caused by the project’s sand dredging for land reclamation.

Set on 269 hectares adjacent to the main port of capital Colombo, the project’s initial US$1.4 billion construction phase is predicted to attract a further US$13 billion in investment.

In early January, an additional US$1 billion was pledged by the developer, China Harbour Engineering Co., Ltd., for three high-rise buildings to accommodate a financial center.

Port City is expected to have a resident population of 75,000, with 200,000 people commuting there to work via underground tunnels and light rail.

It is seen as part of China’s so-called “One Belt, One Road” master plan linking Asia to Africa, the Middle East and Europe — a modern equivalent of the ancient Silk Road trade route.

While the Sri Lankan government says it will help make the country a global trading and financial hub, opponents claim that the environmental costs are too high.

Hemantha Withanage, an environmental scientist and executive director of the Centre for Environmental Justice, said that blocking water flows out of Colombo’s Beira Lake will worsen flooding.

He was addressing a gathering of priests, nuns, environmentalists, activists and academics on Jan. 27 at the Cardinal Cooray Center in the coastal city of Negombo, 35 kilometers north of Colombo.

The issue of increased salt levels in fresh water sources had also not been properly addressed, Withanage said.

Further, dredging for land reclamation stood to reduce catches of fish, crabs and shrimp for some 15,000 fishermen.

Withanage said there is a lack of evidence to support claims that planned artificial reefs will succeed in encouraging fish to breed.

And he complained that there had been no study of the potential combined effects of the Port City project sand dredging and rising sea levels due to global warming.

Marine zoologist Carmel L. Corea said impacts on the ocean environment, including coral reefs, from using 3.45 million tonnes of granite in the project had not been adequately examined.

The tonnages involved were the equivalent of two large Egyptian pyramids, she said.

The developers say that about 60 percent of land reclamation has so far been carried out and that it was expected to be completed by mid-2019.

Aruna Roshantha, from the All Ceylon Fisheries Union, said fishermen are already experiencing a lower seafood harvest. “We worry about tomorrow,” she said.

Roshantha said sea erosion due to dredging was already visible and three houses had been washed away.

Bishop Asiri Perera of the Sri Lanka Methodist Church said there had been a claim that 80,000 jobs would be created.

“But we know the negative impacts of the project toward our society, economy and environment, so as Christians we should decide what is better,” he said

The project developers reject the core claim of major damage to the marine environment, including loss of fish habitat and the inundation of coastal land.

They cite an environmental impact assessment carried out by a group of experts in various fields and an investigation by the National Aquatic Resource Research and Development Agency.

Megapolis and Western Development Minister Patali Champika Ranawaka said at a Jan. 26 media briefing in Colombo that further environmental and social impact assessments had been completed.