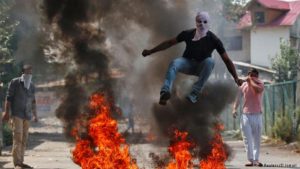 On stopping their smaller toddler of barely six years old, from going out while the stone pelting and clashes were on, the parents got somewhat a strange and a worth shocking reply from him. The boy angrily shouted, “Now when you have two sons (he and his elder brother), even if only one of the two lives, it is ok. One should die for Kashmir”. This scenario reflects that a conflict-ridden upbringing and witnessing a bleeding environment has laid its indelible impact on a vulnerable lot and the conflict socialization/indoctrination is at its peak with its highly disastrous ramifications. Now even students both boys and girls have joined the protests, and the scene is changing altogether.

Conflict as a way of life

Now even small children keep memorizing and enjoying the freedom slogans/songs, and in many families, it is a mere fun to teach such things to kids. My dad says that a new difficult Kashmir is emerging as there was a time in Kashmir when people used to be worrying about the security of their daughters given the gendered norms, but now the scene has changed altogether, the parents must now worry about their sons. On frequent bandhs (Hartals), very small kids fearlessly stop and damage vehicles. Having the backing of elders, even such kids don’t bother to abuse the people using private transport. What does it infer and where will such a deviant socialization lead us in future. The worth pondering is about the kids throwing stones today when they even don’t know the reason to do so, will they hesitate to become guerrillas tomorrow when they are mature and aware of the history. It means a new difficult Kashmir is in the offing. We are gradually landing in a Kashmir where a civilian will be scared of another fellow civilian. A new range of social conflicts will further destroy our social fabric.

At the moment the valley is witnessing many changes, and the reason is purely the situation at the moment. Now public and intellectual circles are somewhat merging, and their thought is not much different. Even intellectuals are flowing with the tide. A new but different majoritarian opinion is shaping up, and everybody is subscribing to it. The new mainstream which was the erstwhile fringe separatism has evolved, and the conventional mainstream has been reduced to a fringe minority, and hardly anybody dares to challenge it including the intellectuals. A fair chunk of this erstwhile mainstream is keeping a low profile or merging into the new dominant group. Now even the former political workers try to show the angry masses that they have not voted or will not in future only to survive amid the new wave.

The ripple effect of every civilian killing or torture or harassment turns long lasting and becomes a strong motivation for the younger lot for anti-social or normally what is called anti-national activities. The recent incident of using a human shield by forces or torture of students in colleges has further deteriorated the trust deficit and added the enemy perception. Now there is a video of everything happening on the ground. Every torture video of civilians is getting viral on social media and adds fuel to the fire. The stability seems almost impossible because both civilians and the forces are hostile against each other. All this has severe implications for peace building, and this shapes an alarming future.

It may not be wrong to say that Kashmir conflict is at its fresh revival and the incessant demand for Azadi (secession) is all time high even in the countryside. The recent lowest poll turnout clearly reflected that people are not happy with elections amid violence and so much of political instability. There are drastic changes in the design of the protests and clashes as well. Earlier the stone pelters used to throw stones and flee. It was thus unplanned and unorganized, but now they fight it face to face and force security forces to fire, and even get killed. A new conflict glory culture has also evolved as in the eyes of the majority youth is to die for the honor and thus die with a dignity. This is the rebirth of a new 1990’s Kashmir-a new difficult Kashmir. The clashes and stone pelting now are more planned, more organized and fearless, and it is certainly a significant challenge to the state and forces equally. On the other side, militants and their videos on social media further energize the protesting youth who clash with forces in the open almost daily now. The protesting youth now don’t see themselves just as militant supporters but find a militant in their selves as well. People especially youth try their best to confront forces during live encounters so that the militant is saved. This is a recent trend and almost unstoppable now. Resultantly, the enemy perception and hatred is all time high and People don’t expect any healing touch or the revocation of AF (JK) SPA in Jammu and Kashmir from the government. The fact is that people believe that the government has failed to grasp the volatile Kashmir dynamics and more often their irresponsible statements have further deteriorated and aggravated the situation. Instead of seriously pondering over such a grave situation on the ground, the state always resorts to short-term tactics like internet or communication blockade in the name of law and order. Even among the chunk of the society that usually does not participate in anything like protests or polling or political or separatist activities, hopelessness is found-hopelessness with the system.

Need for an immediate Intervention

As conflict permeates through the young vulnerable minds, the urge for separatism and even linking the political issue with Islam (Azadi barai Islam) has become the new reality as reflected in wall graffiti’s across Kashmir. The wisdom demands acting wisely and displays of vision for a peaceful Kashmir on a war footing. The Centre should start delivering much hyped Insaniyat (humanity) and Jamhooriyat (democracy) for the sake of true Kashmiriyat in the State of Jammu and Kashmir. Instead of thinking more about the procedures, the authorities must sincerely worry for the peace building in Kashmir especially when the summer is about to set in. Be that election or other activities, peace and peaceful environment must be the prerequisite and continuing with such routine exercises amid violence and chaos defeats the goal. A close relative who was on election duty in Budgam area recently narrated a horrible story. The situation in his election booth turned such violent that he even bade the last goodbye over the phone to his family members seeing the massive attack on a school which happened to be his polling station. The employees and everybody else were crying loud inside the school which was bombarded by huge stones from a hillock. Democracy, violence, lawlessness and such open crimes cannot go together in such an unaccounted and inexperienced way. Those in power should realize it and start negotiating with angry youth as earlier as possible lest the new difficult Kashmir will turn to an impossible Kashmir. Kashmir needs some strong leadership at Helms to see the change on the ground.

The scene is entirely different and chaotic on the ground this time. Now a civilian is scared of another civilian and police personnel think twice before visiting their families. Political workers feel insecure, and killings and torture continue as routine. Everyone seems aghast, and every Kashmiri is under stress; the stress posed by the anomic circumstances and daily happenings. The atmosphere at the moment only tells that yet another summer may be lost to one violent uprising. The Centre has to take sincere initiatives and start a dialogue to build peace in Kashmir.