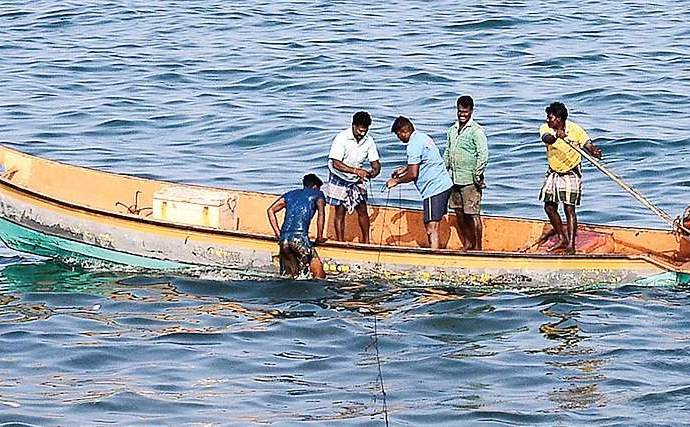 Even as Indian Prime Minister Narendra Modi announced an investment of Rs 12,000 crore to upgrade eight state highways to National Highways in his home state Gujarat as part of efforts to boost infrastructure development and job generation in the state, the Sri Lankan government reportedly shot dead a 22-year-old Tamil Indian fisherman was on Monday while he was fishing in a boat near Rameswaram Dhanushkodi, a short distance off Katchatheevu islet.

Fisherman, K. Britjo, was killed. Another who was injured was warded in a hospital in Tamil Nadu. The tragedy has ignited tensions in the state, but Colombo insists its Navy was not involved. Sri Lanka says Indians fish on Lankan waters and six fishermen from Thangachimadam in Ramanathapuram district were fishing near the Katchatheevu isle.

Interestingly, the Indian government is yet to properly react to this Sri Lankan criminal arrogance; ignoring the fact SL killed an Indian on Indian sea.

Sri Lanka has declined to take responsibility for the murder of the Tamil fisherman, but did say that an initial probe report has ruled out its navy’s involvement in the shooting of an Indian fisherman, an issue raised by India with Sri Lanka’s prime minister.

In New Delhi, External Affairs Ministry said as a routine matter, “Government of India is deeply concerned at the killing of an Indian fisherman. Our High Commissioner to Sri Lanka has taken up the matter with the Prime Minister of Sri Lanka (Ranil Wickremesinghe). The Sri Lankan navy has promised a full and thorough investigation.”

Sri Lankan Navy Spokesman Lieutenant Commander Chaminda Walakuluge in Colombo categorically denied any involvement of the navy in the fisherman’s killing, saying the navy does not open fire at poaching fishermen and only arrests them. In a statement, Foreign Ministry of Sri Lanka said, “the initial investigations had indicated that the Sri Lankan navy was not involved.”

“Irrespective of the parties involved, if in fact a shooting has taken place, it is a matter of grave concern and all possible action will be taken in cooperation with the relevant Indian authorities to investigate into this incident utilizing GPS technology as well,” it added.

The statement expressed the government’s deep concern, “about the alleged and the connected loss of life of one fisherman and injury caused to another.” It said Sri Lanka is firm in its commitment to ensuring that “all government agencies treat all Indian fishermen in a humane manner at all times”.

The statement followed fisheries minister Amaraweera’s letter to the defence authorities to investigate the matter. Amaraweera said he had spoken with Indian High Commissioner in Colombo, Taranjith Singh Sandhu and assured that Sri Lanka was keen not to allow the good relations between the two countries hampered by any incident.

Indian fisherman Bridgo along with others were fishing near the Katchatheevu islet when the Sri Lankan naval personnel arrived at the spot and opened fire, fisheries department officials in Tamil Nadu had said. Bridgo was shot in the neck and died on the spot and another fisherman, Saravanan (22), suffered leg injuries in the firing. Other fishermen who went along with them escaped unhurt and returned to the shore.

Katchatheevu is located in the narrow Palk Straits dividing India and Sri Lanka. The sea near the island is rich in marine life, leading to frequent clashes between Indian and Sri Lankan fishermen.

Hundreds of fishermen launched a protest at Rameswaram in Tamil Nadu against the killing. Another fisherman was injured. The Sri Lankan Navy promised “a full and thorough probe” into the incident after India took up the matter at the highest level, informed sources said. India voiced deep concern over the killing. Indian High Commissioner Taranjit Singh Sandhu took up the matter with Sri Lankan Prime Minister Ranil Wickremesinghe, the sources said.

The killing has triggered protests in Tamil Nadu, where Chief Minister Edappadi K Palaniswami condemned the incident and announced a compensation of Rs five lakh for the victim’s family. Palaniswami said the state government has been repeatedly taking up with Centre the various instances of arrest and “intimidation” of fishermen by the Lankan Navy, besides seizure of their boats and pressed for a lasting solution.

Tamil Nadu Chief Minister K. Palaniswami announced a compensation of Rs 5 lakh to the family of the dead fisherman, K. Britso, and a compensation of Rs 1 lakh for the injured fisherman. The attack comes a day after Palaniswami wrote to Prime Minister Narendra Modi seeking the release of 85 fishermen and their 128 boats now in Sri Lankan custody. PMK leader Anbumani Ramadoss on Tuesday condemned the killing and said New Delhi should stop terming Sri Lanka as a friendly nation.

“They were first attacked by the Sri Lankan Navy with grenades and then were shot at,” Ramadoss said in Chennai. He said attacks on the Indian fishermen by the Sri Lankan Navy have been happening for the past 30 years, leaving more than 800 fishermen dead. Ramadoss said India and Sri Lanka had agreed that fishermen crossing the maritime boundary by mistake should not be attacked but handled in a humane manner. “It seems Sri Lanka is not willing to abide by any agreement,” he said. He said the Tamil Nadu government should put pressure on the Indian and Sri Lankan governments to arrest the Navy personnel who killed the Indian.

Hundreds of fishermen also staged a demonstration in Rameswaram in Tamil Nadu.

Sri Lanka has taken the silence on the part of Indian government for granted as being implicit support for Lankan atrocities on Tamil fishermen. Apparently, Sri Lanka is exploiting Indian unofficial policy of “no war with neighbors except Pakistan” to its own advantage by harming the interests of Tamil fishermen. Since Indian government also had attacked Tamil fishermen, killing some of them on sea during the anti-nuke struggle of people of Kudankulam in Tamil Nadu, Sri also thinks it also enjoys the same privilege of attacking Tamils whom the majority Singhalese views as their enemy.

Tamils see some apparent secret deal between Indian and Lankan regimes to deal sternly with Tamils and therefore, Indian government allows all atrocities by Lankan military on Indian Tamils. In a civil war earlier, Lankan military committed crimes against humanity by committing genocides of Tamils as part of their goal of holocaust of Tamil population in Lankan Island.

The new regime in Colombo under Sirisena had declared loudly that it would go for reconciliation but now it has presided over the murder of a Tamil fisherman in Tamil Nadu, breaking all provisions of intentional law.

The Sri Lankan regime has made its intent unambiguously clear to India. With the genocides of Lankan Tamils, attacks on Tamil fishermen on sea repeatedly that it can deal with Tamil fishermen the way they feel. They seem to leave two options to India: either recapture Katchatheevu or just ask Indian fishermen to stop fishing in their traditional zones. In this regard the action of Russia in annexing Crimea from Ukraine would serve as model action. Crimea was a part of Russia but was gifted to Ukraine during the Soviet rein by the Soviet President Khrushchev- a Ukrainian- as part of territorial integration of Soviet state. Now it is clear Katchatheevu should not have been gifted to Sri Lanka – that was a strategic mistake of India — as Sri Lanka declines to allow Tamil fishermen in their traditional zones as per the understanding between India and Sri Lanka and that is unfair to say the least.