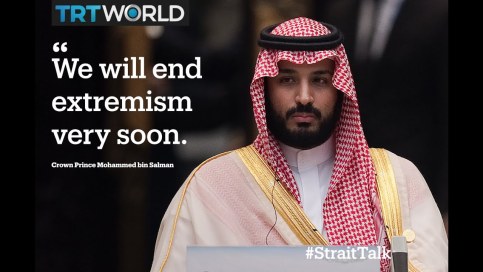 A Saudi draft law could constitute a first indication that Crown Prince Mohammed bin Salman’s vow to return the kingdom to a moderate form of Islam will some reshaping of the kingdom’s global funding for Sunni Muslim ultra-conservative educational and cultural facilities as well as militants.

The law, if adopted, would at the very least tighten rules governing the raising of funds in the kingdom that often flowed to militants in campaigns of which it was not always clear whether the government had tacitly approved them. Tighter rules would make it more difficult for the government to put a distance between itself and militant fundraising.

To be sure, analysts have long assumed that fundraising, particularly with the help of members of Saudi Arabia’s government-aligned, ultra-conservative religious establishment, could not occur without the knowledge of a regime that maintains tight political control.

It remains unclear how tighter fundraising rules would affect Saudi Arabia’s ideological war with Iran. The kingdom has for decades invested billions of dollars in globally propagating Sunni Muslim ultra-conservatism as an antidote to the Islamic republic’s revolutionary zeal.

The bulk of the funds flowed to non-violent groups, but in some cases also to ones that attacked Shiites and/or Iranian targets. That has largely not changed since the rise in 2015 of King Salman and his powerful son, Prince Mohammed.

Saudi Arabia, in the latest suggestion that tightened fundraising may target militancy rather than supremacist, sectarian and intolerant strands of ultra-conservatism, plans to open a Salafi missionary centre in the Yemeni province of Al Mahrah on the border with Oman and the kingdom.

The plan harks back to the creation of an anti-Shiite Salafi mission near the Houthi stronghold of Saada that sparked a military confrontation in 2011 with the Yemeni government, one of several wars in the region. The centre was closed in 2014 as part of an agreement to end the fighting.

Prince Mohammed’s use of ultra-conservative Sunni Islam in his controversial war with the Houthis was also evident in the appointment as governor of Saada of Hadi Tirshan al-Wa’ili, a member of a tribe hostile to the Shiite sect, and a follower of Saudi-backed Islamic scholar Uthman Mujalli. Mr. Mujalli reportedly serves as an advisor to Abd Rabbu Mansour Hadi, the exiled, Kingdom-backed Yemeni president.

Writing in Al-Monitor, Brookings fellow and former CIA official Bruce Riedel argued that continued government support of ultra-conservatism served not only Saudi Arabia’s regional ambitions but also as a pacifier for a religious establishment that, despite public endorsement of Prince Mohammed’s social reforms, is deeply uncomfortable with changes like a loosening of restrictions on women and greater entertainment opportunities.

“After three years on the throne, King Salman bin Abdul-Aziz Al Saud and his son Crown Prince Mohammed bin Salman are pursuing the most aggressively sectarian and anti-Iran policy in modern Saudi history. The Wahhabi clerical establishment is an enthusiastic partner, which is good internal politics for the Royals… It’s a way to keep the mainstream Wahhabi establishment and the Al Sheikhs content that their core interests are safe,” Mr. Riedel said, referring to the descendants of 18th century preacher Mohammed ibn Abdul Wahhab, who constitute the ruling Al Sauds’ religious counterpart.

If adopted, fundraisers would have to be authorized before launching a campaign. Failure to obtain authorization would result in a jail sentence of up to two years and, in the case of foreigners, deportation. Fundraisers would only be allowed to accept donations from Saudi nationals and institutions.

The stipulation that the fundraisers themselves too would have to be Saudi nationals would effectively block foreign individuals and groups from Pakistan and elsewhere that have been supported for decades by Saudi Arabia from independently seeking financial support in the kingdom.

A litmus test of the impact of the law, once adopted, will be how Saudi Arabia deals with people like Pakistani cleric Maulana Ali Muhammad Abu Turab. Mr. Abu Turab was identified last May as a specially designated terrorist by the US Treasury at the very moment that he was in the kingdom to raise funds for his militant madrassas or religious seminaries that dot the border between the Pakistani province of Balochistan and Afghanistan.

A member of Pakistan’s Council of Islamic Ideology that oversees whether legislation is in line with Islamic law, Mr. Abu Turab is a leader of Ahl-i-Hadith, a Pakistani Wahhabi group supported by the kingdom for decades, and a board member of Pakistan’s Saudi-backed Paigham TV.

He also heads the Saudi-funded Movement for the Protection of the Two Holy Cities (Tehrike Tahafaz Haramain Sharifain) whose secretary general Maulana Fazlur Rehman Khalil has also been designated by the Treasury.

Similarly, Pakistani militants reported over the last 18 months that funds from Saudi Arabia were pouring into militant madrassas in Balochistan against the backdrop of indications that the kingdom may want to try to destabilize Iran by stirring unrest among the Islamic republic’s ethnic minorities, including the Baloch.

Saudi efforts to more tightly control fundraising may also serve Prince Mohammed’s unconventional effort to fill depleted government coffers at a time of economic recession. Prince Mohammed launched in November what amounted to a power and asset grab packaged as an anti-corruption campaign after the kingdom’s elite had failed to respond to a request to make patriotic contributions to help shore up government finances.

Saudi Finance Minister Mohammed Al-Jadaan said last week that authorities had received a total of roughly $100 billion in out-of-court settlements from around 350 people accused in the purge.

As a result, tougher fundraising rules could potentially mean that donations would increasingly favour domestic rather than foreign causes.

It is, however, with no indication that Saudi Arabia is willing to reduce tension with Iran, unlikely that the kingdom would halt funding of its ideological war with the Islamic republic. Nor is there an apparent Islamically-packaged alternative to the propagation of ultra-conservatism as its primary soft power tool.

In short, tighter fundraising rules are certain to enhance control of the causes for which money is solicited and who will be allowed to raise funds. It may well also result in support for advocacy of interfaith dialogue and greater tolerance as recently propagated by the World Muslim League, a government-controlled non-governmental vehicle that for decades funded the global spread of ultra-conservatism. The rules, however, are unlikely to mean an end to funding of ultra-conservatism and sectarianism that serves Saudi Arabia’s existential battle with Iran.