As Riyadh and Beijing nurture grandiose plans for military bases, New Delhi fears the archipelago could become a breeding ground for the terrorist group 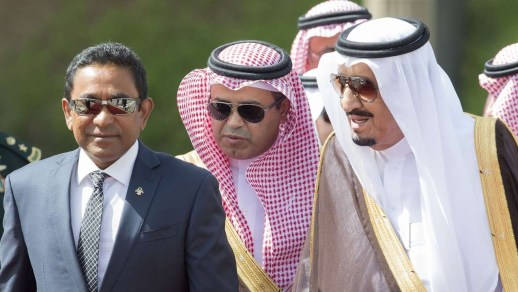 Saudi King Salman’s stop in the Maldives on his month-long tour of Asia brings into focus how this tiny archipelago – best known for high-end tourism and an existential battle against climate change – has emerged as a key player in a regional struggle for influence.

Both Riyadh and Beijing are currying favour with the strategically located 820km-long chain of Indian Ocean atolls, in efforts analysts believe are aimed at gaining concessions for military bases.

China sees the islands as a node in its “string of pearls” – a row of ports on key trade and oil routes linking the Middle Kingdom to the Middle East – while for Saudi Arabia, the atolls have the added advantage of lying a straight three-hour shot from the coast of regional rival and arch-foe, Iran.

The possible building of Chinese and/or Saudi military bases here would also complement the independent development of both nations’ military outposts in Djibouti, an East African nation on a key energy export route at the mouth of the Red Sea. 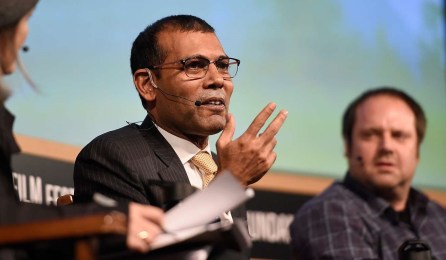 Exiled former president of the Maldives, Mohamed Nasheed, who lost power in 2012 following protests over rising commodity prices and the nation’s poor economy, has no doubt regarding Chinese and Saudi intentions.

They “want to have a base in the Maldives that would safeguard trade routes – their oil routes – to their new markets. To have strategic installations, infrastructure,” Climate Change News quoted Nasheed as saying.

The heightened Saudi and Chinese interest in the Maldives comes against a backdrop of increased military cooperation between the two nations.

King Salman’s visit also comes as the kingdom negotiates the US$10 billion development, if not wholesale acquisition, of Faafu, 19 low-lying islands 120km south of the Maldivian capital of Male. That project would involve building seaports, airports, high-end housing and resorts and the creation of special economic zones.

Legal experts suggest Saudi Arabia will probably be granted a freehold on the land if 70 per cent of the project is executed on reclaimed ground. 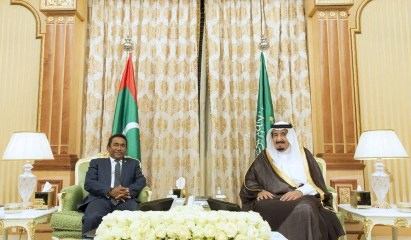 Transparency Maldives, the local branch of Transparency International, has called on the government to publish its plans for Faafu amid protests against the proposed Saudi investment and allegations of widespread corruption.

Critics claim the Saudis have gone out of their way to silence opponents by greasing their palms. In one incident, journalists reporting on the potential deal were handed cash-filled envelopes during an event at the Saudi embassy in Male.

Saudi Arabia, to lay the ground for the investment, has in recent years funded religious institutions in the Maldives and offered scholarships for students wanting to pursue religious studies at the kingdom’s ultra-conservative universities in the holy cities of Mecca and Medina. The funding has pushed the Maldives, a popular high-end tourist destination, towards greater intolerance and public piety. Public partying, mixed dancing and Western beach garb have become acceptable only within expensive tourist resorts.

The Saudis “have had a good run of propagating their world view to the people of the Maldives and they’ve done that for the last three decades. They’ve now, I think, come to the view that they have enough sympathy to get a foothold,” Nasheed said.

Riyadh sees its soft power in the Maldives as a way of convincing China it is Saudi Arabia – and not its regional rival, Iran – that is the key link in Beijing’s “One Belt, One Road” initiative to link Eurasia to the Middle Kingdom through Chinese-funded infrastructure. 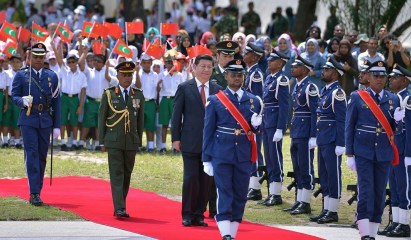 Chinese President Xi Jinping at his welcoming ceremony at the Republic Square in Male in 2014. Photo: AFP

King Salman’s visit follows a 2014 trip to the Maldives by Chinese President Xi Jinping (習近平) during which Beijing announced the construction of a US$210 million Friendship Bridge that would connect Male’s eastern edge to the western corner of the island of Hulhule, where the international airport is located.

China also agreed to build a new airport runway as well as a port in Laamu, an atoll south of Faafu. That port would be a “pearl” in China’s string alongside those it has already established in Djibouti, Pakistan’s Gwadar, Sri Lanka’s Hambantota and its US$10.7 billion development of an industrial city next to the Omani port of Duqm.

But while recent focus has been on the military bases Beijing and Riyadh may want to build, another regional player, New Delhi, fears the archipelago could become a base of a very different kind.

Indian intelligence sources claim hundreds of Maldivians have joined the ranks of Islamic State in Syria – raising the worrying prospect of a hub for the terror group just off the sub-continental mainland.

Nasheed, the former president who now lives in London, has long railed that climate change will lead to the Maldives sinking and vanishing into the Indian Ocean. That concern has been replaced by worries that the atolls will become mired in mounting regional rivalry and stymied by ultra-conservatism that ultimately could threaten grandiose Saudi and Chinese plans. ■

Dr. James M. Dorsey is a senior fellow at the S. Rajaratnam School of International Studies, co-director of the University of Würzburg’s Institute for Fan Culture, and the author of The Turbulent World of Middle East Soccer blog, a book with the same title, Comparative Political Transitions between Southeast Asia and the Middle East and North Africa, co-authored with Dr. Teresita Cruz-Del Rosario and two forthcoming books, Shifting Sands, Essays on Sports and Politics in the Middle East and North Africa as well as Creating Frankenstein: The Saudi Export of Ultra-conservatism.