What’s the UN doing to Stopping Genocide of the Rohingyas of Myanmar? 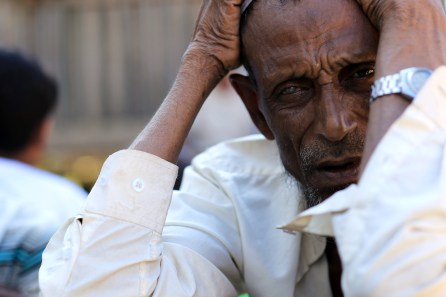 One of the sinister methods employed to justify genocide has been to deny the history of the targeted victims. And that is what the criminal Buddhists within the apartheid state of Myanmar has been doing for nearly 70 years since earning independence from Britain on January 4, 1948. Instead of carrying out their hideous elimination process in one shot within a short period, however, Buddhist Myanmar has been doing it slowly stepwise as part of a very sinister national project with full cooperation from top to bottom within the Buddhist community.

They termed Rohingyas as outsiders and officially robbed their citizenship thereby effectively making them stateless in the land of their ancestors, a significant policy that would create the official justification for ongoing violence and expulsion of the targeted minority out of the country. The rape of women and wanton killing of innocent Rohingyas, let alone relentless persecution were employed as tactics to create an environment for the forced exodus. The Rohingyas were denied each of the 30 rights enshrined in the Universal of Declaration of Human Rights.

To erase the Rohingya history, the names of historical landmarks were changed: Arakan was named the Rakhine state, and its capital city Akyab changed to Sittwe. Muslim monuments – mosques, shrines, and madrassas that once dotted the Arakan coastal line was systematically gutted and destroyed.

Sadly, even such destructive measures were not considered enough by the Buddhist genocidal perpetrators; they raped, killed and terrorized people; they pillaged, burned and demolished Rohingya villages and towns.

History books were changed to de-link the Rohingya from the soil of Arakan. And worse still, to mobilize general Buddhist public against Rohingyas – who are mostly Muslims (and some Hindus) – the latter were dehumanized through carefully crafted propaganda. The victims were depicted as ‘vermin,’ ‘cockroaches,’ ‘snakes,’ etc. to create the moral justification for their total extinction or annihilation. Pseudo-scholars and academics with fascist leanings – like Aye Kyaw (now dead who taught in a NY university) and Aye Chan (who teaches at Kanda University of International Studies in Japan) – stirred up the Rakhine Buddhists and others within Myanmar to distort history and delegitimize the Rohingya people, thanks to Government incentives and supports that they received. The xenophobic Buddhist monks played their hate cards in ways that the world has not seen in decades. With active support from the government, its military and police, plus Buddhist politicians – all hardcore racists and bigots – the genocidal pogroms unleashed against the targeted Rohingya came easy and were perceived as justifiable by the Buddhist public.

In genocidal pogroms of 1978 and 1991-92, more than half a million of Rohingyas were pushed out to Bangladesh when not everyone was later welcomes back. In the latest 2017 pogrom alone, some 647,000 (and growing) Rohingyas have been pushed out. Thus, the Rohingya minority that once comprised roughly 45-47% of the population (per estimates made by area experts) before the current episodes (dating back to June 2012) has been reduced drastically to perhaps less than half a million living inside the Apartheid Myanmar. According to credible international agencies and medical sources, at least 6,700 Rohingyas were killed, and tens of thousands of girls and women were raped by Buddhists of Myanmar – military and fascist Rakhines. Hundreds of Rohingya villages have also been destroyed by them to make return of the refugees impossible.

Sittwe, which used to be a mixed-ethnic city has no resemblance to its rich past heritage of co-existence. Rohingyas are interned in concentration camps with no access to the outside world. The Jama mosque now stands disused and moldering, behind barbed wire. Its 89-year-old imam is interned. All the Muslim owned shops have been grabbed by Rakhines, who now falsely claim that Rohingyas never owned any shop in the bazaar. Sittwe University, which used to enroll hundreds of Muslim students, now only teaches around 30 Rohingya, all of whom are in a distance-learning program.

Buthidaung, close to the border with Bangladesh, the traditional home of many Rohingyas no longer has anyone of their kind representing them in anything in the township where they comprised 90% population. It is now represented by a minority Rakhine, a hostile MP, who wants to push out the remainder Rohingyas to Bangladesh.

Rangoon (now called Yangon) whose majority population during the British era, esp. the 1930s, were Muslims and Hindus – racially Indian, has now a very small community that feels threatened, unsafe and insecure of their very existence. In the early decades of Burma’s independence, a Rohingya elite thrived in Rangoon. Rangoon University, the country’s top institution, had enough Rohingya students to form their union. One of the cabinets of U Nu, the country’s first post-independence leader, included a health minister who identified himself as an Arakanese Muslim.
Even under Ne Win, the general, Burmese national radio aired broadcasts in the Rohingya language. Rohingya, women among them, were represented in Parliament.

Now, under Suu Kyi, everything is lost, and the days of hated dictator Ne Win, who robbed them of their citizenship, are viewed as better days!

That is the sad reality of the Rohingyas and other Muslims and Hindus still living inside Suu Kyi’s den of intolerance and hatred called Myanmar.

In a report released in October, the Office of the United Nations High Commissioner for Human Rights said that Myanmar’s security forces had worked to “effectively erase all signs of memorable landmarks in the geography of the Rohingya landscape and memory in such a way that a return to their lands would yield nothing but a desolate and unrecognizable terrain.”
The United Nations report also said that the crackdown in Rakhine had “targeted teachers, the cultural and religious leadership, and other people of influence in the Rohingya community to diminish Rohingya history, culture, and knowledge.”

What is so grotesque is that Myanmar is one of the signatories of the 1948 Genocide Convention, which vowed to prevent genocide. And yet, it is the worst violator of our time!
The Convention defines genocide as “acts committed with intent to destroy, in whole or in part, a national, ethnical, racial, or religious group.” This includes not only killing members of the group but also causing serious bodily or mental harm and imposing measures intended to prevent births within the group.

As rightly noted in the 70th convention on the International Day of Commemoration and Dignity of the Victims of the Crime of Genocide by the UN Secretary-General Antonio Guterres, “Genocide does not happen by accident; it is deliberate, with warning signs and precursors.” “Often it is the culmination of years of exclusion, denial of human rights and other wrongs. Since genocide can take place in times of war and in times of peace, we must be ever-vigilant,” he continued.

The Secretary-General’s Special Advisor on the Prevention of Genocide Adama Dieng echoed similar sentiments, stating: “It is our inaction, our ineffectiveness in addressing the warning signs, which allows it to become a reality. A reality where people are dehumanized and persecuted for who they are, or who they represent. A reality of great suffering, cruelty, and of inhumane acts that have at the basis unacceptable motivations.”

Despite the comprehensive definition of genocide in the Convention, genocide has recurred multiple times, Guterres said. “We are still reacting rather than preventing, and acting only when it is often too late. We must do more to respond early and keep violence from escalating,” he said.

After a year of investigation, the organization Fortify Rights and the United States Holocaust Memorial Museum said that there is “mounting” evidence that points to genocide against Rohingya Muslims in Myanmar with Burmese Army soldiers, police, and civilians as the major perpetrators.

“The Rohingya have suffered attacks and systematic violations for decades, and the international community must not fail them now when their very existence in Myanmar is threatened,” said Cameron Hudson from the U.S. Holocaust Memorial Museum. “Without urgent action, there’s a high risk of more mass atrocities,” he continued.

More than half of Myanmar’s one million Rohingya have fled the country since genocidal violence reignited in August. It has been the largest and fastest flow of destitute people across a border since the 1994 Rwandan Genocide, the International Organization for Migration (IOM) said. “There was nothing left. People were shot in the chest, stomach, legs, face, head, everywhere.” Eyewitness testimony revealed that Rohingya civilians were burned alive, women and girls raped, and men and boys arrested en masse.

Other equally credible international agencies have also come forward to claim that the crisis in Myanmar may constitute genocide such as UN High Commissioner for Human Rights Zeid Ra’ad al-Hussein and the British parliament’s Foreign Affairs Committee. “Considering Rohingyas’ self-identify as a distinct ethnic group with their own language and culture – and [that they] are also deemed by the perpetrators themselves as belonging to a different ethnic, national, racial or religious group – given all of this, can anyone rule out that elements of genocide may be present?” al-Hussein asked.

Though the UN Human Rights Council recently condemned the systematic and gross violations of human rights in Myanmar, the Security Council has failed to act on the crisis. China, shamelessly, with its history of on-going horrendous crimes perpetrated against the indigenous Uighurs in Xinjiang (East Turkestan), has been responsible for the UNSC inaction on the Rohingya crisis.

In spite of serious cases of genocide in various parts of our globe, the first time that the 1948 law was enforced occurred on 2 September 1998 when the International Criminal Tribunal for Rwanda found Jean-Paul Akayesu, the former mayor of a small town in Rwanda, guilty of nine counts of genocide. Two days later, Jean Kambanda became the first head of government to be convicted of genocide.

The first state to be found in breach of the Genocide convention was Serbia. In the Bosnia and Herzegovina v. Serbia and Montenegro case, the International Court of Justice presented its judgment on 26 February 2007. It cleared Serbia of direct involvement in genocide during the Bosnian war, but ruled that Belgrade did breach international law by failing to prevent the 1995 Srebrenica genocide, and for failing to try or transfer the persons accused of genocide to the ICTY, in order to comply with its obligations under Articles I and VI of the Genocide Convention, in particular in respect of General Ratko Mladic. On 22 November 2017, Ratko was sentenced to life in prison by the ICTY for ten charges, one of genocide, five of crimes against humanity and four of violations of the laws or customs of war.

As the UN appeals for the remaining 45 member states to ratify the Genocide Convention, my question is what about states like Myanmar who are already party to the document? Will the UNSC take action against war criminals in Myanmar only after the last Rohingya is eliminated from their ancestral home?

Concerned UN and world leaders ought to know that simply increasing the number of signatories for the 1948 Convention beyond 149 members is not going to prevent genocide. The Convention requires all states to take action to prevent and punish genocide. Not only Myanmar, but the entire international community has failed to protect Rohingya civilians from genocidal atrocities.
Just complaining about the genocidal horrors and increasing membership to ratify the Convention on the Prevention and Punishment of Genocide will not help. The civilized world simply cannot let savages to run the show and get away with their monumental crimes against humanity. If we are to avert a humanitarian disaster like the Rohingya crisis, this horror will have to be matched by stern action on the part of the international community. That means, trial and punishing the monsters.