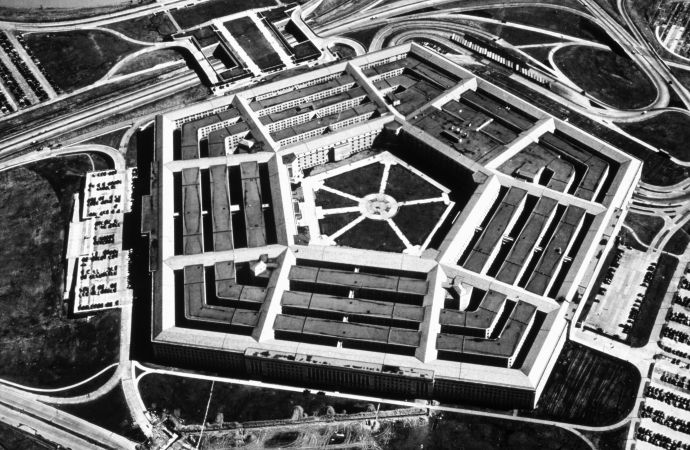 In a paper written for the U.S. Institute of Peace, Noah Coburn, a professor at Skidmore College, noted that the United States and others in the NATO coalition trying to bring stability to Afghanistan have relied on warlords and powerbrokers that actually benefit from instability. As they skim off wealth because of the corrupt Karzai government and the billions of dollars poured virtually indiscriminately into the country as military and economic aid, they’ve made an industry of instability; their major asset is that instability.

So why, Coburn asked, would they try to get rid of it?
Ironically, I read the paper awaiting a discussion at the institute’s new, $50 million building in DC on the future of Afghanistan. I was in an auditorium packed to standing room only by about 400 spectators, diplomats active and retired, academics, journalists, business people, congressional aides, denizens of the numerous NGOs based in DC and military figures, some in formal uniform, shiny with ribbons, buttons and bows.

They, too, have an interest in the instability of Afghanistan and by extension, Pakistan. They have helped make Afghanistan and Pakistan, both once merely the flavors of the month to the foreign affairs set, a veritable cottage industry in Washington DC.

Where would all these people go without turmoil in that region? More significantly, is it even more difficult for the United States to let go of these countries or otherwise fashion rational policy because of a self interest in their persistent instability on the part of so many in its establishment? Why would they try to get rid of it?

Here’s an example of the industry at work:

* At exactly the same time experts were discussing the future of Afghanistan and Pakistan at the Institute of Peace, across town at the Woodrow Wilson Center for Scholars, another eminent DC think tank, Zahid Hussain, a Pakistani journalist/writer and Wilson Center Pakistan scholar, was examining the Pakistan-U.S. relationship in the context of Afghanistan.

* The following day, Sen. John McCain discussed U.S. policy toward Afghanistan at the Carnegie Endowment for International Peace, another eminent DC think tank (lunch for the audience was available 30 minutes before he spoke). He spoke strongly in favor of promoting a strategic partnership with Afghanistan.

* Carnegie followed up its discussion with an update from the field in Afghanistan a few days later by Marine Major General John Toolan, just back from Helmand province.

About halfway in his presentation about the good works under his command in the Helmand Valley, Toolan paused to recollect on the original mission that brought American forces to that country: to prevent terrorists from setting up bases from which to attack the United States.
“So far,” he said, “it’s been relatively successful.”
Since that assessment was in line with what Leon Panetta, now the Defense Secretary, and Admiral Mike Mullen, then chairman of the Joint Chiefs of Staff, have said, that means it’s time to think about declaring victory and getting out of Afghanistan, perhaps even before President Obama’s deadline of the end of 2014, right?
Wrong.

Time and time again during these discussions in Washington DC about Afghanistan, speakers repeat, as if a mantra, that the ultimate fate of the country is in the hands of the Afghans themselves.

Despite this sentiment, in virtually none of these discussions is there an examination of the proposition that the U.S. mission has virtually ended, or of the consequences other than chaos if U.S. and NATO forces simply departed and left the Afghans to settle their own affairs.

General Toolan’s remarks foreshadowed the NATO summit in Chicago and Obama’s May flight to Kabul to sign with Afghan President Hamid Karzai a strategic partnership agreement that apparently commits the United States, despite a planned withdrawal of troops in 2014, to another decade of involvement in an Afghanistan, a country with a future that, if not unknown, is uncertain.

Toolan remarked quite reasonably that the United States needed to support the Afghan national army with medical services and, of course, intelligence, as if that force doesn’t know its own country and languages (but doesn’t have spotting drones). Somewhat more ominously, the general added one more support service, special ops. In his view, the war will continue after 2014 — and American special operations troops will be there fighting it.
And as the war continues (with a Tet-like assault in Kabul, a few hours after Obama flew from the capital and a day or so after two Brookings Institution scholars in a New York Times op-ed piece extolled the improved security situation there), the talk in DC continues, adding a sense of fantasy to the Washington view of the war in Afghanistan.

The discussion at the Institute of Peace was among a group typical of the high level of expertise available in DC.

The moderator was Stephen Hadley, who stood by as George W. Bush blundered in Iraq for eight years, including four years as a deputy to Condoleezza Rice, and as a presidential advisor on national security matters, (to Hadley’s credit, he tried once to resign but Bush wouldn’t let him).

The other American on the panel was Ambassador Marc Grossman, who came out of retirement to become special envoy to Afghanistan and Pakistan after the death last year of Richard Holbrooke, whose bluntness is now sorely missed.

Regional expertise came from Ahmed Rashid, the Pakistani journalist who probably knows as much about the Taliban as Mullah Omar, the so-called Taliban spiritual leader. Afghanistan was represented by Nilofar Sahki, founder of the Women’s Activities and Social Security Association (WASSA) and otherwise identified as a peace-building analyst on Afghan affairs, and Muhammed Masoom Stanekzai, an Afghan presidential adviser and secretariat head of the Afghan government’s High Peace Council.

Missing was a view point from that elephant in the room, the Taliban, difficult as it might be to ascertain. More about that subject later.

, like so many other similar panels in DC, was wrapped in an aura of unreality, almost fantasy, as panelists discussed the scheduled 2014 elections in Afghanistan as if they would usher in a new and presumably more improved government, and spoke of reconciliation as if it actually might happen.

“How to get this process back on track,” said Hadley, with no sign of reservations about the process or whether it ever had been on track. He did say, with a gesture toward reality: “it will take a long time for a peaceful, stable Afghanistan.”

There was almost no reference to the failure after failure of the past ten years, the
wasted lives of Afghans, Americans and others, the disgust of American public opinion about war in Afghanistan and the money that has gone down what appears to be a bottomless pit. No one looked at a what-if proposition — that the United States might leave Afghanistan NOW.

Instead, Ambassador Grossman supplied a chilling moment, (this was before the Obama flight), reiterating General Toolan’s sentiments by saying that after the 2014 date for the departure of U.S. forces “there will be an American presence in Afghanistan.” He added: “We have to continue on.”

He said also that the United States will try to end the war before its scheduled departure (exactly how was unspecified, although he said, “otherwise, without an end, total failure”) and the role of the United States was “to open the door to conversation among Afghans” to reconcile.

No one considered the possibility that if the United States left Afghanistan now, the Afghans for the sake of their survival would begin talking among themselves (of course, they just might continue killing one another, but at least not without Americans as targets).

The Afghan panelists were muted, possibly respectful of their surroundings. Ms. Sahki spoke of the optimism of Afghans when the Taliban was routed in December 2001. “That level of optimism doesn’t exist anymore,” she said. “No one thought 11 years ago” added Sanekzai, “we would be talking of an Afghan collapse.”

Rashid, a realist, made several DC think tank appearances in the spring of 2012 (he taught during the semester in New York City at the Graduate School of Journalism at Columbia University), gloomily assessing the prospects of his native land. Earlier at another session, he wondered if Pakistan was where he wanted his children to grow up.

At this session, he concluded that the Pakistan military now was too weak to even stage a coup of the sort they have managed four times in the country’s 63-year history. As for getting the country back on track, to use Hadley’s phrase, Rashid said Pakistan would have to force the Taliban from its safe-haven HQ in Quetta in neighboring Baluchistan back to Afghanistan and make a major effort to eliminate radicalization in its own midst.

He knows neither are about to happen.

For most of these discussions, Rashid was almost the only source of the viewpoint of an interest group that is vital to the debate over the future of Afghanistan and its relations with the United States — the Taliban.

Despite the consensus that Afghans alone eventually will determine their own national fate, the default position in Washington is that the Taliban is the enemy that must be vanquished.

In fact, Nick Dowling, head of a consultancy called IDS International, in a discussion at another DC think tank, the Atlantic Council, put “removing the Taliban from power” as a premier American interest, even ahead of removing Al Qaeda from the country. His other interests were promoting stability and “showing resolve.” The latter reflected the thinking of Sen. McCain, who spoke in his appearances of maintaining the “national honor” by staying in Afghanistan.

Dowling’s IDC International, founded in 2001, is an example of the rise of an industry founded on instability in Afghanistan.

“Since 2006, IDS has emerged as the leader in interagency, non-lethal, and “smart power” training,” its website explains. “The US military has turned to our team of former senior-level defense, development and diplomacy officials to serve as the primary interagency/PRT trainers for maneuver units deploying to Afghanistan and Iraq. Our team is responsible for creating and shaping state-of-the-art curricula….all in the fields of counterinsurgency, post-conflict operations, civil-military relations, and non-kinetic operations.”

In bold type on the site, IDS proclaimed, WE ARE THE EXPERTS, showing a client list all U.S. Army and Marines, plus the U.S. State Department.

What would IDS and other special interests like it do without instability in Afghanistan?

Understandably, no Taliban representatives are available in Washington to promote their point of view. For example, during a discussion at a DC NGO called the Center for International Media Assistance, a member of the audience asked how the Taliban viewed the media and treated it in areas of the country under its control. The panel of experts already had disclosed that donors had pumped an astounding $500 million in aid since 2001 into the Afghan communications media. The sum did not include money provided by Iran, which one panelists claimed was second only to the United States in supplying media assistance.

The first reaction of a panel of five, including two Afghans, was that nobody really knows. After hesitation, Sharazuddin Siddiqi, a London-based country director for Afghanistan for BBC Media Action, a development and training arm of the British Broadcasting Company (BBC), ventured that the Taliban attitude toward media had changed, becoming more open and sophisticated. They updated their website quickly he said, used mobile telephone clips, and operated what he called a robust monitoring system, pressuring local journalists whose work they disliked.

He said they remain authoritarian, controlling the media but claiming, “We will not be the same Taliban.”

Despite the apprehensions about their role, Siddiqi said the Taliban has made an impact in areas it controls. Noting they settle legal cases more quickly than the Karzai regime, Siddiqi said, “They have a lot more effective justice system.”

His was a rare good word for the Taliban from Washington’s Afghan cottage industry, worth noting for the future of the country.