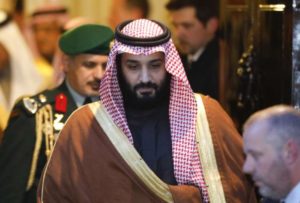 A draft US Senate resolution effectively portraying Saudi policy as detrimental to US interests and values and Crown Prince Mohammed bin Salman as “complicit” in the killing of journalist Jamal Khashoggi, if adopted and implemented, potentially could change the dynamics of the region’s politics and create an initial exit from almost a decade of mayhem, conflict and bloodshed.

The six-page draft also holds Prince Mohammed accountable for the devastating war in Yemen that has sparked one of the world’s worst humanitarian crises, the failure to end the 17-month-old Saudi-United Arab Emirates-led economic and diplomatic boycott of Qatar, and the jailing and torture of Saudi dissidents and activists.

In doing so, the resolution confronts not only Prince Mohammed’s policies but also by implication those of his closest ally, UAE crown prince Mohammed bin Zayed. The UAE was the first country that Saudi leader visited after the Khashoggi killing.

By in effect challenging the position of king-in-waiting Prince Mohammed, the resolution raises the question whether some of his closest allies, including the UAE crown prince, will in future want to be identified that closely with him.

Moreover, by demanding the release of activist Raif bin Muhammad Badawi, better known as Raif Badawi, and women’s rights activists, the resolution further the challenges fundamentals of Prince Mohammed’s iron-fisted repression of his critics, the extent of his proposed social reforms as part of his drive to diversify and streamline the Saudi economy, and the kingdom’s human rights record.

A 34-year-old blogger who named his website Free Saudi Liberals, Mr. Badawi was barred from travel and had his assets frozen in 2009, arrested in 2012, and sentenced to 10 years in prison and 1,000 lashes for insulting Islam. His sister, Samar Badawi, a women’s rights activist, was detained earlier this year. Mr. Badawi’s wife and children were granted asylum and citizenship in Canada.

A diplomatic row that stunned many erupted in August when Saudi Arabia expelled the Canadian ambassador after the foreign ministry in Ottawa demanded in a tweet the release of Ms. Badawi and other activists.

Prince Mohammed and Saudi Arabia, even prior to introduction of the Senate resolution, were discovering that the Khashoggi killing had weakened the kingdom internationally and had made it more vulnerable to pressure.

Talks in Sweden between the Saudi-backed Yemeni government and Houthi rebels to end the war is the most immediate consequence of the kingdom’s changing position.

So is the resolution that is unprecedented in the scope and harshness of the criticism of a long-standing ally.

While the resolution is likely to spark initial anger among some of Prince’s Mohammed’s allies, it nevertheless, if adopted and/or implemented, could persuade some like UAE crown prince Mohammed to rethink their fundamental strategies.

The relationship between the two Mohammeds constituted a cornerstone of the UAE leader’s strategy to achieve his political, foreign policy and defense goals.

These include projecting the Emirates as a guiding light of cutting-edge Arab and Muslim modernity; ensuring that the Middle East fits the crown prince’s autocratic, anti-Islamist mould; and enabling the UAE, described by US defense secretary Jim Mattis as ‘Little Sparta,‘ to punch above its weight politically, diplomatically and militarily.

To compensate for the Emirates’ small size, Prince Mohammed opted to pursue his goals in part by working through the Saudi royal court. In leaked emails, UAE ambassador to Washington Yousef al-Otaiba, a close associate of Prince Mohammed, said of the Saudi crown prince that

“I don’t think we’ll ever see a more pragmatic leader in that country.”

Mr. Al-Otaiba went on to say: “I think in the long term we might be a good influence on KSA (Kingdom of Saudi Arabia), at least with certain people there. Our relationship with them is based on strategic depth, shared interests, and most importantly the hope that we could influence them. Not the other way around.”

The impact of the Senate resolution and what it means for the US policy will to a large extent depend on the politics of the differences between the Congress and President Donald J. Trump who has so far sought to shield the Saudi crown prince.

To further do so, Mr. Trump, with or without the resolution, would likely have to pressure Saudi Arabia to give him something tangible to work with such as an immediate release of imprisoned activists followed by a resolution of the Qatar crisis as well as some indication that the Yemen peace negotiations are progressing.

Whichever way, the fallout of the Khashoggi killing, culminating in unprecedented Congressional anger against Prince Mohammed and the kingdom, is likely to have significant consequences not only for the Saudi crown prince but potentially also for the strategy of his UAE counterpart.

That in turn could create light at the end of the Middle East’s tunnel of almost a decade of volatility and violent and bloody conflict that has been driven by Saudi and UAE assertiveness in countering dissent at home and abroad in the wake of the 2011 popular Arab revolts as well as Iran that has played its part in countries like Syria and Yemen in fuelling destruction and bloodshed.