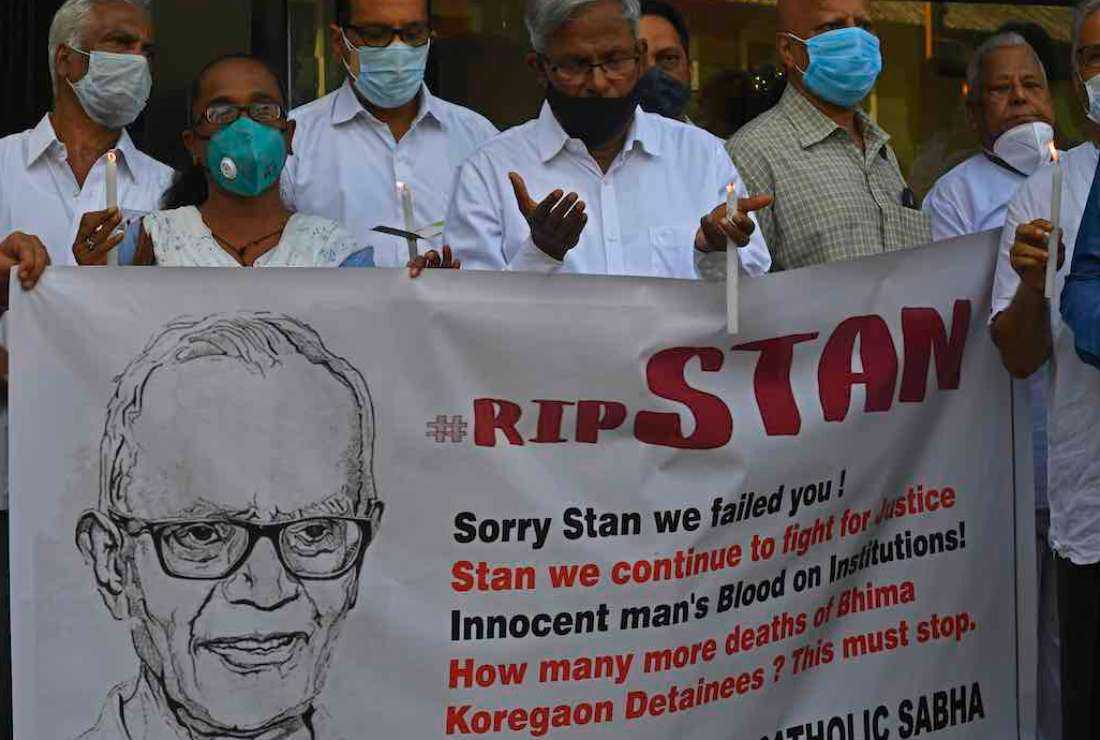 People hold candles and a poster as they pray outside a church holding a memorial Mass for the Indian rights activist and Jesuit priest Father Stan Swamy, in Mumbai on July 6, 2021. He was detained for nine months without trial under Indian anti-terrorism laws and died on July 5 ahead of a bail hearing. (Photo:AFP)

A US congressman has sought an independent investigation into the death of Indian Jesuit Father Stan Swamy, a tribal rights defender, in a resolution submitted in the US House of Representatives to honor the life of the priest.

Congressman Juan Vargas introduced the resolution to commemorate Father Swamy on July 6, a day after the first death anniversary of the 85-year-old Jesuit, who died a prisoner in a Mumbai hospital awaiting trial.

“Father Stan was a staunch human rights defender who dedicated his life to giving a voice to the voiceless. He advocated for the rights of the indigenous Adivasi people, trained young community leaders, and strived for justice for many mistreated communities in India,” said the congressman according to a press release.

Vargas said as a former Jesuit he was aggrieved over the maltreatment of the elderly Jesuit while in custody.

“As a former Jesuit, I’m appalled that Father Stan faced relentless abuse and was denied medical treatment while in custody. It’s an honor to introduce this resolution as we remember Father Stan for his lifelong commitment to the greater good.”

The resolution was co-sponsored by fellow congressmen Andre Carson and James McGovern.

Vargas joined an international webinar on July 5 to commemorate the first death anniversary of Father Swamy. The webinar was titled “persecution of religious minorities and their defenders in India: commemorating Father Stan’s death in custody.”

The resolution, among other things, asked India to set up an independent body to investigate the death of Father Swamy in judicial custody following his arrest on Oct. 8, 2020, accused of collaborating with Maoist terrorists and linking him to a violent incident in Bhima-Koregaon village.

He was detained for nine months without trial under Indian anti-terrorism laws and died on July 5, 2021, ahead of a bail hearing.

Father Swamy was among ten activists arrested in the violence in Bhima-Koregaon, a village in Maharashtra state that the priest repeatedly said he had not visited in his life.

The resolution said Indian security agencies used malware to target hundreds of Indian activists and planted incriminating evidence on the devices of some people arrested in the case.

The lawmakers also expressed concern at the misuse of anti-terror laws to target rights defenders and political opponents in India, nriaffairs.com reported.

During his speech in the webinar Congressman Vargas deplored the abusive treatment of Father Swamy.

“No one who fights for human rights should face such violence and neglect,” he said.

“The continued erosion of human rights and the rule of law makes India a less reliable partner, economically and politically, for democratic countries like Australia. This is ultimately a tragedy for both countries,” said Shoebridge.

European Parliament member Alviina Alametsä insisted that “we cannot have business deals, investments, and cooperation if the issues in India are not fixed.”

All the panelists noted Father Swamy’s extensive service fighting for the rights of the Adivasi people.

Indian tribal leader Soni Sori said that the late Jesuit priest’s struggles for the rights of tribal people were extraordinary and courageous, referring to the ongoing repression of tribals in the form of rape, incarceration, torture, and killings of Adivasis in the Bastar region in Chhattisgarh state

The panelists deplored a new round of arrests of rights defenders and outspoken journalists including Teesta Setalvad, R. B Sreekumar, and Mohammad Zubair, and urged immediate intervention before the rule of law in India worsens further.