Trumpism and the Diplomatic Dragon: Balancing Interests in the New Year 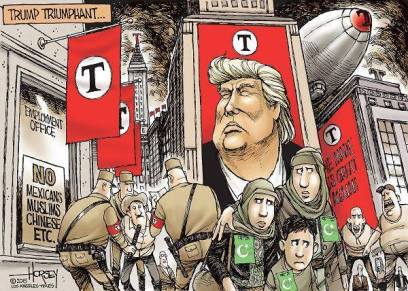 Trumpism thrives. It influences decisions with a sense of unpredictability, and the effects of Trumpism on policy has affected the entire world. The release of the National Security Strategy articulates and reaffirms his policy of America First. Trump’s National Security Advisor HR Macmaster explained to BBC that all decisions are carefully calibrated and security risks considered.

At the center of the Strategy’s decisions is the recognition of Jerusalem, the City of David as the capital of Israel. The city sits on a plateau in the Judaean Mountains between the Mediterranean and the Dead Sea. Through history, the city has been destroyed, besieged, attacked, captured and recaptured so many times. The city is vital for strategic reasons. Geopolitically- it sits in the middle of Middle East. The control of the city has been a constant struggle through time. From 2400 BC, it remains the cradle of the three Abrahamic faiths; Judaism, Christianity, and Islam. The walls around the Old City dividing the city into different quarters were set in place by the Ottoman emperor Suleiman the Magnificent.

Moving into 2018, Trumpism spills deeper through the city walls. The unpredictability unfolds threatening and challenging the entire Middle East. US Hegemony was seen by vetoing the UN security council resolution calling for the withdrawal of Trump’s recognition of Jerusalem as Israel’s capital. It was a move backed by every council member.

As promised during his election campaign, Trump’s promise was delivered. This has affected several nations including Sri Lanka. Sri Lankan resistance to this decision came in the form of Palestine Parliamentary association and Sri Lanka committee for solidarity with Palestine holding joint protests and signing a declaration against Trump’s decision.

On the other hand, the US President warns to cut off aid to countries that support and vote against the US resolution. The unfolding events signal the height of geopolitical tensions unfolding at the dawn of the year. Perhaps, as an indirect consequence, and a new year gift, Sri Lanka will lose the GSP for their largest export market, the USA.

Along the Indian Ocean geopolitical hotspot, Rama Setu, geologists have found the stones along the surface that were older than the sand below it. It indicates avenues to perhaps demystifying the ancient mythological tale of the Ramayan. The bridge was human engineered and built and not natural. If this reveals that the bridge was man-made, the civilizations of Indo-Lanka will be one of the most ancient. The rocks have been dated back 7000 years.

Despite the antiquity of Indo-Lanka relations, the Chinese sphere of influence is seen in the Island nation due to the strong strategic relationship built over time and China has already become the largest trading partner beating India.Even before the full functioning of the grand OBOR project, the ripple effects are already felt in the Island nation. China has acquired 15000 acres, the largest portion of land ever leased out to a foreign investor for an economic zone in the recent time. The Economic Zone closer to Hambanthota Port, the strategic harbor built by Chinese money another pearl in the string of pearls theory speculated to surround India. What China has given to nations like Sri Lanka is connectivity to outside world.

Geopolitically, China has made a significant presence with ports and many other infrastructure projects in the Indian Ocean region including investment in Gwadar Port the ‘crown jewel’ of CPEC corridor with another $230m grant for a new international airport. Geostrategically, the Chinese have already carved out their access to warm Indian Ocean waters.

Several of these projects are completed by Chinese commercial loans.US Secretary of State Rex Tillerson at a recent lecture at CSIS explained that as predatory loans given by China to developing nations, it is important for the US to strengthen its relationship with India to ensure “it does not become a region of disorder, conflict, and predatory economics.” Speaking at the monthly Security Salon of the INSS the Security Studies Think Tank, Prof. Patrick Mendis described how there is no stopping China having its military base in Sri Lanka. The present Government and ones after will not have the muscle to stop it. Prime Minister of Sri Lanka denies that he will not allow a Chinese base and further pledging to the Indians to lease out the Chinese built new Airport known as the Ghost Airport will be leased out to India for US$300m for 40 years. India is set to take over the Airport in Mattala to minimize the Chinese influence.

Out of 2 million tourist arrivals, Chinese tourist arrivals has been about 13% denoting a significant yearly increase and events such as the recent marriage ceremony of 50 Chinese couples shows Sri Lanka has already become a popular destination adding to OBOR cultural relations between the two nations. The Chinese ambassador in Colombo had his farewell bid from a traditional Kung Fu show at the Mahinda Rajapaksa theater; this was also to remember the 60 years of diplomatic relations and the 65th anniversary of the historic 1952 Rubber-Rice Pact.

The Chinese Ambassador Yi Xianliang played the crucial role in Sino-Lankan relations as he had to face the newly appointed Sri Lankan Government in 2015.One month after starting the tenure with an anti-Chinese sentiment highlighting large scale corruptions in Chinese projects initiated during Rajapaksa tenure, eventually, the new administration found themselves in a minefield having to reverse decisions and rhetoric a presidential election campaign was based upon. The dragon cannot be investigated. Its economic might resonates through the island in a deeply interwoven web of infrastructural support. The speculative argument begs the question if the transfer of predatory loans will become military bases. The Pentagon report released in June that China will establish military bases in the Indian Ocean resonates this view.

A view from the Chinese built Lotus Tower presents a deepening of the above mentioned interconnected global issues. An aerial view of the island surrounded by the Indian Ocean presents one of Chinese soft power and diplomacy sweeping through the island, while global forces contend over the waters that have connected the island through time-the waters of the Indian Ocean.