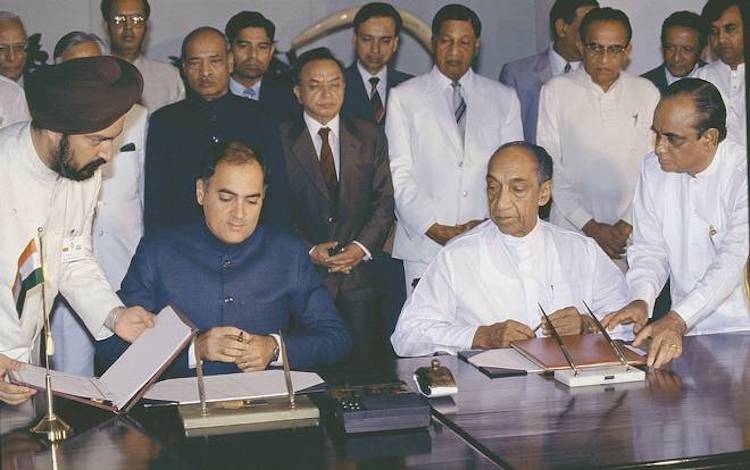 The scorching summer of 1987 saw the relations between Sri Lanka and India plummeting to a lowest ever ebb. New Delhi’s decision to airdrop supplies over Jaffna had opened up a diplomatic Pandora’s Box. New Delhi tried to justify this blatant violation of Sri Lanka’s sovereignty as an act of humanitarian necessity. But the world knew it as a hegemonic political action entangled directly in the ethnic crisis in Sri Lanka.

The Indian invasion of Sri Lankan air space was aimed at stopping the military action of the security forces, which had launched their most concerted and coordinated offensive to wrest Jaffna Peninsula from the ruthless clutches of the terror outfit, the Liberation Tigers of Tamil Eelam (LTTE), in what Colombo described as a “fight to the finish”. Across the Palk Strait, in Tamil Nadu, pressure mounted remorselessly as Tamil militant spokesmen painted horrific pictures of Sri Lanka’s “genocide” against their Tamil cousins and the bombing of ‘civilian’ targets and killing of ‘innocent’ people in the Jaffna Peninsula.

In New Delhi, the Rajiv Gandhi Government, which was increasingly accused of indecision and indifference to the ethnic war in Sri Lanka and faced with domestic unrest and a sharp drop in its popularity ratings, was stung into this dubious action of breeching sovereignty of a neighbour. Suddenly, and without warning, the ethnic war in Sri Lanka escalated into a major regional and international crisis as the Indian Government opted to alter its role from that of a mediator to an active participant.

Early May in 1987, the Vadamarachchi Operation began under the close supervision of National Security Minister Lalith Athulathmudali and as the forces succeeded in rapidly moving towards Jaffna, the Indian supporters of Sri Lankan terrorists started to apply tremendous pressure on New Delhi to stop the military operation.

There were flurry of diplomatic exchanges between Colombo and New Delhi that had started in late May following the Jaffna offensive, quickly acquired a combative edge as India announced on 1 June , its intention, “motivated by humanitarian considerations”, to dispatch a flotilla of unarmed ships carrying relief supplies for the people of Jaffna under the flag of the Indian Red Cross on June 3-with representatives of the Indian and international media on board.

“New Delhi’s attempts to high-profile its aid efforts sank in the seas off the Jaffna coast as Sri Lankan naval vessels refused to allow the flotilla to enter the island’s territorial waters,” said Dilip Bobb of India Today, one of the senior journalists that travelled with the flotilla.

Crackers were exploded as Sri Lankans celebrated their ‘victory’ against what one commentator described as India’s “bumboat diplomacy”. That India had bumbled, and bumbled badly, was all too evident in the gloom that descended on South Block that housed PM’s office as well as the Ministry of External Affairs. For New Delhi the loss of face and prestige was far too serious to be dismissed lightly.

Some of them tried frantically to get in touch with the three men they consider friends of Colombo. While Gamini Dissanayake contacted his Indian Cricket Board counterpart, Minister N. K. P. Salve, Hameed got through to Minister Dinesh Singh. Bernard Tilakaratna was in continuous touch with Foreign Secretary Romesh Bhandari. But the Indian side was noncommittal and in the final hours they were incommunicado.

Indian High Commissioner Jyotindra Nath Dixit, who was acting like a Viceroy was for stern action and he received a message from Natwar Singh, Minister of State for External Affairs that India was planning to air-drop relief supplies over the Jaffna Peninsula. Prime Minister Rajiv Gandhi who was in Goa retuned to Delhi at midnight and immediately the Political Affairs Committee of the Union Cabinet met.

Tamil Nadu Chief Minister M. G. Ramachandran was specially flown in from Madras for the midnight meeting. The session lasted until early morning the majority opinion was that India should, “act decisively to salvage India’s prestige.” They simply overlooked the fact that what Sri Lanka did was to refuse unwanted ‘humanitarian’ assistance.

The Indian Government called senior media persons to join in ‘a special mission from the Bangalore Air Base’. This columnist, who was one of the four diplomats in the Sri Lanka High Commission in New Delhi, received a telephone call from an Indian media friend that he was going to Bangalore for a ‘special mission’ and said he suspected that Indian troops were planning to land in Jaffna. The journalists were not told about the airdrop plan.

This columnist immediately reported this to the High Commissioner Bernard Tilakaratna, who was of the opinion that India was unlikely to invade Sri Lanka. He informed Foreign Secretary W. T. Jayasinghe about the latest development and urged him to inform President Jayewardene and Minister Hameed.

A few minutes later at about 2:30 p.m. Tilakaratna called all the diplomats to his room and informed that he was summoned to Natwar Singh’s office immediately. He returned to the High Commission at 3:20 p.m. and told his junior diplomats that Natwar Singh had informed that India had decided to drop emergency food supplies and medicine over the Jaffna Peninsula, that the aircraft would be taking off at 4:00 p.m. and would be escorted by Mirage 2000 fighters.

Although Tilakaratna did not disclose to the junior staff, he had already reported this to Colombo from Natwar Singh’s office. Natwar also told Tilakaratna that “any resistance would be met by force”. It was evident that the Indian action was not an outright declaration of war but little short of that act. J. R. Jayewardene immediately ordered the Air Force not to engage the Indian aircraft in any way. He was aware that the Sri Lankan Air Force with its six SIAI- Marchetti light lighter aircraft and around 20 Bell helicopters was no match for the IAF Mirages.

Indian planes dropped ‘parippu’ bags and almost all fell into the sea or lagoon and few bags that landed on the ground burst open on impact and the food was inedible. It was not ‘humanitarian assistance’ but a military warning to the Sri Lankan forces rapidly advancing into Jaffna.

India was jubilant over the ‘successful’ mission, but the price for New Delhi’s decision seemed excessively high. Sri Lanka charged India with “naked violation of its sovereignty and territorial integrity” while Prime Minister Ranasinghe Premadasa characterised the airdrop as “dogs that had mucked up the Jaffna Peninsula”. Many countries accused India of employing bullying tactics. The end result of the operation was India lost influence with both Colombo and the Tamil Tigers.

Sri Lanka was forced to announce a suspension of its Vadamarachchi offensive and to workout modalities for the distribution of Indian supplies to Jaffna. The discussions soon became a dialogue on a bilateral treaty and on July 29, 1987 the Indo-Sri Lanka Agreement was signed by President J. R. Jayewardene and Premier Rajiv Gandhi.

This agreement is still a point of contention in Sri Lanka with many seeing it as something force on the small island nation by its huge neighbor.

* ‘Sugeeswara Senadhira is the Director of International Media and Research in the Sri Lankan President’s Secretariat. This article first appeared in Ceylon Today on July 3, 2017, and is being reproduced with the writer’s permission. [IDN-InDepthNews – 9 July 2017]

IDN is flagship agency of the International Press Syndicate