The State of the Fourth Estate: A Serious Analysis Needed 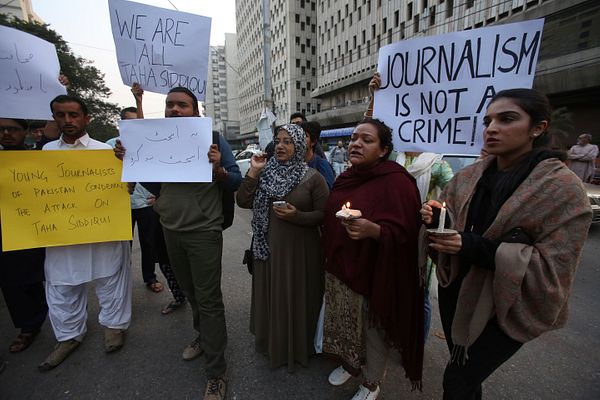 The fourth estate, the press, or in contemporary times, the media in the broader context is facing a critical and tumultuous time. Theoretically called the fourth pillar of democracy, media is under severe stress in all parts of the world. Not only in the communist or authoritarian regimes, but it is also under pressure on various accounts in all countries including the bigger and better democracies too.

The media is often called the watchdog of a functioning democracy. An important organ of a thriving political, civil system that is expected to keep a sharp eye on the happenings in all parts of the society, political, social and economic systems, make the people, including the executive and the judiciary aware of it and ensure that the law and systems are maintained.

No wonder, media is called free and is expected to stay independent so that its functioning is not adversely affected. Since media is not merely a watchdog, it is also perceived to be an important protector of the rights of citizens its role and responsibility becomes all the more crucial. However, in recent years, particularly with the advent of the internet, things have changed fast and drastically.

Now while information is available on all things, probably everything under the Sun at an instant, the credibility of the available information is suspect, in many cases, if not all. To begin with, the print media where newspapers, magazines, journals secure the maximum attention of the readers. Here also, the print media has previously come across many hurdles too. There was a time in the late 1970s and later when the greater 24×7 expansion of electronic media had led many to prophesise the gradual decline and end of print media. However, it not only survived the onslaught of electronic media but even expanded its reach further, and circulation increased manifold in many parts of the world.

Todays’ media is facing much greater competition from its own ilk and others from the fraternity. The number of newspapers, magazines, and journals has increased manifold and so has been their respective forms. It’s available there in the print, online as well as in social media. A media house has to first ensure its presence in all forms so as to reach a greater audience. And that requires a great deal of financial, technological, and human resources investment which ultimately gets down to a greater monetary muscle.

To make it financially sustainable, media, of course, has to depend on advertisements/commercials. It cannot raise its price to cover the entire production cost and hence has to reach out to readers/users at a subsidised rate. To make that happen, it has to raise circulation to a greater acceptable level where it can cover production/maintenance costs, sustain its human resources, and make profits. And to reach such a state, the media invariably gets into what is popularly seen today is the TRP war, at the altar of objectivity and transparency.

Today the media in India is being broadly labeled as populist, subjective, and non-transparent. An objective analysis will reveal that it is true to an extent but that is not applicable to the Indian media alone. This has been the case with media around the world, including the western media of the US, UK, Canada, Europe, and Australia too. In all places, competition has compelled the media to become more commercial and in the process, it has to pander to varied commercial and political interests.

In the last few years, Indian media has been accused of explicitly surrendering to the whims and fancies of the ruling party and its leaders. It’s been accused of this even before but today the accusations are more grave and direct. There are allegations of pro-Modi media and that it is always projecting the government and its actions in a positive light. That the opposition parties, their leaders are portrayed in a poor light and that opposition-ruled states do not get the adequate amount of relevant coverage to reach out to the masses. However, the most disturbing contentions relate to the media being pressurised politically and finically to stick to a supposedly pro-government role.

Since 2018 when six journalists were killed in different incidents, India has been witness to a number of cases of police brutalities against media, violence by political workers, mostly by the ruling party in states like UP, West Bengal, Andhra Pradesh, Rajasthan, Maharashtra. Committee to Protect Journalists (CPJ) has reported the filing a number of cases against journalists for reporting corruption in various government departments.

There have been shocking episodes of police slapping draconian, outdated legal measures against commoners for merely sharing cartoons or hilarious comments on social media against political leaders, indicating the level of intolerance afflicting the current crop of politicians from various parties in India. Very recently, incidents of Enforcement Department (ED) charges against a prominent private TV channel owner, widely regarded as a critic of Modi-government and state police action against a pro-Modi owner of another TV channel by the opposition-ruled government are suggestive of the sorry state of affairs for the media in the country.

In Indian state of Kashmir, the clampdown on the internet as well as print media by regulating the flow of government commercials, has affected the media autonomy severely. For almost a year since the abrogation of Art 370 of the Indian Constitution, the people and the media had been virtually left with information paralysis in the state.

A closer look into the figures of Audit Bureau of Circulation (ABC), Broadcast Audience Research Council (BARC), and Directorate of Audio-Visual Publicity (DAVP) will suggest that most of the top circulating publications/media houses are maintaining a pro or neutral government stance in their reporting and that is also reflecting in the financial patronage they are getting in terms of government advertisements and commercial support.

The situation in other parts of South Asia is no better. Bangladesh has seen a good number of violent attacks and intimidation against journalists in recent times. For reporting malpractices during Dhaka municipal elections, ten journalists were assaulted. Political leaders and public officials attacking independent media overexposing corruption in government have become routine.

In Pakistan too, the independent media watchdog Freedom Network has cited more than 90 cases of violence against journalists during May 2019- April 2020 period. There have been incidents of killing, illegal detention, physical assault, threatening, and illegal framing of charges of media men. Blocking of TV shows and news reports have become frequent and media itself has resorted to forced self-regulation whereby it thinks twice before printing/showing something that is unpalatable to the ruling PTI and the all-powerful Pakistan Army.

Reporters Sans Frontiers (RSF) in its World Press Freedom Index, 2020 has shown Bangladesh as the most dangerous country for journalists in South Asia while India, Pakistan, Sri Lanka too, have fared badly, closing in near the bottom in the 180-country index.

In neighbouring Myanmar, all hopes of a post-military Aung San Suu Kyi led-NLD government providing support to media has gone awry. In fact, in this country as against the 2011-2015 military era, journalists have witnessed more political and physical attacks in the 2015-2019 era.

In south-east Asia too, Malaysia has resorted to blocking of news websites and strict control and regulation of the print media. Most of the online media the Malaysians today are accessing is filtered and government-regulated as is the case in China. With its technologically advanced AI-enabled cameras, the largest populated country in the world is closing in on perfecting its online surveillance system, leaving no scope for real freedom of thought or expression. The situation in neighbouring Laos, Cambodia, Thailand, Vietnam, Philippines is no better.

The strangulation of the media through controlling its financial muscle, affecting the morale by physical and verbal intimidation of journalists and control, bordering on censorship on the pretexts of national security and public order and harmony, are the new ways through governments of today are trying to control the media. The trend is worrying and needs to be reversed. It needs the support, courage, and resilience of the media and civil society but at the same time, citizens too need to be conscious of their responsibility and use the social media judiciously so as not to provide the executive an alibi to go for the media regulation in a way convenient to its requirements.