The New Road to New Afghanistan 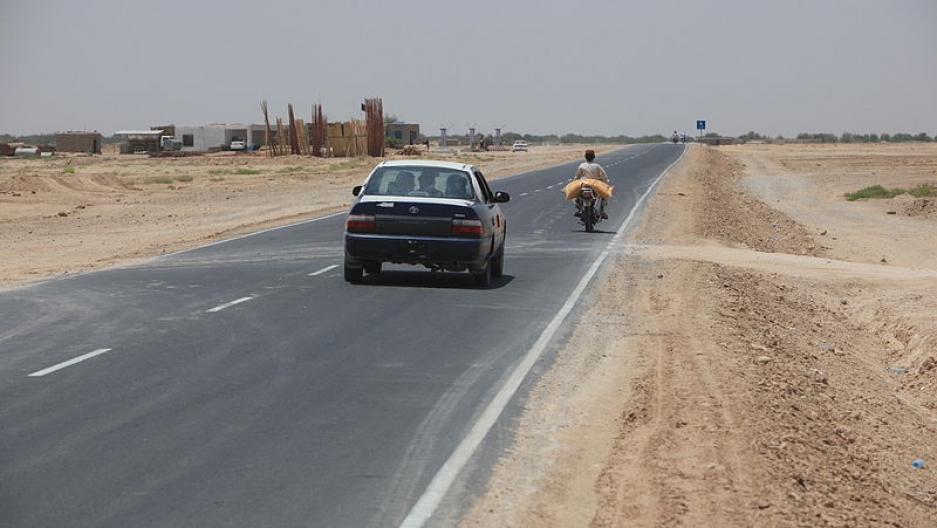 Afghans in Helmand province drive on a new road built by Afghans, in July 2012. (Photo by Sgt. Jame Mercure via Wikimedia Commons.)

Afghanistan has remained a battleground for International Powers throughout history. 11th September 2001 profoundly modified the global scenario when the United States toppled down the Taliban government and took over Afghanistan. After twenty years in Afghanistan, the United States has finally left Afghanistan. History has again repeated itself and proven that Afghanistan is indeed the “graveyard of empires” because so many foreign armies have come to grief there despite their advanced military assets.

The unfolding scenario in Afghanistan is a daunting challenge to all the future stakeholders in Afghanistan. Unlike the previous great power designs, the war-ravaged country this time may take a new road through joint diplomatic and political efforts from all regional players for her stability and prosperity. The U.S withdrawal is undoubtedly going to have major implications on Afghanistan`s neighbors and the regional players, so they need to behave very sensibly this time. A regional approach, by involving all the regional stakeholders could help in a sustainable and acceptable political settlement in Afghanistan. China, Russia, Iran, India, and Pakistan would mutually find their common interest instability in Afghanistan. This sort of solution might bring hostilities to a minimum in Afghanistan which is historically renowned for active proxies. Such a settlement may further prevent international and regional powers from playing out their rivalries on Afghan soil.

Pakistan being a major regional power wants stable and non-violent Afghanistan which is important for her own stability and interests. Pakistan has been the worst victim of the war in Afghanistan for the last 4 decades, as Pakistan sacrificed more than eighty thousand valuable human lives and suffered about 250 billion US dollars in monetary losses, and faced other serious consequences, including terrorism and extremism.

Furthermore, the United States is using Pakistan as a scapegoat. Pakistan understands Afghanistan better than any other country, as the two countries are associated via a long border as well as a common way of life, language, religion, and ethnicity. No other state can play the role of Pakistan, in bringing peace and balance to Afghanistan. The world knows and is aware of Pakistan’s strength and capability. The recent developments including the role of Pakistan in Afghanistan strengthen this argument.

Now that the Taliban have regained their position the significant regional players are increasingly convinced that they need to take charge of their vicinity. The United States and its allies` withdrawal from Afghanistan is seen as a big shift in the worlds` politics. South Asia is now emerging as a multipolar region where distinctive states are exerting influence via new groups and networks. That is why Russia and China are very sensibly courting the Taliban and appear very devoted to tackling Afghanistan’s security and financial problems. The countries that continue to retain embassies in Kabul include Pakistan, China, Iran, and Russia which speaks a lot about their role in the upcoming years.

Beijing and Moscow can push for the global recognition of the Taliban and their elimination from the UN-sanctioned terrorist listing. This can accommodate the Taliban from being isolated in world politics. On the other hand, institutions like Shanghai Cooperation Organization (SCO), Collective Security Treaty Organization (CSTO), the South Asian Association for Regional Cooperation (SAARC), and the Asian Bank can play a vital role in strengthening and constructing new Afghanistan, politically and economically.

Given the urge for development assistance, China had provided about the US $240 million to Afghanistan from 2001 to 2013. Around the US $80 million were pledged by China in the year 2014 alone. Furthermore, both countries have also signed an agreement worth the US $76 million on Technical Cooperation. The mineral resources in Afghanistan are estimated to be more than worthy 5 trillion dollars possibly, which makes her a very potential player in China’s Belt and Road initiative. Pakistan and China both, are already interested in extending the China-Pakistan Economic Corridor (CPEC) to Afghanistan. The CPEC could connect Afghanistan through rail, sea, and road which could open the doors of trade for Afghanistan. This could also play a great role in the economic integration and regional connectivity of Afghanistan.

Apart from the role of international and regional powers in paving the way for a new Afghanistan, a huge responsibility also lies on the shoulders of the Taliban that how they create an inclusive government that would be acceptable for all stakeholders. How they will disassociate themselves from their earlier monstrous image and project their new reformed humanistic revival which will be acceptable to the international community.

At the moment what the Taliban need the most is engagement with Afghan civil society and internal cohesion. This can strengthen their position over their system of governance and perception of ideas in relation to their national and ideological interests in line with international standards.