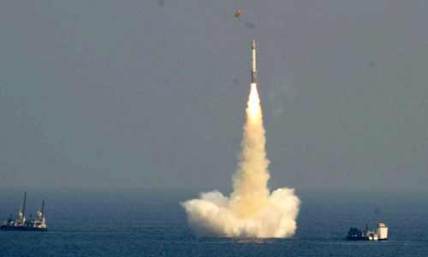 The third leg of the bourgeoning Nuclear Triad of India is of great significance. In any event, the first strike takes out India’s land-based ballistic nuclear missiles and strategic aviation, then the Indian Navy’s Arihant lurking in the ocean depths to avoid and launch an ambush and retaliatory strikes will render the attacking country unfit for human life.
The austerity of the idea of placing a nuclear deterrent on submarines emerged in the 1950s, as the United States and the USSR explored different avenues with arming diesel-electric boats with basic cruise and ballistic missiles.

India has maintained a strong nuclear force to ward off any possible misadventure; India too has built a formidable arsenal including nuclear weapons. As indicated by the most recent information by Stockholm International Peace Research Institute (SIPRI) an international think tank on conflict, armaments, arms control and disarmament, India has burned through $63.9 billion on its defense forces in 2017, an increase of 5.5 percent compared with 2016.

Notwithstanding the reports that surfaced regarding an accident that might have damaged INS Arihant. The news item reported by The Hindu stated that the Arihant’s propulsion compartment was damaged after water entered it, as a hatch on the rear side was left open by mistake. This report however raised questions rather than furbishing any response primarily because of the glaring technical irregularities, for the submarine has no hatches there. INS Arihant is based on Russian double hull design which has a sealed nuclear reactor section.

Moreover, The Hindu’s reporting on the Arihant brings into limelight the threatening and upsetting partition between the nation’s political and military authority.

According to the Ministry of External Affairs, India has formally announced and established a command structure which is directly under the civilian control. The Nuclear Command Authority established by India includes a Political Council and an Executive Council. India’s Prime Minister chairs the Political Council. It is the only body with authority to order a nuclear strike. The National Security Advisor chairs the Executive Council, which advises the Nuclear Command Authority and carries out orders from the Political Council. However the height of incongruity is that the absence of Arihant from operations came into the knowledge of the Political leadership only when the Indian Navy was carrying out the precautionary advance deployment of submarine assets following the Doklam standoff with China., It is exasperating to note that India’s political leadership came to know about one leg of nation’s strategic triad only after they requested a precautionary advance deployment.

The accident not only underscores the professional incapability of the Indian Navy but also speaks volume of the widespread failure in intelligence and the respective checks and balances in place. It additionally implies that military is not keeping the civilian government on the up and up which is against India’s declared operating procedures.