Tackling corruption is impossible without democracy 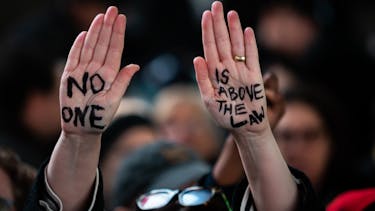 Corruption is at once a bureaucratic, institutional and political problem. A cure for this problem lies in accountability because there is a clear connection between corruption and lack of accountability. Corruption takes place when the agent and the client collude, according to the principal-agent-client theory, where the agent (politicians and bureaucrats) does not need to be accountable to the principal (people of the country). Here the clients are the people who seek to have license, permit, registration, etc. from the government or have to go to government offices to get things done. Good governance and accountability—two basic components of democracy—are key factors for economic and human development because only in a purely democratic environment, it is possible to avert the unholy collusion between the politician or bureaucrat and the people going to government offices to get things done. It is worth saying at this point that people are compelled to pay bribe because of the corrupt trap set by the bureaucrats, taking advantage of bureaucratic doldrums.

Amartya Sen, in his book “Poverty and Famines”, emphasised the importance of democracy. Sen describes democracy as a form of universal values and says that it is democracy that can also avert famines. Democracy is essentially a system where existence of multiple parties, election and criticism of government by the opposition are its integral parts. Sen in his book “Development as Freedom” shares the same view and adds that free media and presence of the opposition are a must for development.

Consider the fact that once there were many countries including the then Soviet Union where the socialist/communist system was in place. Now it exists only in Cuba and North Korea. All states belonging to the erstwhile Soviet Union have been following capitalist economic models since their separation. In China, only one feature of the communist system exists. Dictatorship of the proletariat is an amazing philosophy no doubt. But the problem started when the leaders and activists of the Communist Party refused to remain proletariat any longer, and wanted to own wealth and means of production. When democratic practices are absent within the party, when party leaders behave like bureaucrats and when there is no scope to bring a change in party leadership, despite numerous complaints against them, corruption must come in. And it did.

Jean-Paul Sartre’s belief in communism is well-known although he was never a member of the French Communist Party. He remained a true believer of communism until he died. However, he was also a stern critic of Stalin’s regime. To give communism a humane face, Sartre felt the necessity of democracy. The reason why he liked the Cuban Communist Party so much is that there were democratic practices within the party. Ahead of the party congress, extensive discussion meetings, exchanges of views and debates were held. For example, in 1991’s congress, there were 89,000 meetings in total, where 3.5 million Cubans participated from inside and outside the Communist Party. Any one, whether from within the party or outside, was able to raise complaints against any party leader. To represent in the National Assembly, one had to have 50 percent of the votes from his or her constituency. The central message of what has been said about Cuba is that, without democracy, without opposition and without checks and balances, corruption is bound to come in.

Bertrand Russel mentioned three motivations in the preamble of his autobiography. One of them is his endless love for the distressed humanity. Perhaps that was the reason why he considered himself a socialist. He visited the erstwhile Soviet Union as one of the team members representing the British Labour Party in 1920. Although he was not disillusioned by socialism, he did not like the socialist model existing in the Soviet Union at that time. That a system without freedom of speech, opposition parties and freedom to gather gives rise to autocracy, was witnessed by Bertrand Russel himself. It is surprising that after a one-month visit, what he wrote of the situation prevailing in the Soviet Union in his diary now prevails in Bangladesh, a country of parliamentary democracy. He wrote, “All kinds of tricks are being adopted on the way to an absolute dictatorship under which the opposition parties—even leftist parties—are not free to speak and gather.” I hope the readers have not forgotten that even the leftist parties in Bangladesh under the current regime have not been always allowed to assemble to have their say, and that the scene of the baton charge on leftist protesters is still fresh in their memory.

Joe Devine, a professor at Bath University, refuses to accept the popular narrative of growth and development as indicative of real development. When Bangladesh has already earned her reputation for development, David Luis, a professor of economics at the London School of Economics, mentions the lack of good governance and widespread corruption in his book “Bangladesh: Politics, Economy and Civil Society”. He also says that the parliamentary system here has not been effective at all and that although the democratic process was introduced after 15 years of army rule, there has been little change in the corruption perception index of the country. It means, what is being called a democratic system is not actually a democracy, because accountability, which is at the centre of any democracy, is missing here. Often, after being elected as members of parliament, leaders are seen to concentrate on gathering wealth rather than being accountable to the people because they know that it is money that can help them manage party tickets for the next election and then purchase votes. This cannot go on. We must enforce accountability and good governance to truly benefit from democracy.

The article was published in the Daily Star on December 11, 2020