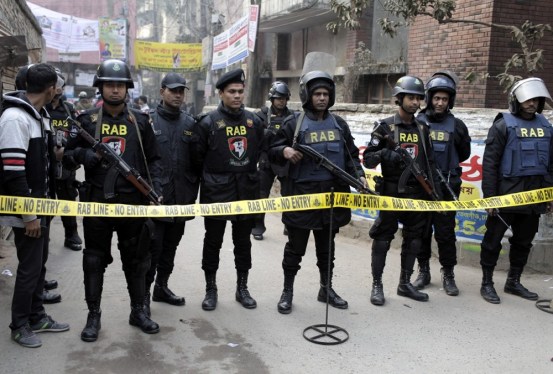 A suspect in the June 11 murder of a secular publisher was killed in a “crossfire” incident in Dhaka on Thursday, four days after being taken into custody, police said Thursday.

Abdur Rahman was arrested Sunday as a suspect in the killing of writer and publisher Shahzahan Bachchu, according to Mohammad Zayedul Alam, the police superintendent of Munshiganj district.

On Thursday, Rahman was accompanying security forces who were preparing to raid a suspected militant hideout when militants opened fire, prompting authorities to fire back, Alam said.

“Rahman’s collaborators attacked us and tried to snatch him from us. Then police also opened fire,” Alam told BenarNews. “During the gunfight between police and militants, Abdur Rahman was shot dead.”

Bachchu, 57, was at a pharmacy in his village in Munshiganj when four suspects on two motorcycles gunned him down 17 days ago, police said.

Police said the suspects set off Molotov cocktails before shooting Bachchu, a former secretary general of the Munshiganj branch of the Communist Party of Bangladesh. The gunmen shot Bachchu after dragging him out of the pharmacy, a witness told BenarNews at the time.

Investigators linked JMB to Bachchu’s killing after Rahman and his 28-year-old wife were arrested on Sunday following a raid on a militant hideout in Gazipur district, near the capital Dhaka, police told BenarNews.

The pro-Islamic State JMB claimed responsibility for synchronized nationwide bomb attacks in August 2005, in which the group set off almost 600 bombs within 30 minutes across the country. The bombs, mostly detonators or without explosive charges, killed two people, forcing the government to admit the presence of militants in Bangladesh.

The government shattered JMB’s organizational network in 2007 by executing its founder, Shaikh Abdur Rahman, and his military wing chief, Suddiqul Islam, after convicting them in the killings of two assistant judges.

Suspected militants have targeted secularist bloggers, publishers and writers in recent years, killing at least 10 of them between February 2013 and April 2016 in machete attacks, police said. Dozens of suspects have been arrested and imprisoned in connection with the killings.

In July last year, the New York-based Human Rights Watch called on the Bangladeshi government to investigate allegations of summary executions of people caught in so-called “crossfire” incidents, a common term for alleged shootouts between police and suspects in the custody of authorities.

Rights activists in Bangladesh have suggested that that many of these incidents are staged.

Human rights activist Nur Khan Liton, in a phone interview with BenarNews, questioned the circumstances that led to Rahman’s death.

“How can such an important suspect become a victim of a gunfight?” he said. “Is anybody trying to hide the actual facts?”