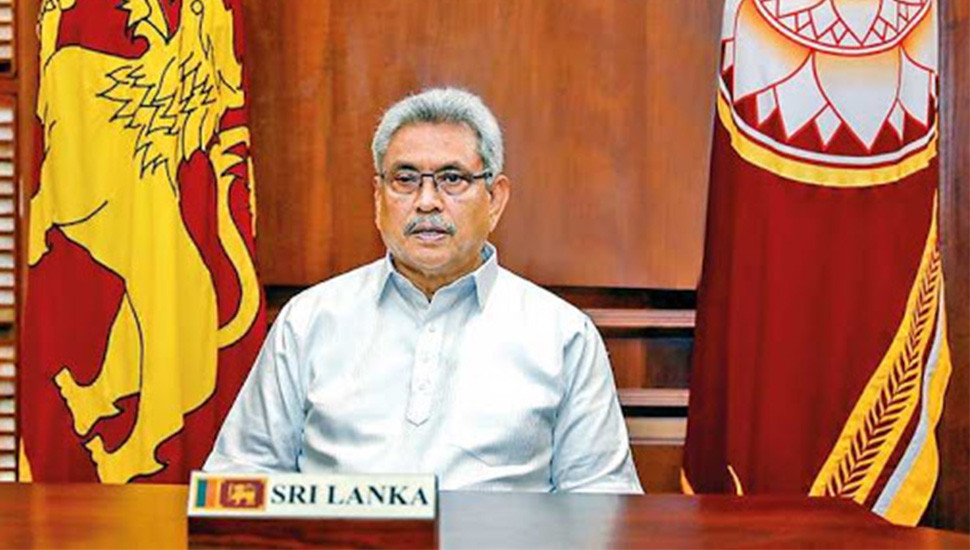 With his pre-recorded appearance in the UN General Assembly, President Gotabaya Rajapaksa has become the first Sri Lankan leader to use technology more than ever to reach out to the rest of the world. Though immediate floor reactions could not be gauged because of this process, caused by the global COVID-19 pandemic, it has also underlined the issues on which the world should be expending more time, money and energy – but was not doing.

“At a time when the world is facing a common and an unrivalled threat, the ‘United Nations We Need’, I am certain, will place due emphasis on the sovereign equality of States, respect for territorial integrity and non-interference in their domestic affairs”, President Gotabaya told UNGA. “We expect the United Nations will place due emphasis on non-interference in domestic affairs of other States,” he added.

As agreed upon by member-nations pre-COVID-19 last year, the UN marked its 75th anniversary with a one-day, high-level meeting of the General Assembly on Monday, 21 September 2020. The theme for the day said it all: ‘The Future We Want, the UN We Need: Reaffirming our Collective Commitment to Multilateralism”. In his address, President Gotabaya said that he firmly believed that partnerships fostered between Member-States and the UN continued at their best when no country is held hostage to the interests of a few.

President Gotabaya also reiterated that Sri Lanka was committed to follow a neutral foreign policy with no affiliations to any particular country or power bloc. Read with other parts and aspects of the address, the President was possibly telling the ‘international community’ that their perceptions of Sri Lanka’s China relations under the Rajapaksas should not be a cause for them to hold the Indian Ocean island-Nation ‘hostage’.

In a pointed reference to the role of terrorism and attended war-crimes issues used to target the country, President Gotabaya, said without naming the latter: “Sri Lanka, having experienced separatism and terrorism for nearly three decades, condemns all terrorist acts in the strongest possible terms, be it domestic or international. In spite of its elimination from the Sri Lankan soil, the international network of this terrorist outfit remains, pushing its ruthless ideology and influencing certain Capitals to spread its baseless lies and propaganda.”

He added: “We are hopeful that no State will tolerate activities of this international network which continues to espouse and propagate violent ideology under different guises and manifestations.” Translated, it meant the West should shut down the shops of pro-LTTE Diaspora groups before preaching human rights and war crime probes to Colombo – not that as a sovereign State, Sri Lanka would have suffered such interference, whether done directly or through the arms of the United Nations.

Shooting from the hip

From the day Gotabaya Rajapaksa became President and his SLPP under Prime Minister and brother Mahinda Rajapaksa, a predecessor by two terms, obtained an unmatched and even more unassailable two-thirds majority in the Parliamentary Polls this year, it was clear which way his Government would handle the UNHRC 30/1 Resolution. A week or so after he obliquely told the Nation in his maiden Independence Day address not to push Sri Lanka to a corner, Foreign Minister Dinesh Gunawardena told the UNHRC that the country was walking out of the resolution, co-sponsored by the earlier Government of the Sirisena-Wickremesinghe duo.

As a no-nonsense army veteran who did not mince words, Gotabaya has been shooting from his hip on the UNHRC process and the unilateral and one-sided approach of the West and more so the UN affiliates in his earlier speeches. This time round, he was addressing the UN and the General Assembly even more particularly, that the parent should not let the ward be a hand-maiden of a select few member-nations.

There is nothing to read between the lines in this. The President was telling the world body not to push Sri Lanka beyond a point. Two, it should also let select nations to use it as a tool and forum to push a few others (especially a select few from the Third World) in to a corner (and expect them not to react, in the only ways that they could).

In her bi-annual report to the UNHRC earlier in the month, High Commissioner Michele Bachelet said that the Sri Lankan Government was ‘swiftly reneging on its commitments to the Human Rights Council since it withdrew its support for resolution 30/1.’ True as it may be, given the official Sri Lankan position, it is anybody’s guess why the UNHRC and also the ‘Core Group’ of nations that sponsored the resolution, did not press the friendly regime of the Sirisena-Wickremesinghe duo earlier, for action on the commitment.

Incidentally, the UK has replaced the US, the original sponsor of the original resolution in 2012. As if out of the blue, the US walked out of the UNHRC one fine morning – no questions asked. What kind of lessons that such a behaviour on the part of the world’s single-most power nation give in their own conduct vis-a-vis the UN and other international organisations – and their own international commitments?

Instead, in instalment, they gave the previous Government time in instalments, the last one extending full two years, and ending in March 2022. They were clear that a new President and a new Government would be in place by 2019-20, and that there were greater chances of the Rajapaksas returning to power.

Does it meant that the post-30/1 UNHRC process at least was aimed at targeting the Rajapaksas in office rather than even the Sri Lankan State and the Nation’s armed forces. After all, independent of internal, domestic squabbles, the previous Government had greater credibility with the West and also the Nation’s Tamil minorities and their mainstay TNA polity (of the times) than the Rajapaksas or any other may have had at any point in time.

If the idea was to beat the iron when it was hot, the UNHRC and the Core Group should have got what they wanted then, not stopping with celebrating the relatively lesser initiative of the Wickremesinghe dispensation in terms of the ‘Office of Missing Persons’ and the like. Even on this score, the earlier Rajapaksa-created institutions like the LLRC and the Paranagama Commission did more work, seeking more support and cooperation from the West, to identity ‘missing persons’ hiding in those nations, as citizens and with aliases in many cases (possibly).

In her report, High Commissioner Bachelet referred, ‘among other developments’ to the ‘the proposed 20th Amendment to the Constitution’, which she said, ‘may negatively impact on the independence of key institutions, including the National Human Rights Commission’. She wanted the ‘surveillance and intimidation of victims, their families, human rights defenders, journalists and lawyers should cease immediately’.

In fine diplomatese, the High Commissioner sought to ‘encourage the Council to give renewed attention to Sri Lanka, in view of the need to prevent threats to peace, reconciliation and sustainable development’. Taking off from where High Commissioner Bachelet left, the self-appointed Core Group on Sri Lanka at the UN on Tuesday said instances of intimidation, harassment and surveillance continue, including threats to families of disappeared persons in Sri Lanka.

Speaking for the Group, UK’s International Ambassador for Human Rights, Rita French, in her statement to the Council said, said that they ‘continue to hear concerns about an increasingly difficult operating environment for civil society and human rights groups in Sri Lanka’. French also served notice on Sri Lanka, the Rajapaksa leadership in particular: “Next March, the Council will consider an important report by the High Commissioner, on human rights, reconciliation and accountability in Sri Lanka”.

Specifically, it will consider the steps taken to implement resolution 30/1, but the “Government of Sri Lanka has been clear to this Council that it no longer supports resolution 30/1. The Core Group, once again, reiterates its profound disappointment at this development”. Ambassador French took on record the Government’s statement on ‘continual commitment to fostering reconciliation, justice and peaceful coexistence among Sri Lanka’s diverse communities’, but was quick to add, “such processes previously have regrettably proven insufficient to tackle impunity and deliver real reconciliation”.

According to Ambassador French, “This Council will want to pay particular attention to how the new approach, will differ from these previous attempts and put the victims of conflict at its heart…The future of the Independent Commissions including the Office on Missing Persons and Office on Reparations will be particularly important,” she said.

The Sri Lankan team at the UNHRC has since given a point-by-point rebuttal to High Commissioner Bachelet’s observations in her bi-annual report to the Council. But with both the UNHRC chief and the Core Group having served notice to Sri Lanka on what to expect in the upcoming March session, it may be time for Colombo to look at its options and get battle-ready, if that is where it leads the nation, too.

It will then be interesting to see where the mainline political Opposition in the country stands. At the height of the post-war UNHRC sessions, Wickremesinghe and company, then in the Opposition, could look the other way when President Mahinda Rajapaksa’s Government made things easier for them, by simply declining to engage with the UNHRC, which Colombo said, was pre-disposed to and pre-determined, too.

It is not unlikely that the Gotabaya Government may seek to bring in the Opposition SJB, led by Sajith Premadasa, and other political parties like the JVP on board. While the Rajapaksas seem to have decided on their overseas strategy – and their tactics alone may remain to be fine-tuned – the UNHRC may provide them an opportunity to corner the domestic ‘Opposition’, instead.