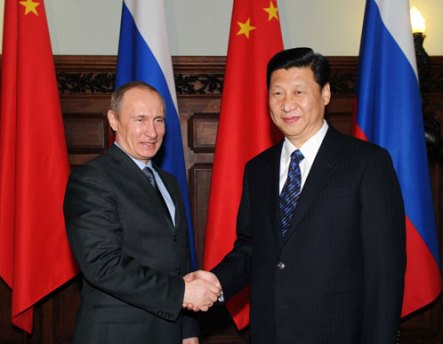 India has heavily reordered its policies to survive against the (Sino-Russian) axial threat – reliance on past sentimentalism and old friendships is being challenged by the new global geostrategic environmental revamp, writes Adrij Chakraborty for South Asia Monitor

Russian President Vladimir Putin’s landslide victory in the 2018 elections extended his rule over the largest country in the world for another six years. His hostile relationships with the Occident nations of Great Britain and the United States of America ensure not only his continued regime but also his elusive Asiatic policies. Putin will remain in power at least till 2024. He has promised to beef up Russian defences against the West, and to improve trade relations with other nations.

Chinese President Xi Jinping’s coronation as China’s ‘ruler’ for an indefinite period of terms, coupled with Putin’s accession to power carve a new form of authoritarian political order. It stands to challenge the liberal order in Asia and the world like never before.

Financial forecasts predict $100 billion worth of annual trade between China and Russia in 2018. Both countries are actively working on several investments such as the development of the Siberia gas pipeline and a liquefied natural gas facility on the Yamal peninsula in the Russian Arctic.

These statistics are hugely relevant to two other countries that are closely linked with Russia and China in different capacities, India and Pakistan.

China refuses to acknowledge Indian global power aspirations and has denied yielding on key security demands. Russia may find cooperation with China a valid response to its problems with the West, owing partially to the shared mistrust for the Occident of both China and Russia. Herein comes in the Karachi factor.

In Pakistan’s Six-Nation Speaker’s Conference 2017, power juggling was noted. Discourses about the issues of interest for the participatory countries invited the Kashmir issue from the Pakistani delegation. The need for a peaceful resolution in accordance with the United Nations to ensure global and regional peace was acknowledged by the six partakers, including Russia and China. This is a soft callback to the Pakistani demand of a Kashmiri plebiscite notably in accordance with Resolution 47 in the UN.

Notwithstanding Russia’s reservations against the inclusion of the Kashmir issue, citing India’s absence, the Kremlin delegation moved to discuss greater cooperation among members of the Shanghai Cooperation Organization (SCO), of which even India is a part.

Despite arrangements for cooperation programmes between India and Russia, divergences continue to grow in the Indo-Russian bilateralism as structural undercurrents change political positions in the international environment.

Russia has been an open advocate against India’s opposition of China’s One Belt One Road Initiative. India’s opposition to OBOR lies in the sovereignty issues with the China Pakistan Economic Corridor, which serves the economic prospects of both Karachi and Beijing.

Russian interest in OBOR distances itself from India’s position and its historical support to Indian causes in the global sphere. India has to, therefore, find an axis with the like-minded nation(s) to survive in the dominion of growing hostility.

India has shown enthusiasm in an alternate bloc arrangement to secure its position in the Indo-Pacific region, much to Russia’s chagrin. The Kremlin has stated its opposition to the quadrilateral group comprising the US, Japan, Australia, and India. The quadrilateral is seen as an effort to contain China’s growing assertiveness in the South Asian region.

Russian statements rebut the sustainable security architecture in the Asia-Pacific region that clearly lacks an open ended collective bias. Threatened by the Sino-Russian bonhomie and Pakistan’s centrality with two major players in the region, Indian policies have temporally softened since 2012, when Putin was re-elected President.

The authoritarian regimes of Putin and Xi have invited the liberal world order to extensively review as many aspects of bilateral relations as possible. These focus on strategic and defence relations between the two countries. India has therefore heavily reordered its policies to survive against the axial threat. Be it India’s turn to import armaments from US-backed Israel in addition to Russia, or smoothening engagements with Australia with respect to the Malabar drills – reliance on past sentimentalism and old friendships is being challenged by the new global geostrategic environmental revamp.

The Sino-Russian axis continues to threaten India and its relations with both China and Pakistan. The Indo-Russian relationship relies majorly on defence, which India is actively working to substitute. Where the economic underpinnings are lagging, there is an imperative need to acknowledge the precedent order set by two of the biggest countries in the world through their power structure and development goals.