Security Cooperation through the BIMSTEC: A New Avenue for regional Security? 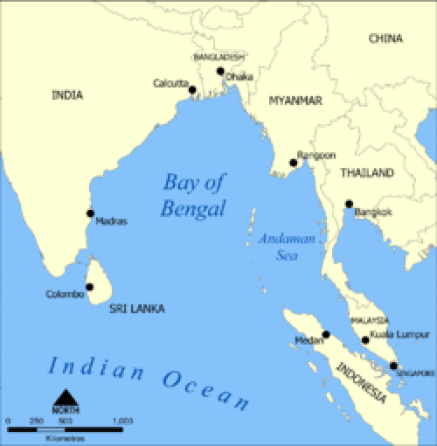 The Bay of Bengal Initiative for Multi-Sectoral Technical and Economic Cooperation (BIMSTEC) is a sub-regional organization comprised of Bangladesh, Bhutan, India, Nepal, Sri Lanka, Myanmar, and Thailand. [[i]]BIMSTEC has defined itself as a ‘sector-driven’ organization for cooperation in areas of mutual interest which includes, trade, technology, energy, transport, tourism, fisheries, agriculture, public health, poverty alleviation, counter-terrorism, environment, culture, people to people contact and climate change. The Key Centres established under BIMSTEC are based in New Delhi India, which is: BIMSTEC Centre on Weather and Climate and BIMSTEC Energy Centre. With regard to security Cooperation, BIMSTEC has a Counter-Terrorism and Transnational Crime Sector led by India.

In these subgroups, Sri Lanka is listed as the Lead Shepherd on Intelligence sharing. Sri Lanka is strategically located among important Sea Lanes of communication. By virtue of this strategic position, Sri Lanka has immense potential to become a strong base for intelligence coordination provided advanced technology, equipment and resources are in place. Currently [ii]India and USA are looking into a Joint Agreement on obtaining advanced military equipment for the sharing of encrypted military intelligence. In light of such bilateral security arrangements, there is a question regarding the role that BIMSTEC play in intelligence sharing and how symbiotic the arrangement is for the member states. There could also arise some skepticism on whether intelligence sharing (under a covert arrangement) could occur with an extra-regional power. Despite such Scepticism, it should be noted the best technology, practices and standards on intelligence sharing are with the NATO and EUROPOL.

Intelligence sharing is a complex activity depending on the sensitivity of the information being shared among relevant actors. In the case of a regional organization which is engaged in mutually beneficial security arrangement; intelligence sharing should be developed on a model that gives priority to an accuracy of information.  Adding to that, there is a need for a consensus among the members that intelligence is for strict purposes of the organization and not for an extra-regional power outside of the BIMSTEC membership. Apart from such concerns, it remains vital that intelligence sharing is given foremost position in the context of transnational organized crime. Scholarly [iii]findings suggest the advancement of technology and the impetus of globalization has provided criminal networks with the potential to collaborate with both criminals and politically motivated groups for business purposes. (Marenko, 2001) Furthermore “Criminal syndicates have over time adapted to a changing world’. (Liss, 2006, 174). Today organized Crime has evolved to navigate security patrols and disguise crime in a manner which has made such crime to continue undetected.

Is there a Defined Idea of Bay of Bengal or a BIMSTEC identity?

There are various definitions of the Bay of Bengal from an [iv]number of sources including Word Atlas, Encyclopaedia Britannica, and International Hydrographic Bureau.

Among these definitions, it is commonly agreed that the Bay of Bengal touches Sri Lanka, India, Bangladesh, and Myanmar. The [v]Agreement on the Institutionalization of the Bay of Bengal Programme as an Inter-Governmental Organisation provides a legal basis for Fisheries Development and Management in the region but does not provide for a defined geographical demarcation for the Bay of Bengal.

Furthermore, some countries of the BIMSTEC are also members of the Indian Ocean Rim Association, Association of Southeast Asian Nations, and even The South Asian Association for Regional Cooperation. These insights are interesting in how the BIMSTEC Member States can develop an identity for the organization and how leadership will emerge. Professor [vi]Baogang He suggests “it is important to cultivate new regional leadership through the development of regional citizenship”.

There is also the possibility for BIMSTEC to become yet another Organization with its Member States being entangled in a web of overlapping security arrangements which will render comprehensive security cooperation redundant. (Referring to the trajectory of African States in the Spaghetti Bowl of Africa which has impeded regional integration and economic development)

Geopolitical and Geo-economic Importance of Bay of Bengal

The [vii]Bay of Bengal lies in proximity to shipping routes opening up to the waters of Atlantic Ocean, Arabian Sea, Red Sea, Suez Canal, and the Mediterranean Sea and strategic straits including Malacca, Sunda, Bali, and the Lombok Straits. These waters are used for transportation of goods, international trade, and other economic activity. These activities span tourism, marine fisheries and shrimp farming, exploration of oil and gas reserves, desalination of seawater for freshwater, energy generation etc.

The Bay of Bengal, according to Kaplan “constitutes a single world of Indian migration throughout maritime Southeast Asia”.  Kaplan opine,

“the entire navigable southern rimland of Eurasia, stretching from the Horn of Africa around archipelagic Indonesia up to the Sea of Japan, is centered on the Bay of Bengal and the South China Sea”

This outlays the strategic importance of the Bay of Bengal. BIMSTEC also contains 1.5 billion people which amount to 21% of the world population and a combined GDP of over US$ 2.5 trillion. In the future, this organization could emerge as a balancer against Chinese rise of power.

This [viii]Convention could be interpreted as a sub-regional arrangement for the control of crimes including international terrorism, transnational organized crime, illicit trafficking in drugs etc. The Agreement, however, does not define the scope of each of these crimes but defines the expected cooperation whereby countries are vested with the role of information sharing. These are contained in Article 3, 4, and 5.

Article 6 provides for cooperation among law enforcement agencies of the State Parties whereby each signatory state is allowed to prosecute these crimes domestically. However for successful control of these crimes domestic legislation should evolve to meet the modern-day challenges.

Article 7 denotes “State Parties shall identify and notify to each other their nodal authorities responsible for cooperation and exchange of information in various areas covered within the scope of this Convention”. For this to be successful each country must have a consensus on what these nodal authorities are: Police, Intelligence agencies of countries, or port authorities or all.

In defining cooperation the convention has mentioned information sharing of ‘activities of individuals and criminal groups engaged in the planning, promotion or execution of acts of transnational organized crime’. This information Sharing could be translated to intelligence sharing. Sri Lanka has been given a unique opportunity to coordinate this through a properly established mechanism following the guidelines for cooperation afforded through the Convention.  These guidelines could navigate the previously mentioned skepticism with regard to intelligence sharing. For example, Article 9 provides for confidentiality and explicitly states “any information provided by a State Party pursuant to this Convention shall be used exclusively for the purpose for which it was provided” Furthermore Article 10 provides a party may deny any request to provide information on grounds of sovereignty.

The Bay of Bengal as a sub-region has been identified as geopolitically and geo-economically important with BIMSTEC emerging as a regional Organization. BIMSTEC Security Cooperation is a new avenue for developing countries with India (a powerful regional actor) among its resource pool. The BIMSTEC Convention on Cooperation in Combating International Terrorism, Transnational Organised Crime And Illicit Drug Trafficking are important on two fronts: intelligence sharing on crime and asserting domestic states to prosecute crime. If the convention has strictly adhered to it can be effective to control crime without fearing the implications that intelligence sharing could have on the sovereignty of a State. Finally, Sri Lanka has secured an important role to coordinate Intelligence sharing as Lead Shepard which creates a need for Sri Lanka as a small state to develop its capabilities to facilitate this role.

[ii] Refer: https://www.wsj.com/articles/u-s-india-sign-military-intelligence-sharing-agreement-1536232640 by Rajesh Roy and Nancy A. Youssef.

[iv] According to World Atlas – “The Bay of Bengal is a northern extension of the Indian Ocean, positioned between India and Sri Lanka in the west, Bangladesh to the north, and Myanmar (Burma) and the northern part of the Malay Peninsula to the east. It’s approximately 1,000 miles (1,600 km) wide, with an average depth near 8,500 feet (2,600 meters). The maximum depth is recorded at 15,400 feet (4,694 meters)”

According to Encyclopaedia Britannica, “Bay of Bengal, large but relatively shallow embayment of the north-eastern Indian Ocean, occupying an area of about 839,000 square miles (2,173,000 square km). It lies roughly between latitudes 5° and 22° N and longitudes 80° and 90° E. It is bordered by Sri Lanka and India to the west, Bangladesh to the north, and Myanmar (Burma) and the northern part of the Malay Peninsula to the east”

According to the definition of the International Hydrographic Bureau, “the southern boundary extends from Dondra Head at the southern end of Sri Lanka in the west to the northern tip of the Indonesian island of Sumatra in the east”

[vi]Refer: Contested ideas of regionalism in Asia – by Baogang He