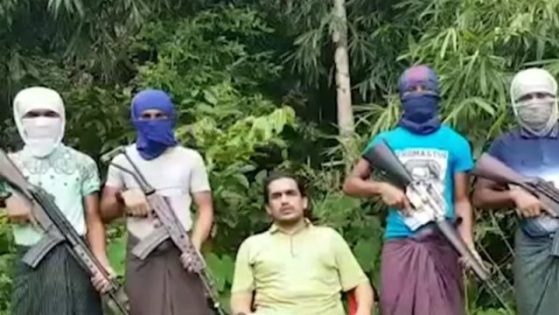 Rohingya Muslim militants unlawfully killed nearly 100 Hindus in Myanmar’s Rakhine state during deadly attacks on police outposts last year that resulted in a violent crackdown and an exodus of refugees into Bangladesh, Amnesty International says in a new report.

The Arakan Rohingya Salvation Army (ARSA) carried out brutal attacks on the Hindu women, men, and children in two villages and abducted residents, said the report, based on photographic evidence and on dozens of interviews in northern Rakhine and in Bangladesh, where hundreds of Myanmar Hindus are living in refugee camps.

“It’s hard to ignore the sheer brutality of ARSA’s actions, which have left an indelible impression on the survivors we’ve spoken to,” she said. “Accountability for these atrocities is every bit as crucial as it is for the crimes against humanity carried out by Myanmar’s security forces in northern Rakhine state.”

The investigation found that ARSA killed 53 Hindus from the Kha Maung Seik village tract in northern Maungdaw township on Aug. 25, 2017, the same day the militant group launched deadly attacks on 30 police outposts in the region.

Another 46 Hindus from neighboring Ye Bauk Kyar (also spelled Yebaw Kya) village disappeared and are believed to be dead.

In September 2017, local Hindus and members of Myanmar security forces unearthed four mass graves containing the remains of 45 massacred Hindus, later identified as residents of Kha Maung Seik village tract or people who were visiting the community at the time of the attack. The bodies of the other eight people who were killed have not been found, the report said.

Amnesty International also documented ARSA’s involvement in other killings and violent attacks against members of other ethnic and religious communities, including the murders of six Hindus and the injuring of another on the outskirts of Maungdaw town near Myo Thu Gyi village.

ARSA has denied responsibility for the attacks, blaming them instead on ethnic Rakhine who lived in the multicultural communities along with Hindus and Rohingya.

Until now, rights groups and members of the international community have blasted the Myanmar government for not allowing U.N. investigators and independent media outlets into northern Rakhine to probe the campaign against the Rohingya following the August 2017 attack by ARSA, and a smaller-scale assault by the group on border outposts in October 2016.

Myanmar and the army have vehemently denied allegations that security forces indiscriminately killed, tortured, and raped Rohingya and burned down their homes, despite statements by the United Nations and others that the crackdowns, which together drove nearly 800,000 Rohingya across the border to Bangladesh, amounted to ethnic cleansing.

On Wednesday, Ni Maul, a Hindu social worker and local community leader who first reported the massacres of the Hindus found in mass graves, told the Myanmar Service of Radio Free Asia (RFA) – a sister entity of BenarNews – that he already knew that ARSA had slain dozens of Hindus from the two villages on the same day in August 2017, though he put the total number of Hindus killed at 122.

“We were sad to see many people killed … I helped government authorities find the bodies and submitted a report, saying how many people were killed and how many were missing, but we never received any response from the government about it, and we don’t know what the international community will do now that it knows what ARSA did to these people,” he said

Though some members of the international media on government-supervised trips, rights organizations, and a group of diplomats from the U.N. Security Country were allowed to visit ethnic communities in northern Rakhine, including Hindu communities, and to interview many people, none of them issued any statements about ARSA being responsible for the attacks, he said.

Meanwhile, the government has been providing protection for eight young Hindu women who witnessed ARSA’s attack on their fellow villagers in Kha Maung Seik, he said.

The militants had forced the women to convert to Islam and took them and eight of their children to a refugee camp in Bangladesh, where the women were forced to issue statements on social media that Rakhine ethnics were responsible for the attack. Myanmar and Bangladeshi forces tracked down the women and children and repatriated them in October 2017.

Ni Maul said the government had agreed to take back the more than 400 Hindus still in camps in Bangladesh.

Though the Myanmar government has repeatedly rejected reports and evidence of atrocities committed by government soldiers against the stateless and persecuted Rohingya during the violence in Rakhine state, observers said Amnesty International’s new report would be welcome.

“Although Amnesty International’s report came out late, it is better than remaining ignorant about the Rakhine problem,” he told RFA. “We can even say it is a good sign.”

Diplomats from the U.N. Security Council who visited Rohingya refugee camps in Bangladesh and areas in northern Rakhine state affected by violence had seemed not to accept what Myanmar officials told them about the ARSA attacks on ethnic minority communities, Ye Htut said.

“Now that Amnesty International has agreed with this, Myanmar will have better communication with the international community, diplomatically speaking,” he said.

Pyi Thway Naing, editor-in-chief of Myanmar’s Khit Yanant magazine, said the report showed that the government must allow independent media and others to visit Rakhine and look into the accounts of killings and other abuses committed.

“A report by a famous human rights organization like Amnesty International provides strong support [as an indication of] Myanmar’s general crisis,” he said.

Though the government opposes accusations by the international community that it has caused the problems in Rakhine state, it can’t dispute the evidence in the report, he said.

“The Myanmar government should allow international media and organizations to travel to conflict areas,” said Pyi Thway Naing. “If it does, we will have real evidences such as that which Amnesty international has in the report.”

“When the government finds out who committed crimes, it must take action against them, including ARSA, people from the military, or the police,” he said. “If the government can’t do this, it will face more hardship and problems.”

Earlier this month, Amnesty International was among four human rights groups that called on the U.N. Security Council to refer Myanmar to the International Criminal Court (ICC) over the crackdown on the Rohingya, saying the violence amounted to crimes against humanity.

The appeal came a week after U.N. Security Council envoys visited Myanmar and Bangladesh to assess the situation on the ground in Rakhine state, after which they called for a “proper” investigation into the events surrounding the Rohingya exodus.

Myanmar can set up such a probe through an ICC referral or by holding its own comprehensive inquiry.

The call by the rights groups came a month after an ICC prosecutor asked the international tribunal to rule on whether the court can exercise jurisdiction over the alleged deportation of the Rohingya from Myanmar to Bangladesh.

Myanmar argued that because it is not a member of the ICC, such a move would undermine its charter and run against the Netherlands-based ICC’s charter.

On Wednesday, Zaw Htay, director general of State Counselor Aung San Suu Kyi’s office, repeated the government’s previous response that the ICC had no jurisdiction over Myanmar, which is not a member of the 123-party body.

“The ICC has no jurisdiction, and we will not accept any action it takes against Myanmar,” he said at a press conference in Naypyidaw.

“ICC member Bangladesh has no jurisdiction concerning Myanmar because Myanmar is not an ICC member,” he said.

Whenever the government has concrete evidence of abuses or crimes committed in Rakhine during the crackdown, it will investigate it and take action against the wrongdoers, Zaw Htay said, adding that military commander-in-chief Min Aung Hlaing told the U.N. Security Council envoys to provide such proof if they had it.

“We have been saying the same thing since we started having problems in Rakhine state,” he said. “Though Myanmar is not opposed to investigating and taking action against people who committed crimes, the ICC cannot take any action. It is impossible.”

“We don’t deny that we have human right violations in Myanmar, but please provide us with concrete evidence,” he said.