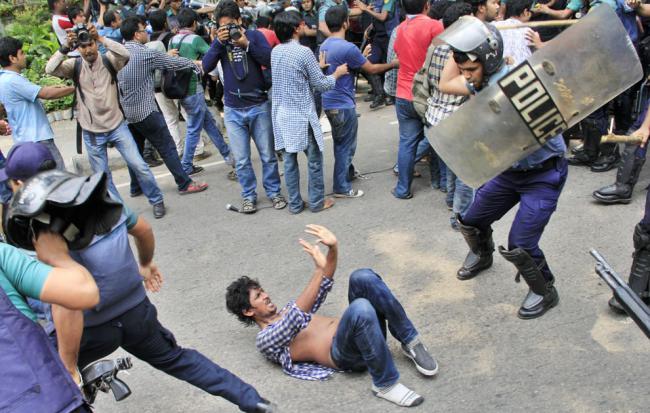 Not selective justice but democracy and rule of law, the answer

The spate of killings that have gripped Bangladesh lately and especially those that relate to the killings of atheist bloggers, a sufi, an alleged Islam bashing Hindu in a village and a homosexual and his friend (the homosexual, an employee of Dhaka USAID office) and lately, a 75 year old Buddhist monk in a remote Hill District have caused much concern especially those of the foreign governments and their press. Foreign governments also claim that external elements like ISIS and their Bangladeshi cohorts are responsible for these blogger and minority killings which the Bangladesh government denies. Government puts the blame quietly strangely if not falsely on the opposition political parties. In recent times and thanks to government’s horrendously brutal repressive measures opposition in Bangladesh has been subdued to such an extent that it is more conspicuous by its absence than by its presence, they are visible either through occasional press statements that their leaders release to the media from time to time or through photographs in newspapers showing their leaders attending courts to numerous criminal cases, mostly false, that the government has lodged against them.

Unlawful killings and unsolved murders and other unresolved criminal activities are nothing new in Bangladesh. For quite some time and especially since 2014, from the time this government declared itself ‘elected’ in a no-show election (fearing rigging and justifiably so, main opposition party boycotted election) killings, enforced disappearances, routine arrests and torture of political rivals and incidence of numerous other unsolved murders, rapes etc. have become so regular and happen with such impunity that Bangladesh looks more like a free market for killers and rapists.

In this environment of continuing killing and repression of political adversaries as well as other unsolved murders, rapes etc. blogger killings though are regrettable and must be condemned in no uncertain terms ought not to be taken as isolated events. In fact these killings are more of a symptom of breakdown of rule of law than as some claim – the rising spectre of fundamentalism in the country. Blogger killings constitute only a small part of the sordid crimes – some are either state organized or state endorsed – that bloody Bangladesh on a daily basis. These crimes mostly get either poorly reported or not reported at all in foreign press. Foreign governments also seem to show some degree of ambivalence and are less inclined to condemn and demand justice for these crimes that are eroding the very foundation of the society and its harmony.

Bangladesh is experiencing a governing arrangement that uses its law enforcement agencies to take part, directly or otherwise, in killing and torture of its opposition and in the process contribute to an environment where criminals of all sorts and crimes of all kinds occur freely with impunity. In this situation, asking for justice for one type of unlawful killings, namely blogger killing and not the other is not only hypocritical but counterproductive as well.

Many argue that foreign governments’ (West and its allies) cherry-picking approach to justice has to do nothing with improving the death and repression culture that rage in Bangladesh on a daily basis but to advance further alliance’s geopolitical interests. In order to do this they looked for a government that is more obliging than sovereign and more ‘secular’ than Islamist/nationalist. Current Bangladesh government played the secular card quite successfully and took full advantage of international community’s (countries that wage ‘war-on-terror’) see-no-evil-hear-no-evil policy to repress and subdue nationalist opposition that espouse Islamic orientation in their political agenda and bring the country to a state of lawlessness that allowed the government to get away with murder, literally and the country a killing field.

Furthermore, government’s aggressive pollicisation of its law enforcement agencies that has since been used as uniformed hit-men of the government, has made these agencies not only totally murderous but also corrupt, incompetent and self-seeking.  Thus in a situation where virtually there is no rule of law and opposition politics is virtually non-existent it is hardly a surprise that as is observed by the Economist, “With mainstream political competition foreclosed, extremist fringes are likely to thrive.”

Indeed, in this emerging scenario of self-seeking politics where lines between the party interest, the legislature, the executive, the judiciary, the geo-politics and personal and party interests etc. are becoming thinner and space of freedom narrower and the aspect of accountability extinct and where institutions and their operational integrity are regularly trampled and democratic values viciously compromised and where criminals kill each other’s adversaries at will the challenge is not what happened in the past weeks but in years of governance dysfunction where safety and security of all individuals – opposition, atheist bloggers, critiquing journalists, innocent people etc. etc. – is under threat. Here, depending on the victim, either government itself is an accomplish in or thanks to politicisation where loyalty over quality characterizes the law enforcement agencies has simply lost the capacity to stop and investigate crimes properly.

I this situation of falling standards of rule of law, it would be a mistake to treat the current spate of blogger and minority killings as a sign of rise of extremist Islamist militancy in Bangladesh. It is not. Rather blogger killings are both a cause and effect of breakdown of rule of law and loss of practice of accountability in the country. After all, average Bangladeshis, 90% of whom are Muslims are by no means fanatics but are pious and tolerant Muslims who see government’s harsh treatment of Islamist/nationalist opposition parties a deliberate attempt to stay in power by appeasing its foreign backers that are engaged in a ‘war-on-terror’ that targets Muslims, worldwide.

Mr. William B. Millam, the former US Ambassador to Bangladesh correctly assessed the situation when in a recently published article in New York Times he observed that “The Awami League’s [ruling party] relentless campaign against the political opposition and civil society has allowed violent radicals of all stripes to let loose”. In this situation, asking for selective justice for one particular type of killing – namely blogger and minority killing, something that foreign governments are demanding – and not seeking remedy for the overall governance collapse that has contributed to a ‘culture of impunity’ that has infected the very heart of Bangladesh society in the first place is not only hypocritical but dangerously counterproductive for such a biased demand for justice will simply deepen a raging suspicion that the West and its allies are interested in partners that hurt Islam and subdue their nationalist aspirations and not in issues that hurt the entire nation day in and day out. Such a myopic approach is likely to backfire and feed more into the seething mass discontent that rage below surface and fill the very ranks of terrorists that everyone especially the foreign patrons are concerned about and are trying to root out.

Therefore, if one is serious about remedying Bangladesh’s rising addiction to violence that is perpetrated by both the state as well as the non-state actors the first and foremost task is to fix country’s non-functioning governance and re-instate rule of law through a government that is elected in a free and fair election, keeping in mind that should such an election be held it must not be allowed to be administered by the current government that enjoys zero credibility in most matters especially in election governance and the fact that the government is also proposing new laws that promise further curtailment of space of freedom is hardly reassuring.

In this regard it is also important to mention and this is particularly true for those foreign governments that take interest in Bangladesh. They must appreciate that regardless of who gets elected in a free and fair election,  a so-called secular ( no ‘secular’ party can do business in Bangladesh by hurting or perceived to be hurting the religious feelings of its majority people that are Muslims) or a party with Islamist orientation ( on the other hand, no Islamic or nationalist party that espouses the idea of fundamentalist Islam will ever have a place in Bangladesh and this has been proven in numerous elections where hard-core Islamic parties never got more than 4-5 seats in the parliament), they should be prepared to do business with it fairly and equitably emphasizing that the newly elected government promises and adheres fully to the principles of transparency, accountability, human rights, religious tolerance and social justice in governance.

Views expressed in this article are those of the author’s