The Tragedies of Other Places 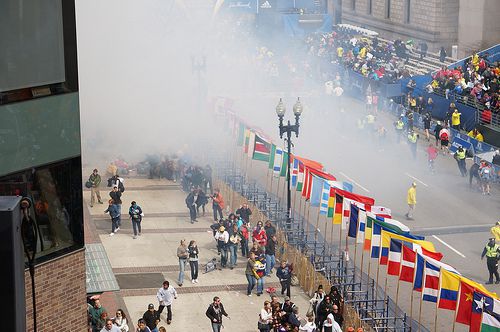 Rafia Zakaria writing in Guernica about the recent bombing in Boston:

As The bombings in Boston on April 15, 2013 pose their own conundrum to those like me who are in the habit of writing about bloodier conflicts with more frequent conflagrations. There is an inherent cruelty in every terror attack—an undeniable reverberation of evil in the destruction of an ordinary moment and the forced marriage of that moment to sudden violence. Boston is no different, no more
or less tragic than the bombings that have razed the marketplaces of Karachi, the school in Khost, the mosque in Karbala.

American tragedies somehow seem to occur in a more poignant version of reality… within minutes American victims are lifted from the nameless to the remembered.

And yet it seems so. Attacks in America are far more indelible in the world’s memory than attacks in any other country. There may be fewer victims and less blood, but American tragedies somehow seem to occur in a more poignant version of reality, in a way that evokes a more sympathetic response. Within minutes American victims are lifted from the nameless to the remembered; their individual tragedies and the ugly unfairness of their ends are presented in a way that cannot but cause the watching world to cry, to consider them intimates, and to stand in their bloody shoes. Death is always unexpected in America and death by a terrorist attack more so than in any other place.

It is this greater poignancy of attacks in America that begs the question of whether the world’s allocations of sympathy are determined not by the magnitude of a tragedy—the numbers dead and injured—but by the contrast between a society’s normal and the cruel aftermath of a terrorist event. It is in America that the difference between the two is the greatest; the American normal is one of a near-perfect security that is unimaginable in many places, especially in countries at war. The very popularity of the Boston Marathon could be considered an expression of just this. America is so secure and free from suffering that people have the luxury of indulging in deliberate suffering in the form of excruciating physical exertion; this suffering in turn produces well-earned exhilaration, a singular sense of physical achievement and mental fortitude. The act of running a marathon is supposed to be simple, individual—a victory of the will over the body, celebrated by all and untouched by the complicated questions of who in the world can choose to suffer and who only bears suffering.

The innocence of marathon runners and their
expectations of a finish line, a well-earned victory, are markers of an America that still believes in an uncomplicated morality even while it is at war.

When terror hits the site of such faith in human fortitude, the impact is large. The innocence of marathon runners and their expectations of a finish line, a well-earned victory, are markers of an America that still believes in an uncomplicated morality even while it is at war. The runner runs, sweats, suffers, and deserves the prize; the messiness of the world has no place in that vacuum of earned achievement where victory is straightforward in a way that it can never be in actual life. The rest of the world is a more complicated place; its people are forced to digest more complicated truths whose vast gray areas rob every tragedy of the pathos available to Americans living and mourning in a universe of black and white.