Prospect of a SAARC Power Grid 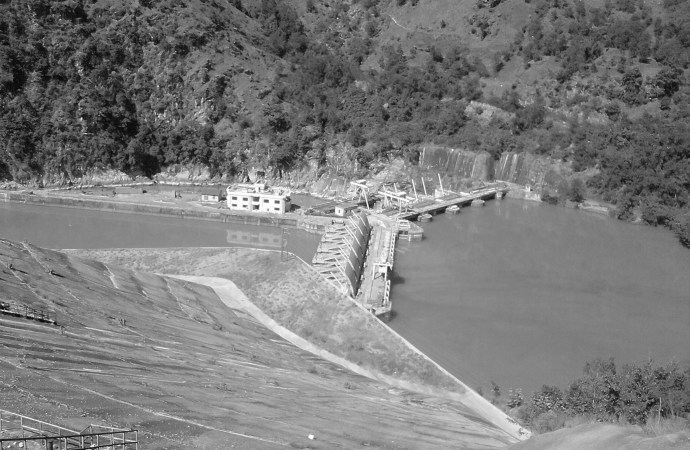 The South Asian Association for Regional Cooperation (SAARC) comprising India, Pakistan, Bangladesh, Sri Lanka, Nepal, Bhutan and Maldives began in 1985 with the objectives of promoting the quality of life and economic growth in the region, to strengthen collective self-reliance, to encourage active collaboration in economic, technical and scientific fields and increase people to people contacts and share information among the SAARC members. Afghanistan later joined SAARC as a full member.

The combined economy of SAARC is the third largest in the world in terms of GDP after the United States and China. SAARC nations comprise 3% of the world’s area and contain 21% (around 1.7 billion) of the world’s total population.

Supply of uninterrupted electricity is an essential prerequisite for economic development. The SAARC region is generally deficient in fossil fuel reserves. India, Bhutan, Nepal, Pakistan and Afghanistan, however, have significant potentials for generation of hydro-power. Most of the available hydro potentials still remain untapped.

Consequently, almost all the SAARC countries are deficient in production of electricity. Load shedding for hours is common in Pakistan, India, Nepal and Bangladesh. Table 1 shows the energy resources and Table 2 the per capita GDP, per capita energy and electricity consumption and installed generation capacities of the SAARC countries. The tables are based on information available with the World Bank, EIA, CIA and individual country reports. The data may not relate to the same year. 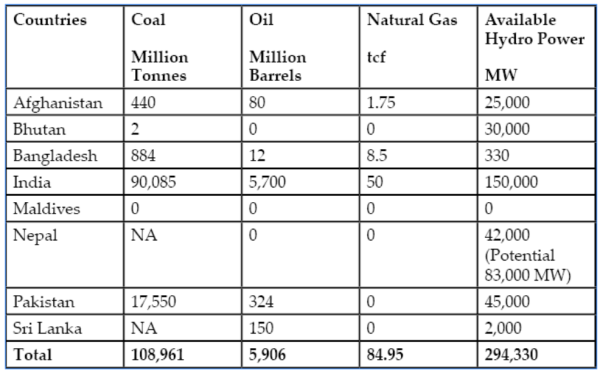 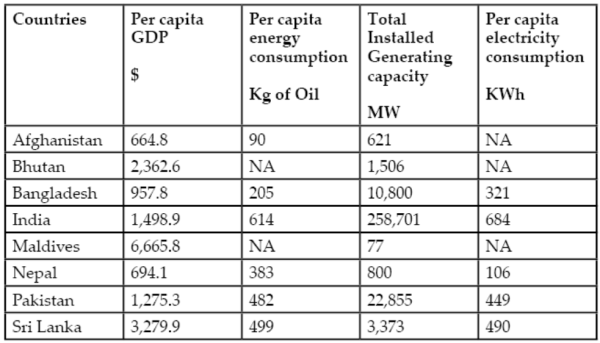 The concept of a SAARC power grid had been in the minds of policy planners of the region for many years but progress in materializing the concept has been slow, mainly because of lack of political will among some of the countries. Occasional conflicts and mistrust among some member countries have been hindering cooperation among them while some members are building hydro and coal based power plants and transmission lines in the region through bilateral and trilateral agreements. Some of the national grids have, however, been interconnected across borders forming part of what may ultimately emerge as a SAARC Power Grid. The energy and power situations of the individual SAARC countries and their current efforts to interconnect their grids with those of the neighboring countries are described below.

Afghanistan generates about 600 MW of electricity, mainly from hydropower followed by fossil fuels and solar energy. Two decades of warfare have badly damaged the country’s power grid. As of 2012, approximately 33% of the Afghan population had access to electricity. It is estimated that the country will need around 3,000 MW to meet its needs by 2020. Afghanistan intends to use wind and solar energy as part of their national policy. The country is linked with Uzbekistan by a 442-km high voltage transmission line with a capacity of 300 MW. It runs from Kabul towards the country’s border with Uzbekistan and connects to the Uzbek electricity transmission system. Following the interconnection, the electricity supply to Kabul improved significantly. Even though Afghanistan has a long border with Pakistan, interconnection between the two neighbors is unlikely in the near future because of the prevailing political turmoil in the region.

Commercial energy in Bangladesh includes natural gas, imported oil, coal, hydro and solar energy. Noncommercial energy sources such as wood fuel, animal waste and crop residues account for about 50% of the total energy consumption. Bangladesh had good deposits of natural gas, most of which has been exhausted. There has not been any discovery of any new gas field in Bangladesh in the recent past. The coal deposits are situated deep underground. Only one coal mine has been tapped with limited production. The hydro potential is fully utilized. The government is constructing large power plants based on imported coal, LNG and nuclear energy. There is a proposal to import natural gas from Myanmar for use in Bangladesh and India. Small solar panels are used in large numbers in remote areas.

At present, the installed generating capacity of Bangladesh is 10,800 MW of which only three-fourth is available. As a result, the available generating capacity is unable to meet the peak demand. To meet the shortfall, the government has been purchasing expensive electricity from small oil based rental power plants. Natural gas accounts for 62% of total electricity generation. The rest of the electricity is generated by imported oil (29%), local coal (2.3%) and hydro (2.1%). 4.6% electricity is imported from India.

At present, India supplies about 500 MW of power to Bangladesh. This quantity is likely to increase in the near future. It was reported in 2011 that Nepal and Bhutan agreed to export 2,000 MW of electricity to Bangladesh, 1,000 MW each from Saptokoshi project in Nepal and Sankosh project in Bhutan. Bangladesh is already interconnected with India through a 400kV d/c line between Bheramara (Bangladesh) and Baharampur (India). Bangladesh is likely to be linked with the grids of Bhutan, Nepal, Tripura (India) and also with Myanmar and Thailand through the Bay of Bengal Initiative for Multi-Sectoral Technical and Economic Cooperation (BIMSTEC).

Bhutan has no petroleum or natural gas reserves but has large hydro potential estimated to be over 30,000 MW. The kingdom has 1.3 million tonnes of coal and extracts only about 1,000 tonnes per year for domestic use. Bhutan also imports oil at about 1,000 barrels per day mostly for automobiles. It generates its electricity primarily from hydro-power plants. It has undertaken several hydro-power projects in collaboration with India which had committed huge financial support. India is aiming to import up to 10,000 MW of power from Bhutan by 2020, up from earlier estimates of 5,000 MW. Bangladesh also wants to import electricity from Bhutan.

India is the largest country in the region both in terms of population (1.2 billion) and area (3,287,590 sq km). It has substantial deposits of coal (90,085 million tonnes) and huge hydro potential (150,000 MW) as shown in Table 1. It also plans to import natural gas through pipelines from the Middle East, Central Asia and Myanmar. It is investing heavily in nuclear power and solar energy. It is the third largest producer of electricity with an installed generating capacity of 258,000 MW. It has a large program of investment in harnessing its own hydro potentials plus those of Nepal and Bhutan. Its northern power grid is now linked with the southern grid. The northeastern grid of India is linked with those of Nepal, Bhutan and Bangladesh. It is also planned to interconnect its southern grid with that of Sri Lanka by a submarine cable.

With an area of 298 sq km and a population of only 341,350, Maldives is the smallest member of SAARC but it has the highest per capita GDP of $6,666. The main source of income is tourism. It is an island nation in the Indian Ocean consisting of twenty-six atolls and situated about 750 km away from the nearest Indian coast. The country has no indigenous energy resources and is dependent on imported fossil fuels. It has a total electricity generating capacity of 77 MW. Because of its location, the possibility of its interconnection with any other member state is remote.

Pakistan has good deposits of coal and natural gas and substantial hydro potential as shown in Table 1. The present installed generating capacity of Pakistan is 22,855 MW of which oil accounts for 35.2%, natural gas 29%, hydro 29% and nuclear 5.8%. The available generating capacity is unable to meet a demand of about 17,000 MW leaving a gap of up to 6,000 MW. Long hours of load shedding have been common in Pakistan for many years. Pakistan does not import or export electricity. A proposal to link the power grid of Pakistan with that of India has been under consideration with little progress to date.

With no coal or natural gas, Sri Lanka has limited hydro potential of 2,000 MW and a small oil reserve of 150 million barrels. At present, hydro power accounts for 48% of the country’s generating capacity and 58% of electricity production. The rest of the electricity is produced by oil, naphtha or coal. Sri Lanka has a long-term plan to build nuclear power plants. A proposal for interconnection of its grid with that of India by a submarine cable is under consideration.

The interconnection of electrical grids through high voltage transmission lines across international boundaries is standard practice all over the world. The largest interconnected grid is the synchronous grid of Continental Europe (UCTE). The Eastern Interconnection covers eastern US and Canada. The widest area is served by the IPS/UPS system serving the countries of the former Soviet Union. Other major interconnected grids include the Western Interconnection serving western US, Canada and north-western Mexico, the Nordic countries synchronous zone, Ireland and Great Britain synchronous zone among others. European grids operate on a system frequency of 50 Hz whereas North American grids operate on 60 Hz. Though grids with the same operating frequency are normally interconnected, it is possible to link systems with different frequencies through DC transmission lines or variable frequency transformers.

Interconnection of regional power grids improves stability and reliability of power supply, reduces the requirement of expensive cold and hot reserves and allows the construction of larger and more economic central power plants resulting in overall improvement of economy of the systems. Since SAARC countries are situated in different time zones, peak demand of electricity occurs at different times in different countries. Moreover, Nepal has its annual peak in winter while India, Pakistan and other countries have their yearly peaks in the summer. Nepal can, therefore, supply surplus power to neighboring countries during the summer while receiving the needed power from them during the winter.

These factors help in efficient and economic load dispatch across international borders without the necessity of building expensive peaking power plants. It is, therefore, logical that some of the SAARC countries, particularly those in the eastern region, are keen to develop a SAARC power grid and cooperate in sharing energy resources. All the power grids among the SAARC countries operate on a system frequency of 50 Hz. This will make the interconnection of the grids much easier.

As shown in Table 1, India and Pakistan have good deposits of coal and natural gas.  Bhutan, Nepal and Maldives have practically no deposit of fossil fuels. Because of the paucity of energy resources in the region, large quantities of fossil fuels are imported to the region. India is building coal based power plants in Bangladesh under bilateral agreements. Several projects are under implementation for building hydro-power plants in Bhutan and Nepal with technical and financial assistance from India. It will require high voltage and high capacity transmission lines to transport electricity to India and Bangladesh. India has the technical knowhow and financial resources to build hydro-power plants. Bangladesh can cooperate with India in building such plants with its experience of construction and operation of hydro-power plants.

Since most of the SAARC countries (excluding Pakistan and Afghanistan) are also members of BIMSTEC and with the factors of close proximity and better cohesion among BIMSTEC and some SAARC countries, cooperation among them on energy and electricity is progressing at a faster rate. There is, therefore, every possibility of integrating the SAARC power grid with that of BIMSTEC in the near future.  We must keep in mind that the ultimate goal of the SAARC countries should be to connect its grid not only with that of BIMSREC but also with the power grid in Central Asia which is rich in natural gas reserves.

Building infrastructures, like power plants and transmission lines, requires huge capital investments in billions of dollars, which is perhaps beyond the financial resources of the member-states. Any largescale development of the power sector in the region will, therefore, require massive financial assistance from international donors like the World Bank, Asian Development Bank and the newly-launched Asian Infrastructure Investment Bank plus other development partners. Any investment in the energy and power sector will, however, be small compared to the benefits in terms of economic developments it will bring to the whole region.