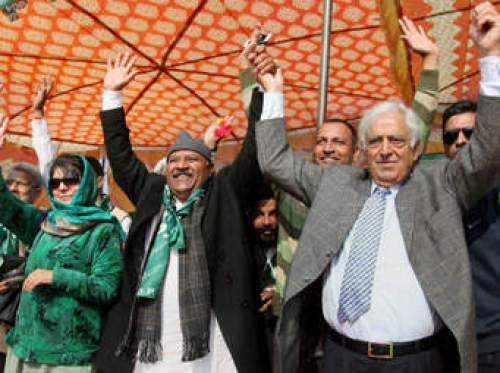 “The idea that two political parties can’t come together to get a mission done is foreign to me and unacceptable.”

Thomas Jefferson to Maryland Republicans in 1809 said. “The care of human life and happiness and not their destruction is the first and only legitimate object of good government.” The longtime strip – torn Jammu and Kashmir State has lost the prospect of a new beginning with what we call “Agenda of Alliance,” ideas and the possible good governance of PDP. During election campaigns across Kashmir, the main political agenda of PDP was “Self-rule,” revoke AFSPA, release of all political prisoners, talk with separatists and the battle against corruption but shared alliance with BJP, after the poll verdict. The election manifesto and the promises of the said party are droning from the day one of the alliance and have affected the PDP negatively and poorly. Thus, it seems that the People’s Democratic Party will drown itself in the confluence of the two rivers, Jhelum and Chenab. What a paradox? Moreover, it was the same party who were beating the drums of to keep BJP at bay but after all what people of the state witnessed is clearly visible.

The PDP was the largest political party that had mammoth signboards and preponderance presence in the city of Srinagar, scores of towns, villages and hamlets, scattered in all the nooks and crannies of Kashmir valley, especially in South Kashmir which is known as base belt of the PDP, Indeed the patron of the party (late Mufti Mohammad Sayed) and other founding members were from South. However, since the creation of political corridors in J&K the PDP being one of the dominant regional Parties was the much bigger and stronger political adversary of the NC as compared to State Congress party, because of its vibrant connotations and the ascendancy of the time. Plus party used the symbols of the green flag and ink pen combination which have a profound psychological and emotional imprint on Kashmiris as once the same symbol was used by MUF (Muslim United Front) when it contested the 1987 historical rigged and manipulated election.

Is the PDP an imaginary paradox of Goliath? If the hypothesis is accepted then it can be used as a tentative theory, a proposal intended to explain certain facts and observations in the polity, including the two years political ups and downs in the governance of the PDP from 2014 to 2017. Pertinent to mention here that it’s coalition partner BJP from last more than two years who are silently carrying out their agenda of politics but on the other hand PDP is dying in snails race. They had miserably failed to fulfill the political promises, and it’s what they call “Agenda of Alliance” for the people of Kashmir and are over – powered before the soaring agenda of BJP in the state. Perhaps it would not be wrong to say that BJP made PDP as a handicapped and a broken political entity in Kashmir for coming years.

The People’s Democratic Party (PDP) will gradually fade away if its ethos of anti-people centrism persists and The PDP is going through the process of ‘paradoxical sleep,’ a recurring sleep state during which dreaming occurs and nothing else. It’s because of its weak and unaccountable politics in Kashmir and the upper hand over the people which followed the resignation of Parliamentarian Tariq Hammed Karra from the party and other cabinet ministers from the government. These small and big upheavals indicate that the present developments in the People’s Democratic Party are not well within the party which is the misfortune for PDP.

The political scientist Harold Laswell defines politics as “Who Gets What, When, and How” President of PDP and the present CM of J&K who diplomatically conceded win may have redefined Laswell’s definition when she shouted “PDP can’t form a government just for the sake of power but, if it does, it will be, as envisioned by Mufti Sahab, with the objective of addressing the core political and economic issues confronting J&K as was done by the PDP-led government between 2002 and 2005,” she asserted. She said the Modi government would have to take substantive measures towards implementation of the PDP-BJP Agenda of Alliance and her PDP “needs a set timeframe to be worked out, ” but No PDP member suggested to CMs defeat of Agenda of Alliance and BJPs victory as an alliance partner. Despite, the paradox here is that PDP is the largest party in J&K assembly but the political and unexpected behavior of PDP is changing colors and is transiting towards the decline in future politics of state as an alternative political force which many political scientists like Rekha Choudary consider in their writings. It is too late now for Mehbooba Mufti as President of the party and CM of the State to review her position and work on the empty promises which she made with the people of the state before and after the alliance with the soaring BJP partner in the state politics. A famous political and social scientist Chris Gibson is right when he said “The idea that two political parties can’t come together to get a mission done is foreign to me and unacceptable. Same goes for present coalition government. The time is not far when the party (PDP) will meet with the same fate as NC savored.