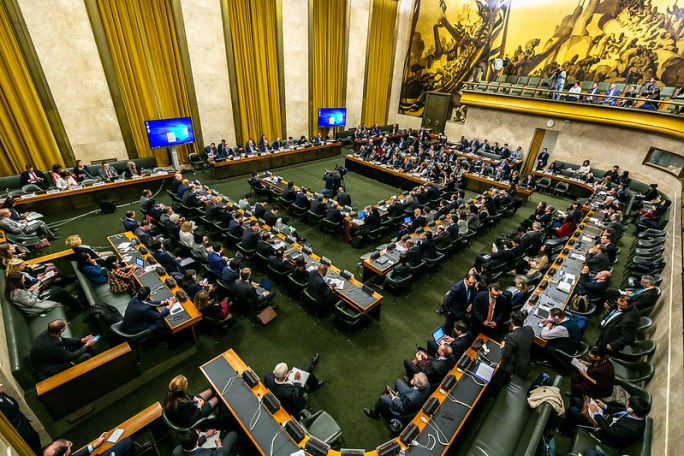 Ever since Pakistan became a nuclear weapon state, Pakistan’s nuclear diplomacy has been in practice on the principles of restraint and responsibility. Pakistan was even reluctant to enter the club of nuclear weapon states but soon after India had conducted its first nuclear test in the year 1974, going nuclear became Pakistan’s strategic compulsion. India’s series of nuclear tests in 1998 had compelled Pakistan to demonstrate its nuclear weapon capability accordingly to restore the strategic balance in South Asia. The development of Pakistan’s nuclear weapon capability primarily serves the purpose of a credible and reliable defence against the existential threat from India and to maintain peace and stability in the region. After the inevitable nuclearization of South Asia, Pakistan has never been a part of any arms race in South Asia.  Pakistan can neither afford and nor have an intent to indulge in an arms race in the region This is evident from the very fact that Pakistan has always been open for dialogues and arms control initiatives at the regional and international levels. In this regard, Pakistan’s recent proposal at the Conference on Disarmament (CD) in Geneva is also part of its responsible nuclear diplomacy to urge the international community to take steps and develop consensus on arms control and disarmament. These factors show Pakistan’s commitment and adherence to achieve the goal of nuclear non-proliferation.

As part of its non-proliferation efforts, in the past, Pakistan had also proposed various Confidence Building Measures (CBMs) at the regional level. For instance, in 1974 Pakistan had proposed to make South Asia a nuclear-weapon-free zone (NWFZ), in1978 proposal for the joint Indo-Pak declaration renouncing the manufacture and acquisition of nuclear weapons was presented. Similarly, in 1979 Pakistan had proposed the mutual inspection of each other’s nuclear facilities to build confidence and promote transparency. Moreover, being a responsible international player, in 1979 Pakistan had proposed to simultaneously sign the Non-Proliferation Treaty (NPT) along with India as non-nuclear-weapon states. In 1988 Pakistan had proposed a bilateral treaty to ban the nuclear tests to elude overt nuclearization and reduce the nuclear risk. With the high risk attached to the emerging technologies and delivery systems, in 1994 Pakistan had proposed the South Asia zero-missile zone. Hence over the period, Pakistan has continued its efforts towards nuclear CBMs by proposing various regional and bilateral non-proliferation initiatives. These were aimed at strengthening strategic stability and to reduce the risk of any nuclear conflict in the region. Unfortunately, India has always shown a negative attitude to all such proposals and disrupted various technical, political, and strategic level talks on nuclear CBMs. This historical evidence further validates Pakistan’s appropriate nuclear diplomacy and enhances its credibility as a responsible nuclear-weapon state.

In continuation of its responsible nuclear diplomacy, most recently at the plenary meeting of CD, being held in June 2020, Pakistan has put forth its concerns regarding the nuclear disarmament. While speaking at the conference, Pakistan’s permanent representative to CD Ambassador Khalil Hashmi deliberated upon that with the emerging global conflicts, the consensus on non-proliferation and disarmament has also abraded. The likelihood of a resumption of nuclear testing by countries like the USA, Russia, and India and increased prospects of nuclear use has made the global arms control regime dormant. The increasing trend of double standards and discrimination of the western countries was also highlighted. It was pointed out that the politics of granting waivers to certain states particularly India serves as one of the reasons that the confidence in the nuclear non-proliferation regime has eroded. India’s aspiration of regional hegemony and aggressive military posture against Pakistan are the main contributing factors towards instability and turbulence in South Asia. Moreover, India’s non- compliance with international law has emboldened it to intimidate its neighboring countries and to continue its brutalities in the Kashmir region. India’s irresponsible and incendiary rhetoric combined with its enhanced and aggressive nuclear capabilities is a huge threat to regional peace and security.

To address the above concerns, Pakistan has outlined eleven points roadmap to build the global consensus on non-proliferation. Some of the important steps include; the ‘right of equal security for all states’ in both conventional and non-conventional domains at the national and international levels. The SSOD-I (Special Session on disarmament) has unanimously agreed to this principle of equal security. This shows that Pakistan’s nuclear diplomacy and its non-proliferation efforts have been acknowledged at such an international forum. Another pragmatic step would be that through a non-discriminatory Fissile Material Treaty, all the states must eliminate the current fissile material stock and abandon future production. Likewise, all non-nuclear-weapon states must be provided with security assurances until nuclear disarmament is achieved. A non-discriminatory and universal agreement must be developed to address the concerns regarding the proliferation and development of ABM (Anti-Ballistic Missile) systems. Furthermore, there is a need to strengthen laws to prevent the militarization of outer space and development of LAWS (Lethal Autonomous Weapons System) to be brought under international regulation. Hence to deal with the existing and future challenges to nuclear non-proliferation, international efforts are needed to rethink and re-evaluate the foundations of the non-proliferation regime.

Hence, in this nuclear age, global strategic stability cannot be achieved through discriminatory non-proliferation measures. There is a need for an enabling environment at both the global and regional levels for successful nuclear non-proliferation engagements. In South Asia, India’s offensive doctrines of a limited war under a nuclear overhang, nuclear brinkmanship, and notions of a splendid first strike have posed a serious threat to regional security. In this regard, CBMs and crisis control along with nuclear risk reduction are direly needed to help reinstate a stable regional nuclear order. This would likely serve the key to enduring peace and stability. Despite India’s perilous and pessimist role in the non-proliferation realm, Pakistan should continue to act responsibly and maintain a constructive and responsible nuclear diplomacy.