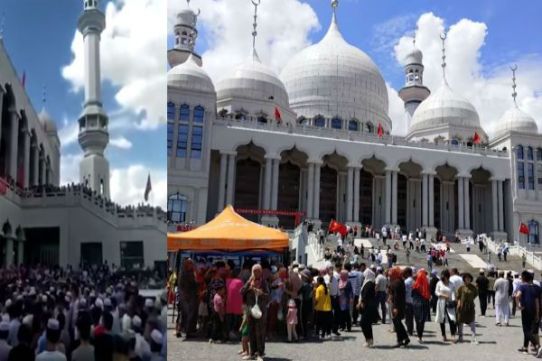 Problems in China’s restive northwest province of Xinjiang have long been simmering, but recent developments point to growing troubles, as news reports and statements by international organizations have significantly raised public attention.  Beijing is engaged in programmatic efforts to suppress the ethnic identity of the Uighur people, a population of 11 million, while combatting their aspirations for political autonomy or even independence. Extensive high-tech surveillance mechanisms are in place, closely monitoring movement throughout the region, and reports are now circulating on the development of a mass incarceration strategy, with reportedly one million Uighurs held in “political reeducation camps.” Beijing is augmenting a policing policy of suppressing activism with a strategic effort of demographic reengineering, designed to dilute Uighur identity while promoting the growth of the Han population. Whatever the Chinese end-game may be, its mistreatment of the Uighurs, its large Muslim population in Xinjiang, has a number of different and sometimes competing dimensions, all relevant toward the formulation of potential American strategic options.

Firstly, conditions in Xinjiang constitute a human rights catastrophe of the highest order. The programmatic efforts to curtail the practice of Islam represent incontestable denials of the freedom of religion, exacerbated by curtailments of political expression. Reports of physical abuse in the “reeducation camps” can only be described as torture, part of the broader picture of surveillance, suppression and violence. The campaign against the Uighurs is a reminder of the nature of the Communist regime: the truth of contemporary China is clearer in the brutal character of those camps than in the shiny nightclubs of Shanghai. This, however, makes China an unlikely partner in efforts to remake North Korea: what is transpiring in Xinjiang demonstrates how much Beijing has in common with Pyongyang.  In contrast, the US has an important history of insisting on a respect for human rights, and it should certainly do so in this case too.  Yet in the current political environment, domestically and internationally, there is sparse evidence of any strong will to pursue human rights issues: witness the inconsequentiality of the United Nations votes on Syria. To be sure, difficulty in the implementation of norms is not grounds to abandon them, but human-rights ideals alone are apparently insufficient as the foundation of an effective policy.

Secondly, it is crucial to keep in mind the extent to which the Uighurs pose an irredentist threat to China, and, perhaps more importantly, the extent to which Beijing acts as if it genuinely faces a potential irredentism in the Uighur pursuit of autonomy.  Beijing may be looking at the prospect of Uighur independence in a manner analogous to Turkish fears of a Kurdish state. In fact, anxieties concerning Uighur independence have a compelling historical basis. The Qing  dynasty conquered the region in the mid-eighteenth century—the Chinese roots are not deep—but its control did not last long. A Uighur revolt in 1864 led to the establishment of an independent kingdom, which major European powers even recognized.  While the Qing were able to reestablish some control two decades later, the region remained caught up in the tensions between England and Russia for domination in Central Asia and later the competition among Chinese warlords. Uighur nationalism erupted again in the early twentieth century, at times with the support of the Soviet Union. While a Uighur republic that emerged in 1933 was quickly defeated, a second republic of East Turkestan lasted from 1944 until 1949 when it was occupied by the troops of the new People’s Republic of China, insistent on defending an expansive version of territorial integrity. Against the backdrop of this history, Beijing is surely apprehensive about the possibility of a separatist movement that could upset its efforts to stabilize Han domination of the region.  However, that same historical backdrop can inspire Uighur activists with the memory of an independent state.  Just as with regard to West Asia, where there have been recent discussions about the potential redrawing of colonial era borders (Sykes-Picot), an analogous process of rethinking imperial geography in this part of East or Central Asia may be looming.

A third consideration legitimately views the region as a crucible for Islamist terrorism. Of course, this is a fraught rhetorical terrain, since despotic regimes regularly denounce any opponents, including both human rights activists and minority proponents of national independence, as “terrorists.”  Yet just because Beijing may abuse the accusation of terrorism as a vehicle to obscure its agenda by denouncing all its opponents, we should not ignore the genuine threat of a terrorist potential. Uighurs have been among the fighters associated with ISIS, and as they return home from the Middle East, they will bring with them battlefield experience and a presumably hardened ideology. With an enhanced capacity to deploy violence, they may view the Uighur conflict with Beijing as an opportunity to fuel an explicitly jihadist campaign. Muslims in Xinjiang have real grievances as the government attempts to prohibit religious practices, and this situation can provide a platform for terrorist radicals. The analytic challenge, familiar from other contexts—recall the Obama administration’s inability to designate any terrorism as “Islamist”—will be to distinguish between the violent jihadists and the larger Muslim population. There is no advantage in pushing the latter into the arms of the former.

Fourth, the emerging Uighur crisis can develop into a challenge to China’s Belt and Road initiative, the ambitious plan to extend Chinese economic and political power across the Eurasian continent. In the most elementary geopolitical sense, China’s path to Central Asia leads through potentially irredentist territories in Xinjiang and Tibet.  The Chinese claim on both is tenuous, which has led to concerted efforts to increase their Han populations, programs that have in turn produced local resentment. Yet these are the regions through which western trade routes could pass.  To be sure, such spatial vulnerability could be mitigated through alternative routes, especially sea trade, or expanded military presence, but there is an even more important cultural dimension pertinent to Belt and Road. As China engages in increasingly repressive measures against the Muslims of Xinjiang, solidarity effects are likely to emerge elsewhere in the Muslim world and especially across the parts of Asia in which China is eager to expand its business interests. A perception of hostility to Islam might for example impinge on the considerable ties with Pakistan, undermining historical connections between Beijing and Islamabad.  An intriguingly different case would involve China’s rival, India, with its large Muslim minority (the second largest Muslim population in the world) for whom attacks on Muslims in Xinjiang could shift foreign policy attitudes. Further to the west, the effect might be even stronger: a perception of a hostility toward Islam may well hamper China’s efforts to increase its influence in the Middle East.  More ominously, the persecution of the Uighurs could also have a ripple effect in Indonesia and lead the growing Islamist contingent there to attack the local communities of overseas Chinese. There is a tragic history of ethnic violence in Indonesia, with the largest Muslim population in the world, and religious tensions have been growing again, even seeping into recent elections. Beijing claims to take special interest in the well-being of overseas Chinese communities, but its own campaign in Xinjiang may jeopardize the Indonesian Chinese, whom Islamists could view as accessible targets.

Fifth, Xinjiang raises poignant questions about religion and politics that may play out in complex and unexpected ways in an American discussion. The Chinese reeducation campaign has been framed not only as an attack on Islam, but also as an attack on religion in general. Animosity to religion should certainly surprise no one in a Communist regime. Yet precisely this unrelenting secularism can scramble the potential political impact in the US. Contemporary American liberalism is, to say the least, not religion-friendly. Its secularism is akin to Beijing’s, even if its methods are different.  A renowned colleague once publicly expressed the view that the role of the university today is to take students from conservative and religious backgrounds and turn them into secular liberals. A whiff of China in American higher education? That sort of liberalism, with its aggressive hostility toward religion, will have a difficult time taking a principled stance against Chinese secularism. In contrast, American conservatives have generally stood firmly on the side of religious freedom, but at least since 9/11 they have been deeply suspicious of Islam in particular.  Each side in the new American culture war will therefore face a tough choice on this matter: liberals may hesitate to defend religious freedom in Xinjiang against a secularizing state, while conservatives would have to come to grips with the possibility of defending precisely that religion which they have largely associated with terrorism. Yet the appropriateness of defending religion and tradition against an intrusive state should ultimately be a comfortable stance for cultural conservatives to defend.

An American strategy regarding the Uighurs should take all of the above into account—human rights, irredentism, terrorism, Belt and Road, and religion—but ultimately within the necessary framework of recognizing the primacy of the global competition with China. For that reason, the US should not give Beijing a pass on its anti-Uighur campaign. Xinjiang will not be the major front in the confrontation with China, nor however should the US neglect this Chinese vulnerability. Advocating Muslim rights there could additionally contribute to improving the image of the US in the Muslim world. In other words, the Uighur situation presents important opportunities for the pursuit of American strategic goals. Unfortunately, at this point in the American electoral cycle, all foreign-policy attention seems to be directed exclusively at Russia—not because of the real challenges posed by Russia, but because of the partisan utility of asserting a connection to the Trump administration. This obsession with Russia is a distraction from China and therefore a hindrance in facing the vital strategic challenge. Thinking about the Uighurs can therefore refocus our foreign policy debate on significant realpolitik concerns.