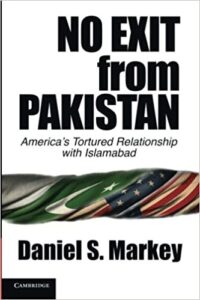 The book covers a tragic and tormented relationship between Pakistan and the United States.  Pakistan’s relationships with China and India, growing population, nuclear arsenal have already threatened U.S. security and world peace. It analyzes how the rise of China will dominate regional dynamics in important ways in the next few decades and anti-American sentiment in the US-Pakistan relationship from 1947 to 2001.

“This analysis is far-sighted and well-considered… a must-read for all policymakers of the region, students of the area or of foreign policy, and academicians concerned with the subject.” – Syed Hussain Shaheed Soherwordi, Associate Professor in the Department of International Relations at the University of Peshawar, Pakistan in Exemplar: The Journal of South Asian Studies.

The author took 25 years to write this book. So it covers much crucial information about the US-Pakistan relationship.

According to critics, America does not wish to allow Pakistan to grow economically self-sufficient to help keep a close leash on its nuclear and missile programs. Keeping a close relationship with the civil and military allows America to monitor China. Pakistan’s large army, if allowed to turn rogue will destabilize the region and the world. While active in many areas of friendship, America will not participate in the defense of Pakistan. The USA will not allow Pakistan to lead the Muslim world by keeping the nation destabilized and under close management.

Destabilization is managed through buying the leadership in the military, political,  media, academicians, and civil servants at the cheap. Simply allowing their children to obtain visas for schools, scholarships, or just issuing visas to targeted officials can do the job. Pakistanis are known to sell their country cheap.

The author dealt with the government officials since 1980 on a continuous basis which gave him crucial knowledge about the officials. The USA has been intertwined with  Pakistani internal affairs since 1947 on a continuous basis. Many documents have been declassified by now. It is crucial to preserve these documents for Pakistan to chart its future course of action if it wants to develop an independent policy.

The author concludes the book by highlighting important options of defensive insulation, military-first cooperation, and comprehensive cooperation. It is a must-read for diplomats and policymakers.

Daniel S. Markey is a senior fellow at the Council on Foreign Relations (CFR), where he specializes in security and governance issues in South Asia. From 2003 to 2007, Markey held the South Asia portfolio on the Secretary’s Policy Planning Staff at the US Department of State. Prior to government service, he taught in the Department of Politics at Princeton University, where he also served as executive director of Princeton’s Research Program in International Security. Dr. Markey earned his bachelor’s degree in international studies from The Johns Hopkins University, his doctorate in politics from Princeton University, and was a postdoctoral fellow at Harvard University’s Olin Institute for Strategic Studies. Markey served as project director of the CFR-sponsored Independent Task Force Report on US Strategy in Pakistan and Afghanistan (2010). He has published articles in Foreign Affairs, The National Interest, The American Interest, Foreign Policy, and Security Studies among other journals. His commentary has been featured in many newspapers, including the New York Times, Washington Post, Wall Street Journal, Los Angeles Times, and International Herald Tribune. He has been awarded grants from the MacArthur and Smith Richardson foundations to support his research, including regular trips to Pakistan and elsewhere in Asia.