Netanyahu and Modi: “A Marriage Made in Heaven” 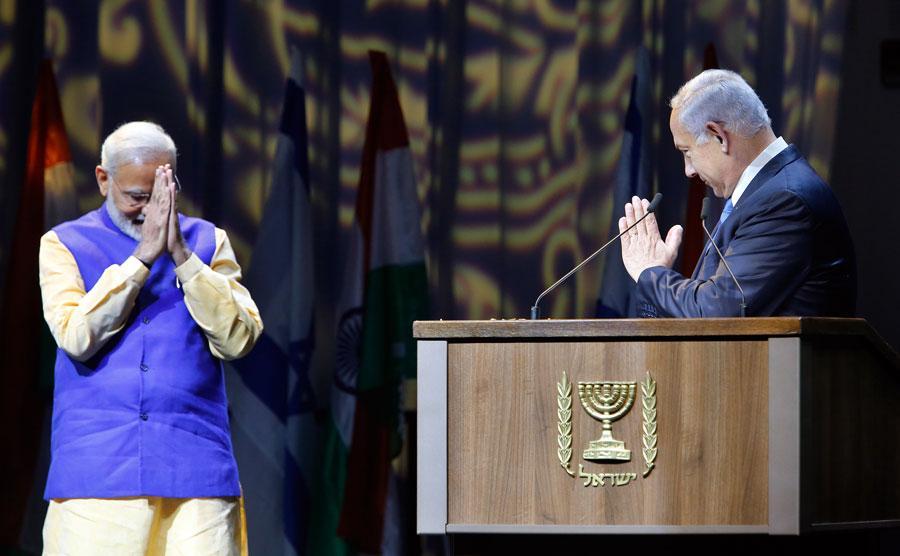 Islam and the Near East in the Far East

NARENDRA MODI ARRIVED in Israel on July 4, the first visit by a serving Indian prime minister to the Zionist state. He was welcomed warmly: here was a leader who could see eye to eye with his Israeli counterpart and who did not share the qualms about his policies that most other democratically elected leaders had expressed. At the end of Modi’s three-day visit, Israeli Prime Minister Binyamin Netanyahu exulted, “We are making history together…It is a marriage made in heaven, and we are implementing it on Earth.”

This was not their first meeting. If this one was a marriage, the engagement took place when the two men met on the sidelines of a U.N. General Assembly meeting in September 2014, a few months after India’s May general election that brought Modi to national leadership.

As right-wing nationalists who see Muslims (some more than others) as their enemies, the two have a lot in common—although, in their encounters, they cloak their beliefs in the internationally respectable language of “anti-terrorism.” Following his latest talks with Netanyahu, Modi said:

“India has suffered first hand the violence and hatred spread by terror. So has Israel. Prime Minister Netanyahu and I agreed to do much more together to protect our strategic interests, and also cooperate to combat growing radicalization and terrorism, including in cyberspace.”

The attitudes underlying his words were perhaps reflected in the fact that Modi did not even make a token gesture of impartiality in the Palestine conflict by paying a visit to Palestinian Authority President Mahmoud Abbas in Ramallah during his time in Jerusalem, despite India’s official support for the establishment of an independent Palestinian state in the West Bank and Gaza Strip.

A month after Modi’s visit, when Israel imposed a clampdown on Palestinian access to the al-Aqsa Mosque, the Indian government stayed silent. Palestinian Ambassador to India Adnan Abu Alhaija called a press conference in which he expressed disappointment at the government’s position. “I did not hear any official response from India on the issue,” he said. “Many countries reacted including Israel’s closest ally, the USA…We expect India to condemn Israeli violations [of Palestinian rights] in East Jerusalem and other places in occupied Palestine…we expect the Government of India to play a positive role.”

Until the 1990s, the Palestinians could normally count on India’s diplomatic support.

During Modi’s visit to Israel, the two leaders were reported to have signed half a dozen agreements, including one on space cooperation. They announced that they planned, in the area of “defense,” to “focus on the joint development of defense products, including transfer of technology from Israel.” This is important to India, as its own arms industry is relatively underdeveloped and unable to meet its armed forces’ needs, so that it has become one of the world’s largest arms importers.

Israel has been one of the biggest beneficiaries of India’s arms purchases. India is now the largest foreign buyer of Israeli weaponry, and Israel ranks second only to Russia as an arms supplier to India. According to a July 5 Bloomberg report on Modi’s visit to Israel:

“Since April, India has inked three missile deals with Israel worth $2.6 billion, two senior defense officials said, declining to be identified as they are not approved to speak about the deals. India’s air force is now awaiting clearance to buy two Phalcon airborne surveillance radars from Israel at a cost of $1.16 billion, while the army is waiting for approval to buy 8,356 Spike anti-tank guided missiles from Israel’s Rafael Advanced Defense Systems, along with 321 launchers, for nearly $500 million, the two officials said.”

Evidently the arms trade has suffered little disruption as a result of the corruption investigations that, in 2012, resulted in Israel Military Industries being one of six foreign companies blacklisted from bidding for Indian defense contracts for 10 years. IMI was accused of paying kickbacks after investigations into the dealings of Sudipta Ghosh, formerly the director general of India’s state Ordnance Factory Board. Suspicions had also fallen on Israel Aerospace Industries and Rafael Advanced Defense Systems.

While Israel is no doubt delighted with its arms sales to India, its other big customer in Asia may not be so happy. Israel is the second largest exporter of weaponry to China, after Russia. Delhi and Beijing see each other as rivals, and tensions between them rose this year over their unsettled border disputes. India is also uncomfortable with China’s “One Belt, One Road” project (see June/July 2017 Washington Report, p. 40), which includes massive Chinese investment in the Pakistani port of Gwadar.

For its part, China recalls how its own bid to buy four Phalcon airborne surveillance radar systems from Israel in the 1990s was cancelled by Israel in 2000 under intense pressure from Washington. The U.S. government considered that China’s acquisition of the systems would further tilt the regional balance of power toward China, especially vis-à-vis Taiwan. Three years later, however, Washington approved the sale of the systems to India, fully aware of the rivalry between the two Asian giants.

John Gee is a free-lance journalist based in Singapore, and the author of Unequal Conflict: The Palestinians and Israel.